I got a lot of requests for instructions on this cake. I'll try to explain it so it makes sense

First off, I cut the bottom cake board out of foam core and covered it. The bottom two cakes are chocolate mud cakes. I figured it would help to have two dense cakes on the bottom...I'm sure you could substitute other dense cake. The cupcake cake is WASC cake and the sundae is rice krispie treats.

Two cake wedges: I baked a 14" cake and cut it in 6 equal slices. Each cake wedge was three layers of this, on it's own cake board.

Cupcake cake: I used various sizes small round cakes, graduating up
and then down like this: 4", 5", 5" 4" I'm not 100% sure that these were the exact sizes though, but you get the idea. Then I carved down the cake to the general shape of the cupcake, leaving a platform where the sundae was going to sit. After the BC layers, I used a rope of fondant for the swirl on top, and swirled it so it would go around where the sundae would be sitting.

After I made these three cakes I doweled and stacked them, just placing them where it looked right. Hanging over the edge just enough but not too much. After I placed the cupcake cake on top of the wedges I drove a sharpened dowel down through all the cakes into the cake base. I did this at an angle leaving a few inches of the dowel sticking out of the cupcake, right in the spot for the sundae.(see pic)

the sundae: I made a batch of rice krispie treat w/ no butter. While warm, I molded the bowl and the three scoops of ice cream, then set aside to firm up. I used a firm buttercream on the bowl and scoops to help fondant stick and fill in cracks. I first layed a thin layer of fondant on the top of the bowl to hide any gaps that might later appear. Then I turned the bowl upside down and covered it from the bottom, using a rotary cutter to cut around the edge. Using a little BC for glue I placed the bowl onto the dowel sticking out of the cupcake. I used a toothpick and a little BC glue to attach the first scoop of ice cream. Then, because it seemed a little unstable I drove another sharpened dowel down through the ice cream, bowl and into the cupcake cake's board.(pic) Then I attached the other two ice cream scoops, also with toothpicks. To cover the scoops I rolled out the fondant fairly thick and then cut around the scoop with the rotary cutter, leaving some fondant around the edge to shape. (pic) The sundae topping I made using a large 5 petal rose cutter that I cut into shape with a small rotary cutter and an exacto knife. 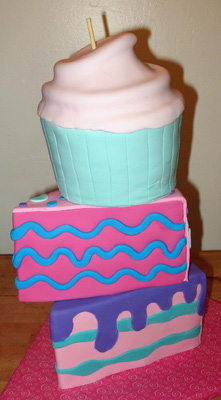 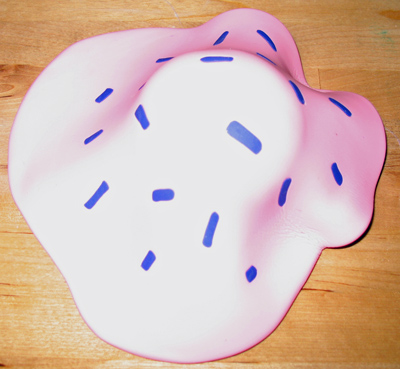 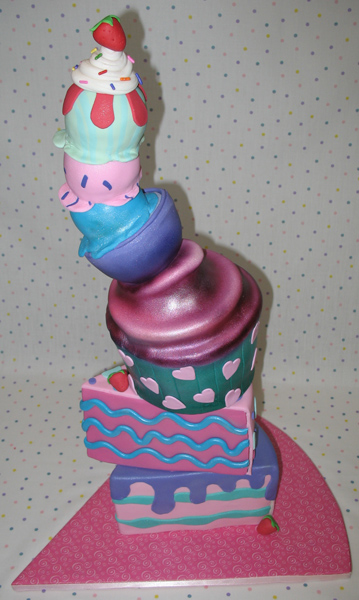 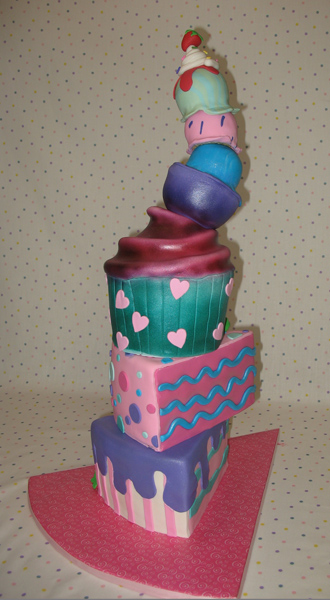 Absolutely amazing! Thanks so much for sharing these great instructions and photos!!!

As a non-professional- I'm absolutely awed!
You are really nice for sharing your instructions!

WOHAOW! That is really cool! Thanks for sharing the instructions.

Thank you SOOOO much for posting and explaining your directions!!! Now I can attempt to try something like this.

Thanks for sharing the instructions. It is A Great cake WOW .

this is a challenge for an experienced artist.
Thank you again, I will save this instructions and study them

Wow, thanx for posting! You are truly amazing as is your cake!

Thank you for sharing the instructions to your wonderful cake. I hope some day my cakes can look like this. Again thank you, Jaime

Thank you for sharing, you did an amazing job, for right now I will just admire, hopefully I would get the courage to try to make something this beautiful.

WOW-that is really cool and SO much fun! Thank you for sharing instructions...not that I'll attempt it!

Wow! That is one amazing cake! I may get brave and try something like it....one of these days.

I love it! It's SO AWESOME! I would like to try it too..but I think I'll wait a little while. But thanks for sharing the pictures! Tutorials are always so helpful!

Cool! Thanks so much for sharing

Thank you so much for taking the time to write these instructions and for sharing. This is why I love CC and it's members.Thank you everyone who takes there time to share your talents with newbie's like me.

That is so AWESOME! It looks like you could enter in a FOOD TV CAKE CHALLENGE & not only be able to hold your own (FOR SURE!), but win too! Thank you for being so generous & give us the instructions. I'm gonna do it for my daughter's 3rd birthday. YEAH!

Thank You for sharing. Cant wait to try this.

Thanks for the nice words everyone!! I'm glad I could share on this one....I'm not always the best at getting back to PMs. The computer is the first thing to go when I get really busy

Simply amazing. Thank you for taking the time to explain and share your wonderful work.

That is amazing! You are TRULY talented!!

That is so cool! Thanks!

Thank you for the instructions.

Very much appreciated! Photos always help a heap! It's so very nice of you to take the time to put this together.

this is beautifull!!!!thanks for the instructions

That is one of the COOLEST things I have EVER seen! You are so amazing for sharing this with us all!! YOU ROCK!

thanks for sharing love it!!!!!

What a sweet cake...thanks for sharing.