forgot I just saw a bumper sticker today that made us laugh:

"Don't interfere in the affairs of dragons, as you are crunchy and good with ketchup."

I kid you not. We had to think about it for a minute, then we all started laughing.

Also, my dad just took a picture of a place called "Ann's Beauty Supply and Wigs". But it was shortened on the neon sign to "Ann's B/S and Wigs"...

I guess there's quite a market for that in DC...

I thnk these are all so great. I am having a hard time reading them and not laughing too hard, cause everyone is asleep.

I only have 1 name; Some years back I used to go buy supplies from a business called Frank N. Stein.

Our second son was due Dec 27 (actual date is Dec 12) and we were trying to decide on a name. Dh wanted Justin ---- "Just in" time for taxes

My Dad went to school with a guy named Stone Wall.

Also, my son's name is Hunter and when I was pregnant with my second, my foolish sister said if it was a boy we should name him Fisher. That way we would have a Hunter and a Fisher.

The bar sign reminded me of my visit to the very small town where I was born. Went into the bar, it has been there for years, the sign says:
"We don't have a town drunk, we all take turns." Got a chuckle out of that.

forgot I just saw a bumper sticker today that made us laugh:

"Don't interfere in the affairs of dragons, as you are crunchy and good with ketchup."

I love this quote

. I've used it before as a siggy quote on another message board. You wouldn't believe the number of PM's I got from people who just didn't understand it

My whole family is nuts on dragons and medieval stuff, so it fits for us. 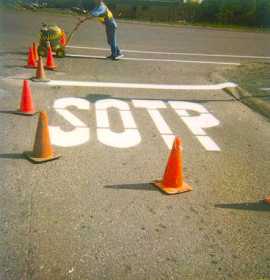 CAUTION: DO NOT read this thread while at work!!!!!

homecook- my son had that dragon one as a tag line on his website for a long time! I loved it!

I went to school with a girl named Holly, last name Wood.

I noticed in an earlier post someone mentioned a Mrs. Moody. My name is Misty Moody. In school, we hada teacher who would always call roll backward. You know...last name first, first name last. My nickname all through high school was Moody Misty.


I went to school with a boy whose last name was Wetnight. And my dad had a friend when I was a kid whose name was Belinda Gay.

My dd, Amanda Sue, is marrying a man with a last name that begins with an "S". Her sister has threatened to give them monogramed his and hers towels for their shower gift.....yup, hers would be A. $. $.

My last name is Dyck, pronounced dick, mispronounced dyke, I lose both ways.

i have an uncle Corny and Harry.

We have some stop signs at an intersection out in the back roads of the county that some one has painted hammertime on all of them..... I

My last name is Ickes and my first name is dara. When I got an email address when my company first got email years ago, they used the standard first initial, and last name - all together - so my new email address was [email protected]

Yea, that was a good one to give to people.

foxymomma521, I was just looking at your childrens names at the bottom of your signature. You have a little one with the initial MMF

I also forgot to mention I have a gynecologist by the name of Dr. Long. I had to edit this to say the name makes my hubby nervous

At a mom-and-pop breakfast place in our town, beside the cash register there is a paper labeled "Customer Complaints" with a mousetrap attached!!

Also, if my boyfriend and I get married, my initials will be M.F.

We were driving down Interstate one night, and came up on a tractor trailer...they had the sticker on the back that said..."My Lights Are On for Safety"...looked at my husband (ex now...anywho), and said, "That's funny, my lights are on because it's dark!" We got a good laugh out of it.

oops hit submit before i was done 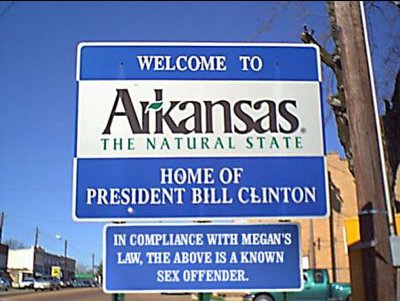 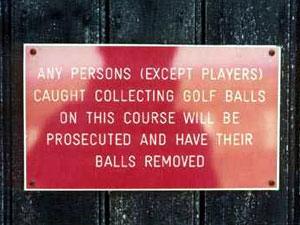 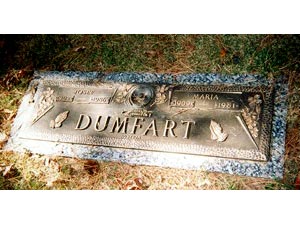 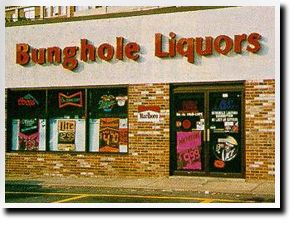 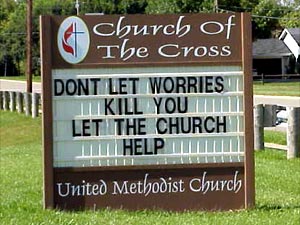 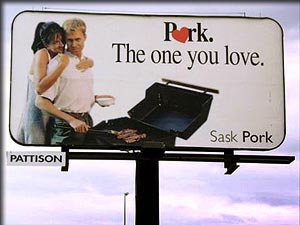 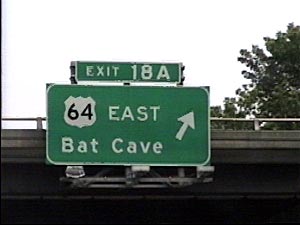 I didn't realize that my own child is a victim of bad naming on my part and he's just turning 12!! LOL Although I did think out his initials - they are "ABC" I did not think about the whole first initial last name deal - which I'm sure he will be tormented with for the rest of his life!! So his last name is Coward (which was my maiden name -anyway.....) and his first name begins with an "A"- SOOOOOO - I didn't realize anything was that big of a problem until he came home from his first days in middle school and written across the back of his gym uniform T -shirt is said
A. Coward!!!! AHHHHHHHHH - how bad of a mother am I???? I never thought about it when he was born - I just made sure his initials didn't spell out anything weird and thought it was kind of cute that it was "A.B.C.)- he looked at me when I realized what I had done, and he was like, yea, mom, Thanks!! LOL I can just think of his future now and all the email addresses he will be assigned when he gets a job - [email protected] Poor kid - I really do feel horrible about it!


Dang - that was an honest mistake - I would have never did that on purpose - wish I wouldn't have been so young and dumb! LOL

And my brother is also a police officer so he is Officer Coward!! He gets a few comments from time to time about that too!

Hey Melody25 that Bat Cave sign looks familiar.....is it in NC-just outside of Hendersonville? I live in Brevard, and I have to say I never really looked at that sign---geesh!

OK here's mine, growing up I was Melissa Ann Dickson (MAD), I married Rick James (not the singer), and did ya'll hear that NC has recalled all of the license plates that start with WTF!!!! I want one of those now!

My sister married a "sepanski" and they named their son Patrick Michael (PMS)
And whoever had the doctor Dr. Finger-just be thankful he wasn't an OB/GYN!!! that would really suck

Okay, this thread's kept me in stitches today. I decided to add to it.

First, it's been mentioned before, but my son had a substitute teacher named Ms. Barfus (can you imagine the abuse she took, especially being a sub?!).

Next, one of my casual acquaintences and fellow PTO member ran for a position in town last year. Her last name is Mass. Her running mate, whom was listed first is named Payne; so it was Payne and Mass.

I went to school with a girl named Temesha Butts, but now when you look her up on classmates.com her (I guess married name) new name is Boozer. Don't know which of those I'd choose if given the choice.

My DH was named after his father, Nicholas, but his middle initial is A and our last name begins with a D. He refuses to have anything with his initials/monogram listed. lol Poor guy.

Then there's a neighbor whose family name is Allen and the daughter was in my son's class and takes the school bus with my kids. The girl's name is the same as mine, except to make it cute they take off the 'e' and add an 'ie'.

And there's the pediatrician around here that I almost used except for the fact that they didn't accept our insurance, so our children don't go to Dr. Frank Sinatra.

My cousin Michele Turzilli got married about 10 years ago to a man whose last name is Strmel (pronounced stra - mel). They moved three years ago to Rochelle Place in NY state. My cousin, Michele Strmel on Rochelle. lol That still cracks me up!!

Almost done: About two years ago my family and I were heading into the City via the Holland Tunnel and apparently there were new condo's or co-op's for sale. A giant sign announced this by saying: "If you lived here you'd be home right now". I turned to my husband and said, "If we lived in our car we'd hardly ever leave home". He thought that was pretty funny.

Finally, a really stupid sign that I've seen on the internet many times and it's suppose to be real:

I actually like this one! After all lingerie often leads to children!

I actually like this one! After all lingerie often leads to children!

That reminds me of a few years ago when I had to return something in the children's dept. in Sears and in walking there I led my DH through the lingerie dept instead of walking around it. He made a joke about having me tease him by walking thru there and I responded that it was quicker than walking around the perimeter and that I couldn't help if they put the store in the proper order: first comes lingerie then comes the children's stuff. He got a good chuckle out of that.

I knew a lady whose maiden name was Wise, and she married a man named Looney.

I love the saying "Procrastinate NOW!".

And lastly, my brother said that the only reason he was putting on weight was because of his 2 psychological conditions: Bulimia and Procrastination...he binges, then puts off purging!!! LOL