My brother has a sign posted near his pool...

"We don't swim in your toilet,
please don't pee in our pool"

No kidding....my middle school guidance counselor's name was Mr. Boner. Could you imagine?

My husband (and eldest son) have the first name of John.....not funny until you realize my last name (hint, check my screen name and remove the mom part)! When I first met my husband and he told me his last name, I said "like doggie?" Used to have a co-worker call me Kitty.............after a while all the jokes become dull...nothing new to hear! LOL!

my husband tells everybody that my tombstone will read--

SHE WAS A PAIN IN THE ASS, BUT SHE WAS NEVER BORING...

my daughter goes to school with a girl named Crystal Meth

I am literally sitting here with tears running down my face, I have laughed so hard! Thank you so much!

I thought is was worth a chuckle

When I was a teenager, my mom took me to Dr. Finger, the foot doctor. I thought that was pretty funny....

I love this thread!!! I've been laughing histerically!

I saw a sign on a truck for a local septic removal place. It said...
We empty septic
We fill pools
Different truck.
I was LOL. I ad to point it out to my sis. I wish I had thought to take a pic of it though.

My Aunt works in a bank and one of her customers pronounces her name "Sha-theed". Too bad her parents spelled it "Shi-thead."

OMG these are all cracking me up!

I used to work with a girl named Shelly Kelly.

My neighbors last name is "Slaughter" - they even have a sign out in front of their home!

My dmil went to school with a guy named Tom Dick and many years later saw him somewhere and said "Oh yeah I remember you' You are Harry Dick!"
My dd's married last name is Midgett. when they had their youngest son they were trying to decide on a name and wanted to name him after her deceased father Richard, but decided against it because of the shortened version that he would be called. You know they say the last name first in a lot of places.

I got a couple more. I forgot my brother in law who works at the post office said one of their mail carriers names is, get this, Mel Maughn. He he

This next one I have to try and post a pic with. Don't know if I can do it. If the pic doesn't come through... it shows a hugh propane tank with writing on the side in big letters that say, NO SMOKING
Flamable Propane Gas

*The funny (scarry) part is that there are two tiki torches right by it!!!

We took this pic when we were on vacation in Hawaii years ago. My dh sent it into Jay Leno. Nothing came of it. Boo hoo 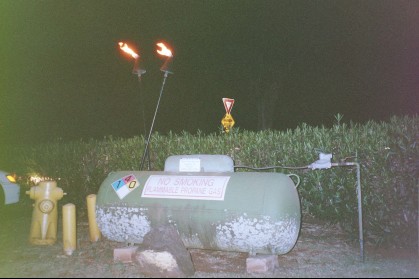 cocobean, where were you at when you took a picture of that septic tank? This will sound so stupid but I swear I have a picture of the same one. It was daylight so no tiki torches, but a beautiful rainbow behind it.

My oral surgeon who removed my wisdom teeth...Dr Gass
Sign I saw at a KFC in Indiana...Gizzards are back! Ewww!
Sign at Jack in the Box in Hawaii has a big spam burger on it

I'm really at a loss for any really funny ones right now. Keep em coming!

bizatchgirl, we were on the island of oahu (sp?) in the parking lot of a resturant (maybe pizza) but, it's not a septic tank, it's a propane tank. Is that where you were?

My sister's friend was pregnant and going through the propects of names for her little boy who was due any day. She told my sister they decided on Jack, well that is a lovely name (I even used it on my son) BUT her last name was Gough. She had her friend say it fast then it hit her, her new son would be Jack Gough. (last name rhymes with Off)

sure seems comfortable in the truck 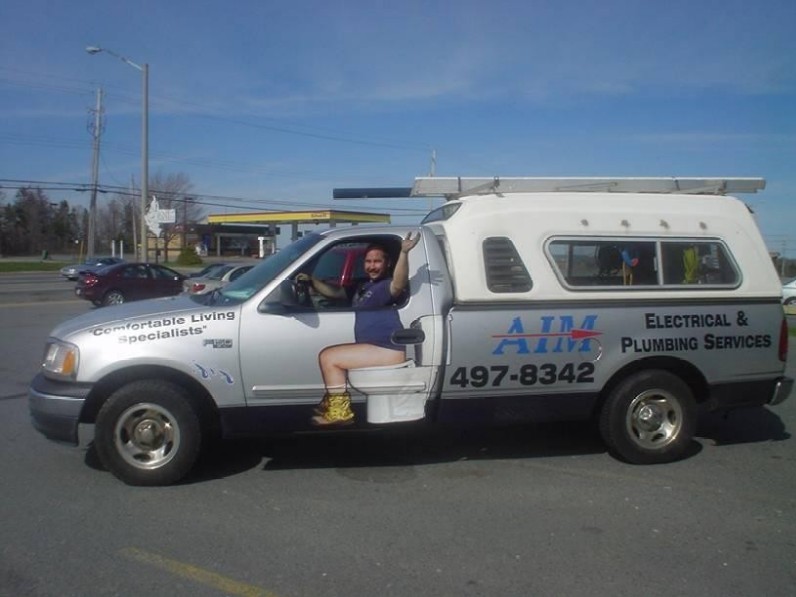 Computer is being cruddy. I can't backspace or back arrow without all of my text disappearing!

I did mean propane tank. Yes, we were at a restaurant too. All of the windows were open to the outside. Casual little place. We had fish and chips. We had been taking the drive around the island on the coastal highway. Then we cut back on the H3 toward Waikiki. I want to say that the restaurant was still north a ways, but fairly close to where we picked up the H3. Sound familiar? I gotta find my picture!!

This is a great thread!!!! My mom's foot dr's name is Mark K. BITOFF! Makes me laugh evertime I see it!

Anyone else find themselves reading aloud to the computer to hear what the names sound like and then laughing hysterically?

Are you kidding mw902? Some of them I have to read aloud just to get them. It's been a long day!

I went to middle school with two girls named Crystal.

One was Crystal Ball, the other was Crystal Lier (middle name? Shanda). Parents can be so cruel.

I don't see too many funny signs, but I'm always taking photos of funny license plates. So far I've got: CHICKEN, BIGHAIR, MNOPAWS, and my personal favorite - FOSHIZL

Ok, just making sure I was not the ONLY one! LOL!

mw902 -really, I think it's time for me to go to bed. I had to read MNOPAWS from brandiscakes like 3 times AND say it aloud before I got it. All I was getting was that MNOP comes in that order in the alphabet.

I went to middle school with two girls named Crystal.

One was Crystal Ball, the other was Crystal Lier (middle name? Shanda). Parents can be so cruel.

I don't see too many funny signs, but I'm always taking photos of funny license plates. So far I've got: CHICKEN, BIGHAIR, MNOPAWS, and my personal favorite - FOSHIZL

I used to work with a Richard Head and all of his "friend" called him Dick...

These are so funny! It took me way to long to get the mnopaws one, but it's hilarious!

My maiden name was Seck, my uncle's used to have a great time answering the phone.. 'Hello Seck's house' One of my best friends is Margo Argo, another friend is Duncan Duncan (his real first and last name).

While driving in Oregon, we passed a liquor store and tanning salon... in the same building, I still laugh everytime I look at the picture.

A bar I worked at for a while had a sign that said 'free beer, yesterday'.

We were at an awards ceremony the other night.... The MC announced a cute little 2nd grader. Grinnon Barrit! I am not sure about the spelling on the first name but....if you sound it out it should sound like Grin And Bear it! We had to work not to guffaw!

this are all too funny, i have 3, two of them I seen and the other one I seen on t.v. one time I went into shoe carnival looking for some shoes and when I found the ones I like the sign said ( i forgot to mention they were having a sale) before $12.99 now $16.99 so I call one of the girls that work there and show her the sign and she kept asking me "I don't get it what's wrong with the sign?" it took her a few minutes but when she finally got it she laugh so hard!

second one, one time my dh and me pass by a neighborhood that had nothing but run down, abandon buildings and right in the front yard of one of them there was a huge sign that said "NEW CONDOS" needless to say I laugh my but off.

third one I seen at a late night show, they usually show funny adds they are real adds this one said "ANTIQUES" MADE DAILY" this was outside an anttique store.

Here's a picture I took at a local McDonald's a while back... I think some teachers were desperately needed, for sure... 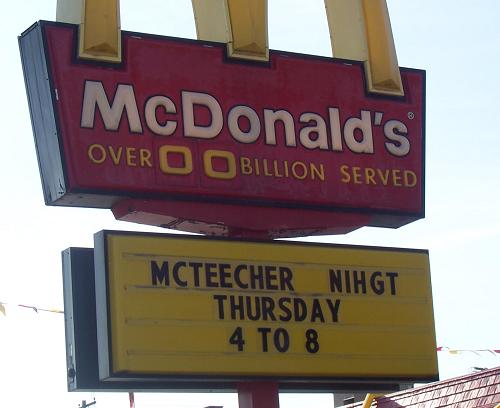 1. I went to first grade with a poor kid named Clay Mudd.

2. Our neighbor later on named their son Grey, which was ok, but their last name was Mass..!!

3. We had a bus driver named Richard Head (got called Dick all the time).

4. And we used to have a local gynecologist here named Dr. Cuteroff (pronounced cut-er-off) gack! I never could go to him.

5. I like the sign that says "All unattended childen will be given a double espresso and a puppy."

6. And a sign we saw on our honeymoon, which we actually took a pic of and still have somewhere, that said:

"OSHA has informed me that, due to the current high number of people riding my a$$, I need to install hand rails for safety, so if you're waiting to ride my a$$, please use the safety equipment, and get in line."

Good night! Thanks for the laugh!