reggie and all -- wow so I got this strand of very large pearls to wind around my tree -- and as I'm removing them from the packaging and gonna put 'em on the tree the sound of them brushing against each other took me straight back to first grade -- with kathleen cloghessy sitting in front of me, susan baranowski in the desk behind me and sister francis' walking up & down the rows, her three foot long rosary swishing across the sides of our desks!!! omg -- I'm seven years old again!

To be honest Boss, I try really hard not to think about that. 14 years without celebrating Christmas with my family, away from my loved ones has been hard enough. Christmas in Venezuela used to be a TOTAL celebration. Before Christmas Eve, all family members gather together to make hallacas. Hallacas are like a Venezuelan version form of a Mexican tamal. It is labor intensive, from the stew, the different fillings, the corn dough, the smoked plantain leaves. The mix of the smells in the air, the laughs, the carols in the background, the many family members that come and go to take turns to help on the many tasks that take place in a single day. Every family used to make more than 200 hallacas... every gathering is imprinted in my memory. I still carry the tradition with my children here, there is 7 of us. We make 20 hallacas in two hours. My children know that I will cry, dance, sing and share with them my family memories all two hours! Back in Venezuela there can easily be two dozen people in a single gathering... you will leave tired, with stew in your eye lashes... but with your heart filled with love and sweet memories for the rest of your life. There it went Boss... 14 years of nostalgia! 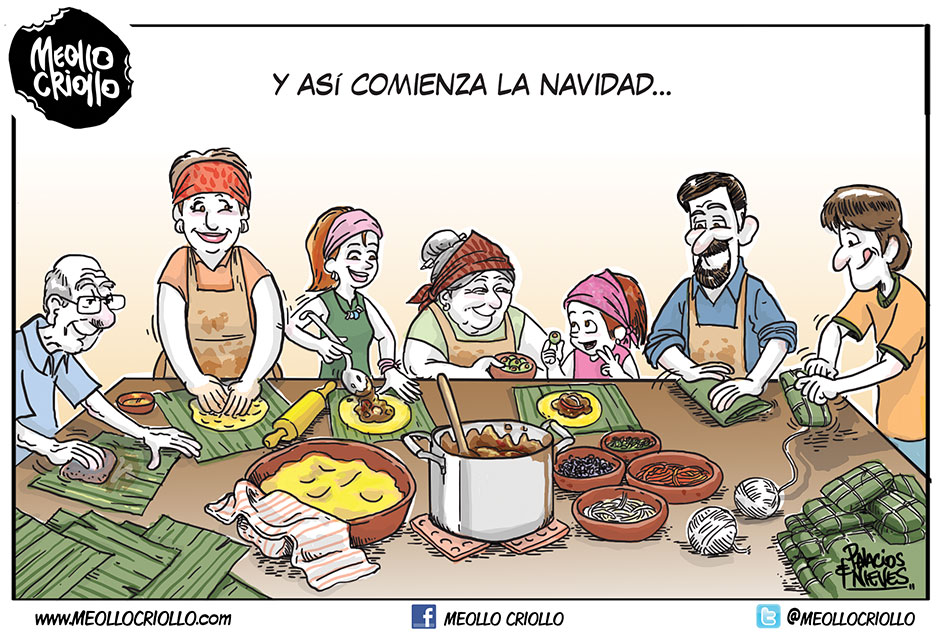 Ahhh Regina So hard to be away from your family…and 14 years is a long time. So glad you’re keeping up the tradition. So how and why did you immigrate to USA??

Oh well, like millions of Venezuelans, getting away from a country crumbling under the weight of communism! My fellow Americans are mad for a 7% inflation rate, Venezuela had 72% inflation in the month of October alone! The salaries of my mom and dad together (my mom, a bio analyst, my dad a lawyer, both retired college professors) do not make $100 PER YEAR! They have power only a few hours a day, no cooking gas, no gas for your car. Who can or want to live in a communist country? Not us!

This beautiful country generously offered us the opportunity to have a dignified life in exchange for hard work, allowing us to preserve our Christian values... couldn't ask for a greater blessing. It hurts deeply to see a handful of Americans supporting communists.

All of your memories make me very sad.  I have almost none, especially early ones.  We lived in a house with a big basement with several small rooms.  No idea how many days before Christmas but mom ask me to get something from the basement  pantry & I discovered my Christmas present … a bike.  Must have been about 10 then.

There was a pine tree on the corner of our property…. One year (I was maybe 8?) it disappeared… dad had cut it as our tree that yr.

Most of my childhood memories are not about the Christmas season.  Thinking now… don’t really remember anything from before I was 8or so.

Oh Regina….I knew Venezuela was bad, but honestly had no idea. At one time it was a wonderful country. I can totally understand you leaving. Is there no way your parents and other close relatives can leave Venezuela??  My husband’s parents were torn from their families in Poland and put into a German farm concentration camp during WW II. Husband’s oldest brother was born in the concentration camp. After the war, his parents went to Belgium to escape going back to Poland, which had become Communist. Father in law worked in the mines. As soon as they could they immigrated to Canada. Father in law was to work up in Northern Ontario in a mine. Mother/father accidentally got off the train in the wrong city. Where husband and brothers were raised. Couldn’t speak English, so Salvation Army took them in, found them a place to stay. Best accident that ever happened. Mother in law didn’t want father to work in the mines. Father got a factory job. Wasn’t a easy life, they struggled financially, a lot, but they were safe…❤️

kakeladi/lynne I’m so, so very sorry you have sad memories  :o(   I had a difficult childhood, but my faith helped me get through…and I chose not to dwell on the bad memories. Had to work hard not to allow those memories to define me. I know now, my parents were flawed, did the best they could. I’ve created new happy memories. I’m sure you have some wonderful memories as well.  ❤️

reggie -- i did not know those stats but i know it's similar to cuba -- i know your mom is there and that that can't be good for her or anybody -- i know it was once a thriving, wealthy, very desired place to be and that communism killed it fast and hard -- and while 7% inflation is a wonderland by comparison it's that slippery slope -- to me if things don't turn...

i've really been liking this verse -- i have a parallel bible -- kjv in one column and the message right next to it -- so in the message it says "i beg you with all of my heart, smile (!) be gracious to me just as you promised" ps 119:58 -- so that verse helps keep me smiling because i picture Him saying the first half to me too --

reggie -- so at first i thought all seven of you each made 20 eye yah cahs in two hours but on the re-read i see you've got 20 for seven peeps -- my question is -- who only gets two? six of you get three a piece to total eighteen so the seventh person only gets two!!!

I have CRS disease, you know the "Can't Remember S-it"  about much of the past.

Merry Christmas and a very Happy New Years to all in the caking world, Cheers from MBalaska

Christmas eve my dad would fill a bowl with nut in shell and fruit (bananas, oranges, and apples) while my mother made her desserts. After my mother prepared desserts, I would help of course, she would take a nap before santa came. My dad would get up to put the turkey on a very low heat sometime during the night so my mother could make dressing in the morning.

Hey MBalaska.... is that CRS disease contagious? You know I have a few things here and there I don't want to remember! Merry Christmas to you too!

littlejewel -- that is a lovely memory! beautiful that your parents worked together like that p!us the bowl of fresh goodies --sweet

and I love that poem! so true

Boss...I like your Russian accent better...Let's see, repeat after me:

By the way, this year we only made 16 Hallacas. My little ones are NDP's. That is my husband's former boss acronym for "Non-Discerning Palate's"... My husband came with an updated version of "Non-Deserving Palate's" Anyway, Hallacas are too good for them! Especially for the rascal...He survives all Christmas out of just cookies!

Regina Those Hallaca’s sound soooo delish. But like our Polish pierogis, labour intensive!!!