I need to make a cake like this one and am wondering if anyone knows how I would get the perfectly crisp stripes since I dont have an air brush, I was thinking of either getting the wilton spray color or painting with a paintbrush... Thanks so much for any ideas you might have!!!

Here's someone who has done a lot of them, maybe if you email her she would tell you how she does it. http://www.janetscakes.com/simplycakes.html

If you find out, please let the rest of us know too!

Practice this technique with a few scraps of fondant and you'll see how much easier this is than painting. Plus it looks closer to the cake you linked to, and nicer, I think.

Cut stripes out of two different colors of fondant. But make them slightly thicker and thinner than how you want them to end up. Lay them on your counter, lined up against each other, up alternating red and white.

Take a rolling pin and gently and evenly go over this, rolling in the same direction as the stripes, just a few continuous rolls, from end to end, until the stripes are the right width and whole thing is the right thickness.

When you're done, the stripes will have merged into one sheet of fondant. How even the stripes end up is dependent on how evenly you move the rolling pin. It's not as difficult as it sounds.

Thanks so much for that link...unfortunately for some reason it wont let me email her... ARGH!!

Good to know....thanks! I'm wondering if there's something I can put on the fondant like a stencil...I keep thinking of putting tape stips down, then painting or spraying and then taking the tape off but that will stick too good and probably rip the fondant...don't you think?

I think if you're going to make it by putting stripes together, it would be easier to lay them on another piece of fondant so that you can pick up the flag and drape it. As long as they're the same thickness, when you put them together it will look like one piece and then you won't have the distortion from rolling it.

The fondant may not rip, but you have to make sure that the spray doesnt get under the tape and onto the other color.

I've airbrushed tiny gingham checks on fondant using tape. It was tedious, but it worked well.

To prevent the tape from sticking to the fondant too well, I pressed it on a kitchen towel a few times to remove some of the adhesive, then taped the stripes.

To do the gingham, I had to remove the tape, give the fondant a half turn, then reapply the tape and airbrush again. Yeesh. Now, I just use edible image gingham. LOL

Anyway, the tape worked great. You'd want to roll out the fondant a little larger than you need so you could trim off any messiness on the edges.

I agree with Texas Rose regarding placing the alternating colored stripes on a fondant backing. I've done this many times and it works well. Be sure to glue the stripes to each other as well as the backing so they don't come apart while you're arranging the flag. 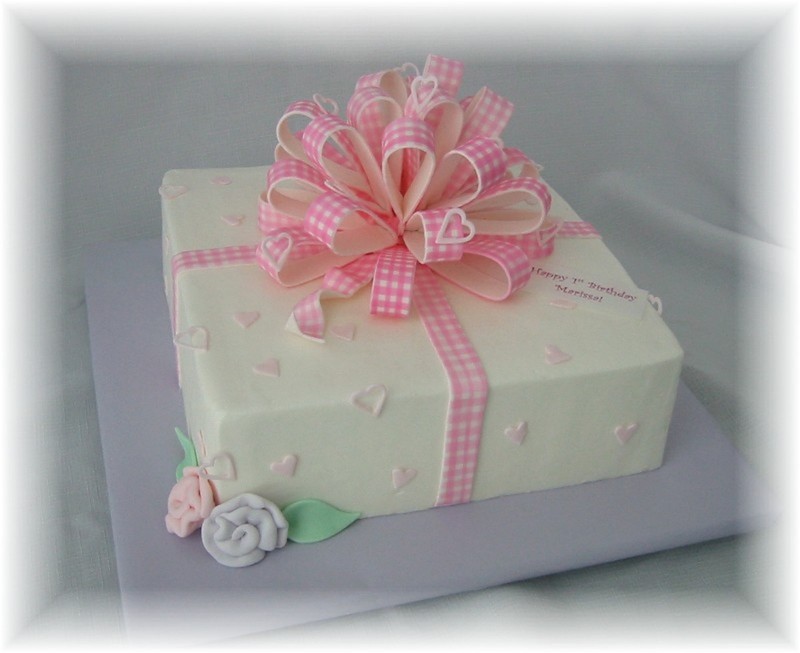 Oh great idea TexasRose!! I dont know why I didn't think of that....DUH..

Thanks for the tips Diane...I think I will try that with the tape! I really want this cake to look really nice. I will probably practice doing it both ways with the stips and the tape/painting...see which works better for me!

THANKS FOR ALL YOUR IDEAS EVERYONE!!

Oh and Diane, your bow is AMAZING! The Gingham is PERFECT!!