Has anyone ever put a Laminated picture on a cake then put a border around it.I have a Anniversary cake to make and wanted to put a picture on it but the lady doesn't want the edible ink which I don't have anyway. Any ideas are welcomed.

I haven't personally done it, but I've seen other people do it. I think it would work fine. 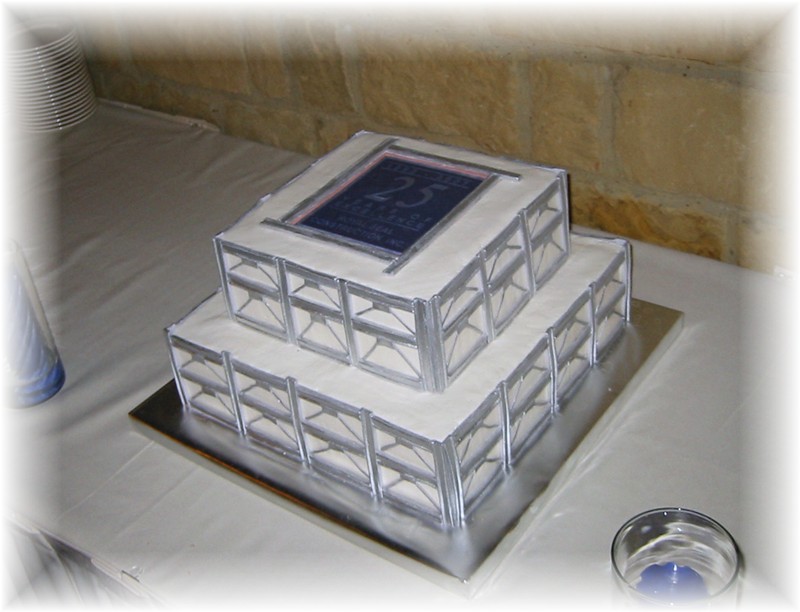 I haven't done it, but sounds like a great idea!

I'm going to write that one down. Sounds like a great idea to me.

I do it ALL THE TIME! Make sure you cut the plastic with a ridge around the picture sealed well, the first time i did it, I cut around the actual picture which left the paper edge exposed enough for grease to set in.

Interesting! I never would have thought to do that.

Thanks for the tip LittleLinda!

I did one on a cupcake cake after I got tired of fighting with my edible ink printer! 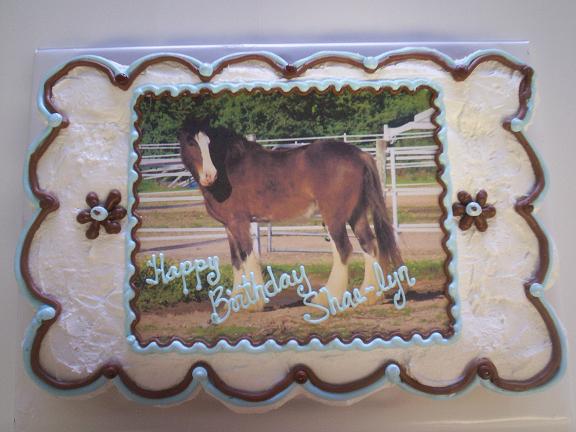 Has anyone ever put a Laminated picture on a cake then put a border around it.I have a Anniversary cake to make and wanted to put a picture on it but the lady doesn't want the edible ink which I don't have anyway. Any ideas are welcomed.

That when you trim the laminating plastic around the photo, don't cut to close....if the plastic isn't sealed together really well and you pipe a border around the image, moisture and grease can seep in by capillary action.....had it happen once. Other than that, I've done it many, many time with no problems.

Like you, my customer did not want edible icing, she wanted to keep the Chivas label however trying to get a laminated label to bend around a cake bottle and stay would have been impossible, In the picture I have attached, I did not actually laminate the label, I covered both sides in clear contact. That way it kept it flexible so I could attach it around the bottle - a laminated one would have been too rigid.

You laminated one will be fine. 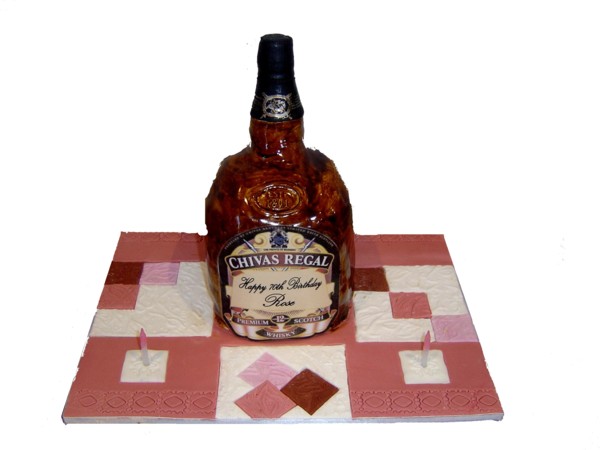 Anyhoo can i pop in a question......so is the laminate ok to put directly on buttercream as well as fondant then? Or do you put something extra underneath the photo?

That when you trim the laminating plastic around the photo, don't cut to close....if the plastic isn't sealed together really well and you pipe a border around the image, moisture and grease can seep in by capillary action.....had it happen once.

You can add them straight on to BC or fondant, as mentioned by "Jeff_Arenett, make sure it is still sealed when you trim the edges.

Good luck with that.
Kim

I don't have an edible image printer so when I did my wine bottle cake I just rolled a very thin gumpaste sheet and put my label on that. Then I stuck it on to my cake.

I've printed the image onto a clear overhead projector sheet. The ink side is face up, so the ink has no contact with the cake. It only works with a white or very light colored cake.

I've used a laminated photo on a cake with no prob.

Leahk, that idea of printing onto an OHP transparency is a great one. I hadn't thought of that. And it would be more flexible than a laminated pic too.
Thanks for the tip.

I did not actually laminate the label, I covered both sides in clear contact. That way it kept it flexible so I could attach it around the bottle - a laminated one would have been too rigid.

That's an excellent idea too!
Here's a cute cake with laminated photos I just did this weekend.
http://cakecentral.com/modules.php?name=gallery&file=displayimage&pid=1444531

Before I started doing my own cakes, I was getting them from the local grocery store. One year, my DD wanted a cartoon character on her cake - Atomic Betty. Unfortunately, Betty was so new on the scene, there was nothing out there (as far as cake toppers go). I asked the cake people if they would scan a photo, but they said because of copyright, No. I then asked if I provided a laminated photo, could they put that on. No problem. So I made up a cake topper that covered the whole thing, and they just piped shells around it to keep it down. DD still has that laminated picture on her wall.

FWIW contact paper is not considered food safe (there are a few threads on this - that info comes from the manufacturer itself). Since it's a flexible plastic it's got the dreaded phlalates in it I think (good grief don't make me look up the spelling on that one LOL). I use it for cake boards all of the time but my main cake is always on its own cake circle first. If I were to try it to cover an image with it for use directly on my icing, I would probably place it on some kind of barrier, whether parchment paper, a strip of fondant meant to be removed, etc., something that would keep it from coming in contact with my cake. JMO!

Not trying to start a debate about the safety of contact paper; just trying to make sure y'all know what the manufacturer says about that product

yeh i would feel better about putting a piece of paper, baking paper or something underneath it too

walmart will make edible images for you if you ever need one just take them the picture and they put it on frosting sheet for you cost 6.50.

Thanks. I missed those threads.

wow...i've actually never heard of that until now!

wow...i've actually never heard of that until now!

Well I have to admit: "I read it on the Internet" (here, in fact) but at the time, the CCer emailed the manufacturer about it, and she pasted in the answer into the thread. They would not green-light her use of the stuff for food products. The part about the phthalates is a guess on my part based on what I know about what products phthalates are found in (specifically: flexible polyvinyl chlorides...which is what contact paper IS). It might be time for another call to the mfr to find out if the product is food safe now?! I rather doubt it based on its intended use (i.e. as a shelf-liner, book cover, laminating medium, etc.; none of my contact paper states that it should/could be used as a food prep or display tool), but you never know!

If I can ever track down that thread, I'll post a link

ETA: OK two bits of info. First, from Wikipedia, the explanation: "Because phthalate plasticizers are not chemically bound to PVC, they can easily leach and evaporate into food or the atmosphere. Phthalate exposure can be through direct use or indirectly through leaching and general environmental contamination. Diet is believed to be the main source of DEHP and other phthalates in the general population. Fatty foods such as milk, butter, and meats are a major source."

Next, the original thread. Wasn't lost in the crash, yay! http://www.cakecentral.com/cake-decorating-ftopict-289113-.html As you can see if you read the thread, people still debate its safety, but my only point was that the manufacturer would not affirm that the product IS actually safe.

Edited YET AGAIN to add a link to this thread with more info http://www.cakecentral.com/cake-decorating-ftopict-601707-.html