Think My Friend Hated Her Cake : (

OK, so I made a cake for a friend (not one of my best friends, but someone in my mom's club). It was for her son's birthday. I only charged her $25. She asked for a 9" round cake, soccer-themed, fondant, she only wanted black & white, plus she wanted a "2" and "Happy Birthday Andrew" on the cake. When I dropped it off, she didn't say much of anything. I asked her if she liked it and she said yes, but wasn't very enthusiastic about it. She didn't make any other comments, just handed me the money & that was it. I don't need someone to gush all over my cakes, but I got the sense she was disappointed. I'll ask her how she liked it when I see her next week, and hopefully it will go better. I know it was what she said she wanted, as she confirmed in email (although maybe she envisioned something different and didn't communicate it). After spending several hours on her cake, I guess I just hoped for a smile & a "thanks"! Anyhow, I just needed to vent to those who would understand. Thanks for reading if you made it this far!

Oh, here's the cake (pic looks a little blurry in the forums - in my photo gallery it's clearer): 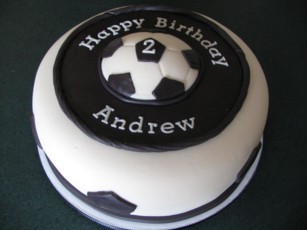 I think it looks Superb!!!! If that is all the color she wanted.Yah know some people are just not gushy,comment making people.I have found that too when some customers come and get their cakes and the expression is sort of lifeless and others gasp and hug me and can't Thnak me enough....Trust me if she hated it you would know.It probably isn't the kind of thing she really gets inpressed over!! Chin up!!! It looks great!!!

It's adorable! Maybe she had the ball-shaped pan in her mind?? Could be she was just busy with the party stuff. I'm sure it will all work out fine, especially after all the other guests gush about how cute it is!

I think it's a great cake (I'll def be saving it for future reference!). I think you made great use of the limited choice of colours and incorporating the football theme (sorry, soccer! I'm English!)

I can't see anything about it that she could be unhappy with, and aside from the great design, the finish looks flawless.

Maybe she was just preoccupied!

Are you kidding me???

That cake is amazing!!!

Maybe she was quiet because she felt like you were being paid too little!!!

Your cake looks wonderful, I would be excited to have purchased a cake like that for so little!

I'm sure she did.

She probably felt bad that she can't make something that good. Or maybe she was embarassed

Your cake turned out fabulous! Don't give her reaction another thought....maybe she had something else on her mind at the time! I'm sure she'll be more responsive next time you see her!

I think you got the reaction that you did for 2 possible reasons:

1. Your friend was stressing out over her son's birthday party, and had too many things running around in her head to realize she was giving you a stoneface about the cake.

2. Your friend is not the type of person to gush over anything, period.

I agree with Kiddiekakes...you would have known if she hated it! I wouldn't give it another thought and follow up with her next week when the birthday stress is gone.

Great cake by the way!

As has already been mentioned some people are not comment making, gushey type people. I think you did a wonderful job depicting her wishes.

The cake is flawless and creative and exactly what she asked for!

Realize that you just don't know what is going on behind the scenes when you drop off a cake. A mom may be stressed to the max preparing for her childs party and the only expression she can manage to wear on her face is a blank one. Look in the mirror the next time you have a million last-minute details to finish

(I only know one person who can pull-off a fake smile. I got a huge giggle because a split second before I knocked I could hear her screaming at one of her kids, but she answered the door with the best Marion Cunningham impersonation I have ever witnessed! Lol).

It seems like she probably felt guilty that she was getting that awesome of a cake for such little price. Sometimes people are quite and want to get away with a steal.

Don't think that your cake wasn't good though. It looks completely flawless and to incorporate those colors and the saying - all I can say is PERFECTION!!! Awesome job - Stop kicking yourself over it!!

Thanks, guys. You're right, I think she's just not the type to gush all over. I think it's me more than anything. I'm just having one of those over-tired, stressed-out, kids-are-driving-me-bonkers kind of days, and I probably read too much into it. I'm sure I'll feel better after I put the kids to bed and get some rest (or maybe a nice glass of wine).

Ditto to MacsMom.... you never know what is happening...she might have had a problem with him and wanted to cancel his birthday lol!... Don't project where a person is as there is so much going on in our lives it's insane. Accept that it's her stuff and know you did a great job on that cake!

I got that reaction for a free cake for a co-worker. I was obsessing over it and finally asked her if everything was okay and she yes and it tasted really good. She's very dry. I just came to realize she's not a gusher. I prefer the ego-stroke of the gusher. HAHAHAHA

Don't fret one minute. Your cake is beautiful, it is perfect. My grand-kids went bonkers over it. You did a fantastic job.

What an amazing cake you made! I think it's beautiful...and I can't imagine ANY little boy not going crazy over it! I am SURE it is what everyone else said too...that she is just one of those people that doesn't go crazy with emotion...I bet if she won a car on the "Price Is Right", she would probably shake Bob Barker's hand and say a meek little "thanks, Bob...it's real nice"....LOL
Give yourself a big pat on the back. You did a GREAT job! You should be proud!

Do you know anyone who was going to the party? Maybe you could get some type of feedback from them as to how the mom reacted to the cake.

If you dropped it off on the day of the party, she was probably overwhelmed and just didn't give the right reaction.

I think it is a great cake!

I know how you feel, although it has to be her "way" I have a repeat customer that would rather frown and say "Oh, thank you" than "Oh what a perfect cake!!!!!!". Just how she is. In fact I did her political party cake. First time I had done a stacked 3 tiered cake and my first time with fondant...ya know how much I got paid? Ohhh about 1/2 of what my supply cost was....ya know how much I charge her now? Ohhh about double my ingredients and labor charge LOL, I know it's not nice BUT....she wouldn't consider anything less .... she was born without a smile on her face

But I love her cause she keeps me going....and in her own way I know she loves the cakes...or she wouldn't keep ordering

Thanks again, everyone. Actually, it was just a cake for her family dinner, not a party. She's a really nice person & I'm sure she was fine with it. I think more than anything I just have a hard time reading her. My issue, not hers - it's just been that type of day, I guess (although the glass of wine once the kids were asleep certainly helped!). You all are so kind - I feel much better. Love this place!!!

Your cake is awesome - and I'm definitely saving it in my favs, as we have lots of soccer-loving friends & family!! Fantastic job - don't fret any more on it, not even for a second!!!

Your cake is awesome, saw it earlier and just loved it.

Definately she is not the "OMG, it's great" kinda girl..

I had this happen 2 weeks ago, did a going away mexican theme cake for my brother in laws sister... dropped it off and she said.. that's cute. like the little flip flops on it.
I got the feeling she didn't like it either. I stressed for a couple of days, told my sister about it and she said no, M.... is always like that.
A couple of days ago, my sister called and said oh I forgot to mention J...(my niece) was at the party and M... loved it.. so did everyone.. and my brother in laws ex wife said..yes it's great.. my ex husbands new wifes sister did it... Like I was 2 peas in a pod with her.. LOL
I know we are always are own worst critic.. but I really was worried that she didn't like it.
I like the gushers as well... gives us that little pat on the back that we need sometimes.
Again your cake is perfect!!!

If she's anything like I was getting ready for the family parties for my kids 2nd bdays, she was stressed beyond her limits.

The day was spent organizing dinner, housecleaning, preparations; and you can pretty much guarantee that it will also be the day the baby won't want his nap and is cranky to boot.

I'm sure she LOVED it, its a gorgeous cake!

Sweetie, your cake is wonderful. Plain and simple. The lines are straight, the icing isn't bleeding, etc. You did a fine job on it and you are to be commended -- if not by her then certainly by us! Cheer up little buckaroo!

Looks fine to me too. Soccer balls are hard to replicate and yours looks very nice!!

Remember you can't please everyone.

I first read you post thinking I wonder what it looked like. I scrolled down and WOW! That is one super cake! I can't believe anybody would not be crazy about it. So, there must be some be some other reason not connected to you or the cake that the friend didn't burst out with praises. It is a totally awesome cake!