In a landslide vote, "HOME" has been chosen for our September Theme of the Month!! WOO-HOO!! Let's see what everyone can come up with along these lines! Just remember... it doesn't have to be a literal interpretation, you can stretch the bounds as far as your imagination will let you!

Questions? Check out this link, or send me a message!!

Ok, in an effort to make up for playing the 'sick card' last month, I will be the first to post here! I tried really hard to channel the spirit of NancysFancy, but I don't think I'll be putting her out of business any time soon! But this is ONE of the things I think of when I say the word "HOME". Iowa will always be home to me, and there is nothing like Iowa corn. Or Iowa beef. Or Iowa pork. Crud... now I'm hungry!! 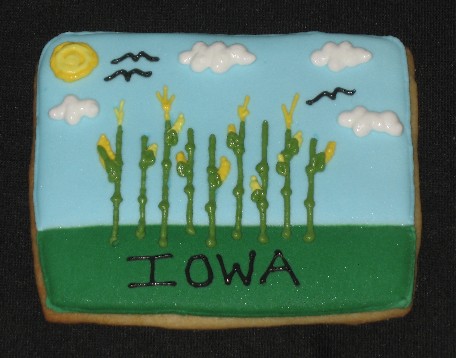 Oh!!! That is one sweet cookie, Melvira! Well done!! ( I see a huge, steady marketing opportunity for every event you cater with this cookie!) You'll be the first to provide it!!!

First let me say, Melvira, I love your Iowa cookie! What great inspiration to get this rolling!

NancysFancy....there are no words! I just visited your website and your cookies and cakes are nothing less than amazing. So intricate and detailed! Without speech.....speechless!

You both are an asset to sugar art!

Thank you all very much! I had to laugh because my grandparents (gpa=92 & gma=89) came to visit for a labor day weekend cookout yesterday. They were corn farmers their entire lives, and Grampa looks at it and says, "Now, what is it?" I laughed and told him it was a picture of one of his fields! He kind of squinted at it and said, "Oh yah... that's pretty good!" They both loved it, but then Gramma put the inevitable finger dent in it!! (It wasn't quite rock hard yet) AHHHH!! Look with your eyes, not your hands!!! But, she's so adorable, all 4'10" of her, that I let her live! It was really funny because I had laid it down and walked away, then I came back and saw it and said, "Alright... who TOUCHED it???" She looked so embarassed!! My sister piped right up, pointing at Gramma and chanting, "She did it, she did it!!!" then explained that she was glad it was Gramma, because anyone else would've been killed on sight! It looked like she touched the cloud on the far left because it was pushed in a little, and there was a finger mark right next to it. Hilarious! At least I already had pix and wasn't intending to display it anywhere.

haha....I know how that goes. The kids know that they risk life and limb now if they touch my cookies without my okay....My Dad has learned his lesson as well. He now says, can I see your cookies, I promise I won't touch them! =) I am getting them trained. Of course once I get good pictures if I am not giving them to anyone then the family has free reign to eat them, or I throw them away.

Melvira your post reminds me of the Iowa song from State Fair-it is now stuck in my head:

"I owe Iowa for its ham and its beef and its lamb,its strawberry jam and its pie. I am Iowa born and bred and on Iowa corn Im fed....etc etc"

When I think of "home" I always think of New Mexico where I grew up. I don't live there anymore, but made a cake in the shape of New Mexico when my sister came to visit me (she still lives there). I iced in yellow and red, the colors of the state flag, which is in the corner. I also put other things that are related to NM. Hot air balloons in Albuquerque, the state bird the roadrunner, Cacti and tumbleweeds in the dessert areas, a pump jack and derrick for all the oil drilling. 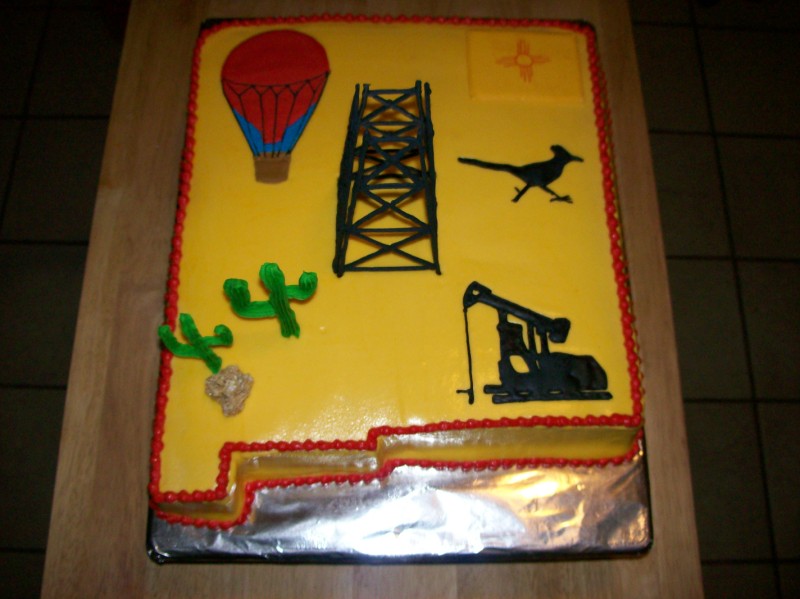 You so beat me too it! I grew up in Albuquerque! My parents still live there, and so I get to go home often. Getting ready to take the kiddos to the Balloon Fiesta, actually! I was debating on hot air balloons or red/green chile somethings!

There are not that many New Mexico related items, I'd love to see what you come up with! I grew up in SE NM, I never got to the balloon fiesta.

My home is Mississippi!! I never thought of doing a cake the shape of Mississippi, so you gave me a good idea, Celosita! Don't hold me to it, though-still learning, but maybe I'll give it a try.

Hey I'm still pretty new in the cake decorating world too. I think you should try. I actually live in MS now! That would be cool to see!

hmmmm... I can think of so many ideas! I will have to bake another "no-particular-reason" cake just for fun. I live in Wisconsin, so there's cheese (i'm picturing big, orange cheesehead!), or basically anything dairy. Or there's always BEER. Hmmm.... I prefer cupcakes or mini cakes (if i mess up, i can try again on a new one!) Possible idea: two 4" round cakes, each cut into 2 layers, each layer cut into wedges, each wedge covered in poured fondant-orange colored (i'll have to look up a recipe... hope it's not too difficult!) Hmm... but how to make it look hole-y?

There are not that many New Mexico related items, I'd love to see what you come up with! I grew up in SE NM, I never got to the balloon fiesta.

I highly recommend it. I live in El Paso now, and we don't make it every year, but I really miss this: 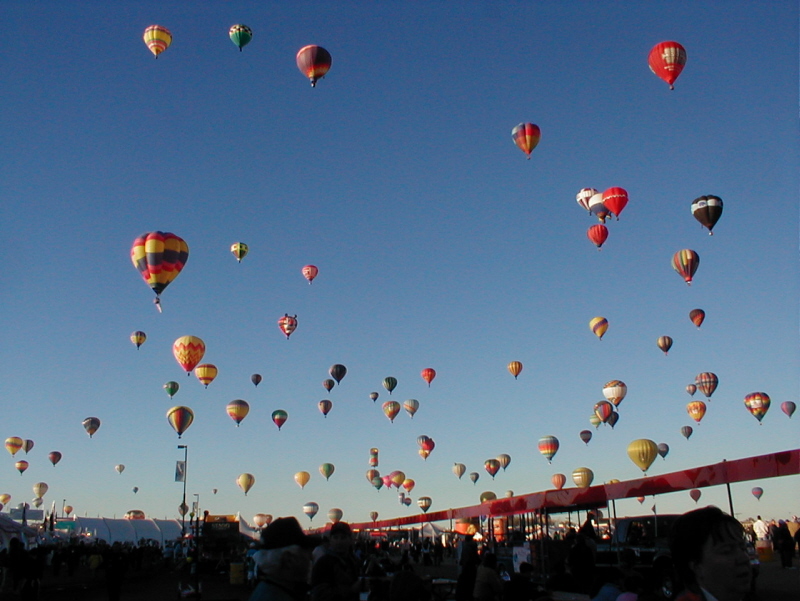 That balloon festival looks like a ton of fun! I lived in Arizona for a while when I was a little bitty thing, and still love visiting there. But I have a question for some of you...

WHERE ARE ALL THE CAKES, COOKIES, and CANDY???? COME ON YOU GUYS!!! I AM REALLY GOING TO BE SAD IF THIS THREAD DIES OUT!!

WHERE ARE ALL THE CAKES, COOKIES, and CANDY???? COME ON YOU GUYS!!! I AM REALLY GOING TO BE SAD IF THIS THREAD DIES OUT!!

I haven't ever submitted anything yet (still kinda new), but I'm working on it. I'm having problems making a quarter-sized chrysanthemum. I don't have a cutter for one, but I do have a daisy cutter. I can't make the petals curl. I don't do gumpaste; just using fondant.

I made this cake for my level 1 cake decorating in March of 2006. It was really busy because I wanted to do a little of everything on it. Here are a few pictures.
I was born in Quebec, lived in Manitoba for 12 years where I met my DH and now we live in Minnesota with our 3 boys!
That is where home is for me!

I made the flag out of colorflow and they were about 2X3 inches, the mosquito and the gopher were also colorflow.
The top of the cake was also dived in 3 part with all kinds of stuff. Just too busy to show! 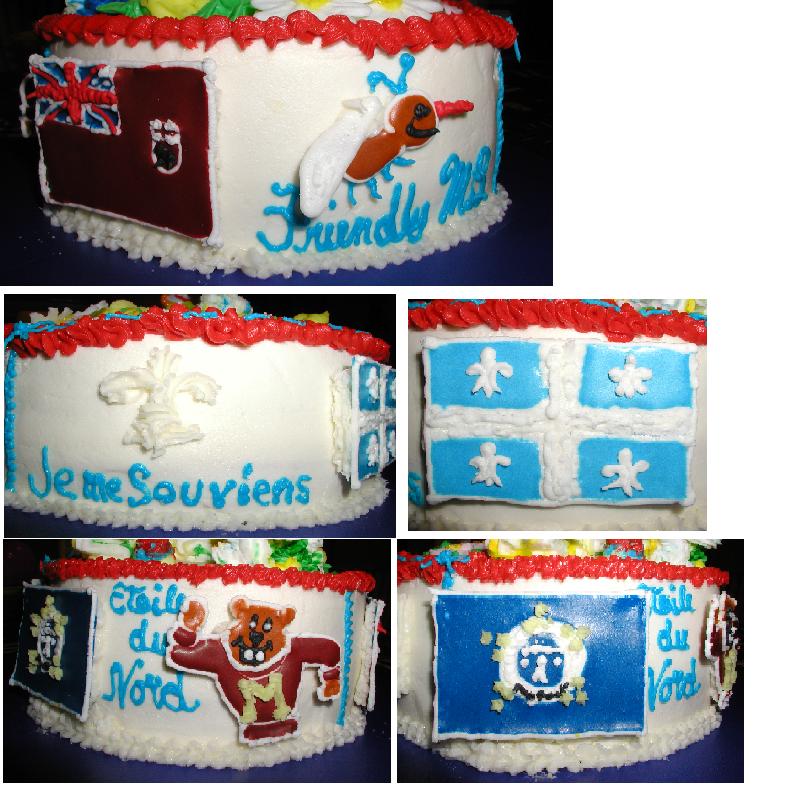 Super cute Gateaux! Thank you for sharing that!!

Nice reflection of the theme gateaux! Cute cake too.

I still know what I want to do, but I haven't had a chance to do it yet. I may be late in submitting something...busy month! LOL. I am making a "chief" cake (our friend just made chief in the navy) I could add that, LOL, since that is something we hope to celebrate in our home next year for my hubby. LOL....would that be stretching the theme too far? I don't want this thread to die either......so come on more posts and pics people. By the way...cool interpretations on the theme to those who have posted. I love to see everyone's take on it. =-)

I don't think that would be stretching the theme too far... that's what this is all about, creative interpretations!

Okay, here is my chief cake it only relates, because this is something we hope will happen in our home next year. I will add a more "home" like submission sometime next week. =) 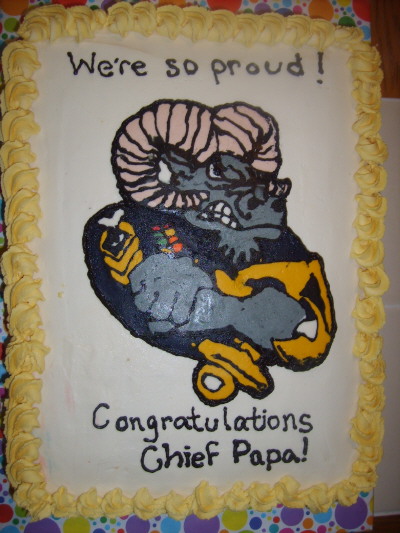 That's very nice freddy... is it an FBCT? Or a Chocolate transfer? I hope it happens for you guys, too!!

Okay I can do this one!!

Tulare county fair theme was Harvesting county wide pride! Here is my theme showing the 10 top producers in agriculture! Mine shows in order of money.... milk, oranges, cattle(steak), grapes, Alfalfa hay, corn, walnuts, almonds, plums and pistachios! Everything is edible except the foam plate and the bucket handle!

Marthajo1, that cake is awesome! That must have taken you forever to complete.
Love you cookie, Melvira.
Celosita002, all those details look great.
gateaux- that mosquito is just too funny-love it!
freddyfl-love your twist on the theme.

Everyones cakes and cookies look so great. I'm hoping I get to submit one this month. I don't know if I'll have the time. We just bought our 1st house and we're starting the move on Monday.

Marthajo, that cake rocks!! Awesome job!! Thank you so much for joining us, that was an incredible piece of artwork!!

Marthajo, That cake is wonderful! Soo creative and realistic, it's amazing! Congratulations on your win at the fair too! So well deserved!!

Marthajo, Great job! That was such a cool idea!