I was the matron of honor in my cousin's wedding this past weekend. I've just recently gotten into cake decorating and the rehearsal dinner cakes were my 3rd attempts. It's in my photos, I've got a lot to learn. They were yummy and nothing was left over. With that being said the wedding cake was done by a local grocery store but came highly recommended and was a decent price. It was supposed to be ready by noon on Saturday for the house party to pick up and deliver and it was going to be frozen since it was an outdoor reception. Well they get there and not only is it not frozen, it's not even ready and the lady went home sick. So someone filled in and they should have just left it covered in white icing and we could have put some flowers on it. Instead they made the ugliest cake I've ever seen and since it wasn't frozen of course it melted and shifted and the bride, my cousin was in tears through out the entire cutting of it. To top it off they used the wrong colors and it looks like they just kind of threw poop looking spots all over it. She will be asking for a full refund but I thought I'd share that I've seen some of cc's "disasters" or "ugly cakes" and well ladies and gents, this one has you beat!! On top of that this and the groom's cake was horrible tasting, so people didn't even eat it, we threw a 3 tier cake away, so sad. 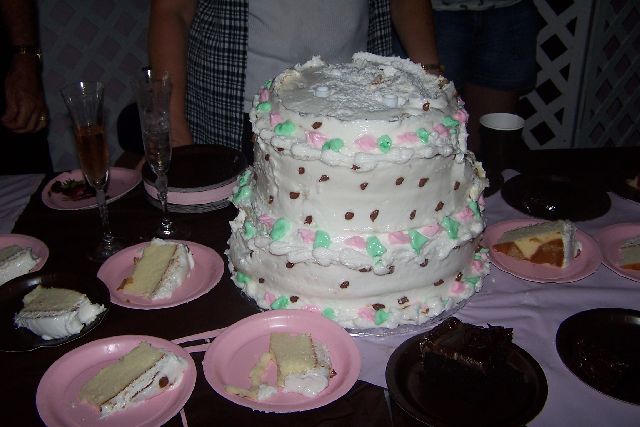 OMG that is just awful. It really does look bad. Poor bride.

Hopefully, she can look back an laugh, eventually.

I feel soooo bad for that bride!!!! I don't even know what to say!

Once we took the cake away she was able to put it out of her mind and enjoy the reception but it was hard for her to look at the pictures afterwards. I'm sure she'll feel better once she gets her money back.

can I ask, Why would anyone pay for that mess to begin with?? I think it would be better to have no cake then a cake that looked like that.

I've been to a few weddings where they had grocery store cakes. Overall......good cakes. That picture you posted is bordering on pitiful. I feel so bad for your cousin..... I wish I could make her another cake.

I really hope that the grocery store does the right thing and refunds her money.

If it's any consolation.....she looked beautiful - even through those tears!

OMG! I just got teary eyed looking at your poor cousin in that picture! No bride should cry on her wedding day

The person responsible should be ashamed!!! She should definately get a refund - no questions asked

I feel soooooo bad for your cousin! What a horrible thing to happen to her and her new hubby on their special day. I know that I would be mortified! Give her a hug from all of her at CC *huggggggg* We can feel her pain

They should be ashamed of the mess they made the party pick up. That is really sad. She is absolutely stunning, as is her handsome groom. I feel bad for them.

. Maybe you could make them another one... a small one just for the two of them or just for the family. It doesn't have to be perfect after all look at what she's already been thru... just make her a beautiful cake that says congrats on it or something and give it as a gift. They deserve to have a decent "wedding" cake regardless of when they get it lol

that is so horribly sad....to see a bride cry like that while cutting her cake. she better get a FULL refund!!

I agree she'd best get a full refund I would show these pictures to the cake people at the store as well as the store manager and explain how badly it ruined my wedding day if I was her....

This is such a sad story, I wish there was something you could do to let other people know how badly the people in this store behaved. It was beneath contempt.

that is ridiculous, i could understand if someone in there family had made it for them, but a professional

Oh, I feel so sorry for them esp. her! What a horrible cake! At least they look great! I hope she will be able to let it go (after a refund, of course) and focus on the bright future she has with her new husband.

Omg I feel so bad for her! How sad is that?! They better get a refund!

Ohh poor baby...that photo is heartbreaking. I sincerely hope they will be able to laugh about this one day...Like how I can laugh that our wedding car broke down! She won't see it now but things like this do make the day more memorable. Wish I could give her a hug...and a free 1st anniversary cake!

What did they do when the cake decorator went home sick??? Get the janitor to finish the cake???

Well, here is a opportunity for you....make them a great tasting great looking cake when you see them again.

I would kick up a fuss and get a refund. Shame on them for selling such a horrible cake and try to pass it as a wedding cake

[Well, here is a opportunity for you....make them a great tasting great looking cake when you see them again]

Now there is a cake someone has the right to complain about.

I can't believe any company would even let it out of their sight. If their decorator went home sick, knowing that they had a wedding then they should have gone out of their way to get it done right.

The person that finished this monstrosity should be strongly repremanded if not let go for bad taste.

I'm so sorry to your cousin. I wish I were closer I'd offer to make her another cake. And her first anniversary cake.

Tell your cousin now to dispair, this is definately not the sign of a bad start. My Wedding cake fell and it didn't effect the out come. Hopefully someday she can look back and laugh.

Thanks for all of your replys and comments, I thought I'd let everyone know that not only are they refunding her 100% for the wedding cake but the refunded her 50% for the grooms cake, it didn't look bad but tasted bad and they gave her some gift cards to different places, so they did redeem themselves and she feels better but the damage was already done. I had made her the rehearsal dinner cakes as a gift and she loved that. They were already paid for upfront otherwise they wouldn't have paid for that when they went to get them. Oh and we found out that since they had to deliver them they sent an older woman with disabillities and a small car with little a/c in Texas in the rain. Just really boor planning and business on their part. But the newlyweds are doing great and getting their money back. Yea!!

OH my gosh how awful for her

I feel so bad for her.

That cake is just awful. I'm glad the grocery store made it right

what are the spots on the sides supposed to be? What a sad looking cake. I truly feel for your cousin.

Oh my - that's awful! My first cake attempt as a child was nicer. Tell her to take these posts with her if they give her a hard time about her refund. I can't believe any professional would allow something like that to leave their shop.

I'm so glad they gave her a refund for that mess. Poor thing. Probably would have been better to have just gotten a couple sheetcakes over getting that...thing. ick!

It is a wonderful ending to this very sad and unfortunate story.

The wedding cake is the highlight of a any wedding and this people really ruined it for her. Tacky!

OMG!!! I am SOOOO SORRY that his happened to the wedding couple! What an awful thing. I am so glad that they did the right thing and gave them a refund plus!!!