Hi Everyone! Can someone help me with the Basic Yellow Cake - Splenda. I prepare everything according to the directions; I don't know what really happened with the finished cake. It never spread evenly around the pan and it never rise up. I got this recipe from the cakecentral web site. This cake was suppose to have been a gift for someone who is diabetic and was very disappointed that it did not come out right. Has anyone tried this recipe before? Cause it does not tell you to spread the batter, it was tell you to pour the batter into the prepared pan(s). I used two 8 inch round cake pan as mentioned. The cake came out dry, but I guess that is expected, especially if I'm not using enough eggs and whole milk. Any suggestions as to why this happened.

Thank you in advance. Have a nice day.

You need to spread it and when I made it years ago, well it rose, but I believe it rises better in a tube pan. Never made it again, I thought it was horridly rubbery! That is just my opinion, but I have yet to try one single Splenda cake recipe that wasn't awful and I don't like the icings either. I had the book and threw it out.
Hugs Squirrelly Cakes

The chocolate one that I made (got the recipe from the Splenda website) just sat there in the pan too. It was so heavy and tough that I chopped it up and made cake balls out of it, and they aren't even very good! Maybe we need to be adding extra baking powder and soda, something is off. Makes you very reluctant to try it again. Janice

my friend made a cake from their web site today and said it didnt rise either. she said it tasted fine just never rose. hmmmmm surely they would have had someone make these cakes before posting the recipes.

Haha, well I forked over a lot of dough for their cookbook a few years back. The whole family was on a diet and I promised everyone a cake after a month of sticking to the diet. So you can imagine how much we were looking forward to it and I had heard that Splenda worked just like sugar when you baked, yeah right! Imagine my horror when I cut the cake, it was sort of like cutting into a Michelin tire. I suspect a Michelin tire would have tasted better. The icing was slimey and horrid, there was absolutely no saving grace with this one. It got ditched in the garbage.
Your sugar and eggs are the things that effect the texture of your cakes the most, I find. So does the fat that is used. When the chemistry of a cake isn't correct, there isn't a thing you can do to make it better and I believe this is the problem.
Three friends of mine bought the book too and all of us felt the same way.
I find that products like Splenda are fine to sweeten a pie filling or a cup of coffee or things like that, but heavens to make a cake with, double yucky!
Diabetics are carbohydrate restricted and generally they actually can have some form of sugar in limited amounts as long as it is taken into consideration with whatever else they are eating at a meal. So generally, I make an angel food cake, which contains only egg whites and a more limited amount of sugar than most cakes. Served with a small serving of a fresh fruit or fresh fruit sauce, this is about as good as it gets. Bear in mind that the fruit is also restricted in portion.
Anyway, just my opinion, but I would rather serve a diabetic something that tastes better than a tire, but in a smaller portion bearing in mind the combination of foods eaten at that meal and using it as a replacement for another carbohydrate or fruit combination.
I have heard that the only good cakes made this way, are the ones that come in expensive mix form and are hard to come by, but worth it.
Anyhow, just my opinion!
Hugs Squirrelly Cakes

yeah my friends family is diabetic. and i mean her whole family. She is trying to find a birthday cake she can make that everyone can enjoy. last year we made cup cakes from some reciepe we got from spenda and they tasted like corn bread. no bad just not like cake. we have yet to figure that out seeing as there was no corn meal in it. lol she uses an icing which is not sugar free but very very low in sugar
she uses one tub of lite cool whip i think it has 1 gram of sugar per serving with one box of sugar free fat free instant pudding. it is soooooooo good. you cant so flowers or borders with it but we are working on getting it thicker so we can. plus it has to be kept in the fridge.

Well at least you have the icing covered, haha, the most important part! Pretty much the issue with the density or rubbery texture is the lack of sugar and the reduced egg content issue.
I am wondering if you could just get away with a reduced sugar cake as opposed to the Splenda recipes which either have no sugar or very little in addition to the Splenda.
Hugs Squirrelly Cakes

here is what the icing looks like on a cake. we used it on both the duck and the cup cakes. 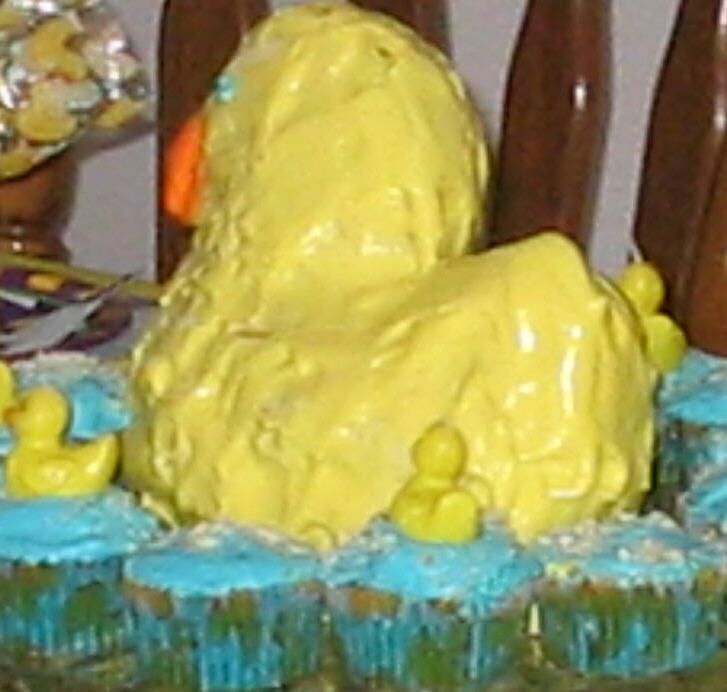 this was her sons 1st birthday. he loves duckys she did the duck i did the cup cakes. we spinkled the none sugar free ones with white chocolate.

Well, how adorable is that, it looks really good, good for you! And, the icing doesn't look like the slime I had made, haha! My girls are 24 and 28 and stil tease me about that awful cake, they both cried that day and they were teens!
love the ducky!
Hugs Squirrelly Cakes

my friend get s the credit for that. just wanted you to see the icing. all i did was help bake the cup cakes and then put the icing on them.

The problem in the rising with Splenda vs Sugar is the super fine texture of it....It's the beating of the sugar and butter that create "air pockets" in the butter (this is by pushing the sugar crystals into the butter), that when baking helps rise because of all the air pockets made by the sugar. Splenda doestn't offer that luxury...As someone mentioned, I believe if ou add more b. powder, it'll help rise better.
Also too, you may want to spray or brush your cake with some butter to help the cake brown somewhat....(so I've read

DID YOU USE REGULAR SPLENDA OR THE NEW BAKING SPLENDA? THERE IS A DIFFERENCE. ALSO YOU HAVE TO ADD A LITTLE BIT OF REGULAR SUGAR IF I AM NOT MISTAKEN. IT HAS BEEN A WHILE SINCE I MADE THAT CAKE. I MAKE THE SPRING FLING WHITE CAKE OR SOMETHING SIMILAR TO THAT NAME. IT WAS VERY GOOD AND ALL THE DIABETICS IN MY HUSBAND'S FAMILY LOVED IT. THEY WANT TO KNOW WHEN I AM MAKING IT AGAIN.

Hi Kate39! I used the regular Splenda are the recipe called for. Just yesterday, I made a applesauce cake with the same Splenda and the cake came out moist and it rise up well. I used a tube pan, 10 inch in size. Everyone at the senior living facility loved it. I am going to try using the tube pan for the basic yellow cake recipe and maybe adding two eggs and maybe a cup of sour cream and see what happens. I spoke with a representative from splenda.com and was told that there are recipes that requires different type of splenda and was going to send me via mail those recipes that requires what type of splenda. Cause there is the all baking splenda and there is the granular splenda. I used the granular splenda for the basic yellow cake recipe. I agree with squirrellycakes and everyone that responded to the post, the taste is horrible and dry and texture is beyond measure. I am going to try to experiement a little with this recipe cause I know of a lot of people that are diabetics and I feel bad that when I bake a cake, they are not allow to eat from it, plus I was suppose to give someone a diabetic cake yesterday, which was the basic yellow cake - splenda, which was a recipe posted on the lastest recipes. I believe that if a recipe has not been tried or if it does not come out successfully, then why post it, this is just my opinion. I would not give or post a recipe that was not successful in the baking, cause this is a waste of ingredients and time and it is misleading. I am pleased when I hear from people that my product not only looks good, but even taste good and if I failed, I like to know also, cause it helps me to know what and where I need to make improvements or changes. I really love this web site cause it is sort of a teaching and learning site. I thank everyone for putting this site together.

I believe it was the baking Splenda, it was whatever the book called for.
Applesauce has a two fold purpose, it helps in a recipe where there is a limited amount of oil or a fat product, limited eggs and sugar. Seems to make for the best kind of reduced anything, cake. The recipe I made had both Splenda and a small amount of sugar in it and also reduced eggs for the amount of batter.
I found that muffins were the least rubbery texture of the recipes I tried and of course jams and things like that worked well, as they do with most sweeeteners or differently processed sugars.
Glad folks are having some success, but I still won't be rushing out anytime soon, to try any cakes. Guess that experience left a bad taste in my mouth and it wasn't the Splenda. It makes me rather angry when something is advertised as being really wonderful and is absolute garbage. The Splenda and the cookbook were very expensive here and such a huge waste of money.
Heehee, I don't like it when I can't have my cake and eat it too!
Hugs Squirrelly Cakes