“Surprise-inside” cakes are all the rage right now, and they’re just as exciting to make as they are to eat! Although they may seem like a mystery, this simple tutorial from Deborah Stauch (DStauch) of the blog Once Upon a Pedestal proves that with the right tools, even beginner cakemakers can create polka dot perfection!

Read on to find out the secret behind this jaw-dropping polka dot surprise-inside cake. 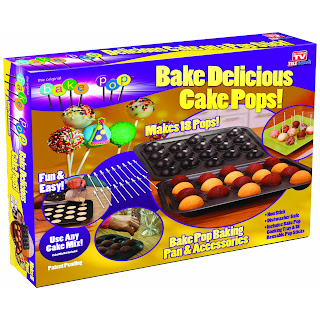 Perhaps you’ve seen these in the store lately and walked right by them. Like I did. Countless times. 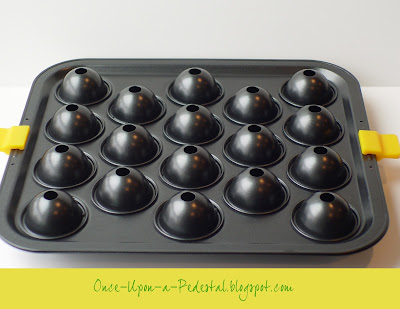 I kept asking myself, “Why in the world would I possibly need that when I can roll a perfectly round cake ball with my own two hands?”

And then one night I had this great idea for an experiment. How about using them to put polka dots inside a cake? Rather large polka dots. But polka dots all the same. 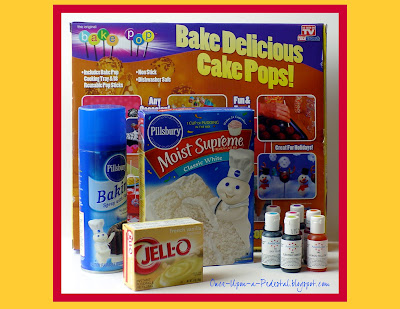 For the cake balls, I used the cake mix and pudding along with the substitution of milk for the water per the instruction guide. After dividing the batter in half, I further divided half of the batter evenly between 6 bowls for tinting. I used AmeriColor soft gel pastes for coloring the cake balls, and I used about 1/2 t. of each so that the colors would remain vivid after baking. I did not decrease the liquid as suggested or increase the eggs but went instead with the amounts on the cake mix box. 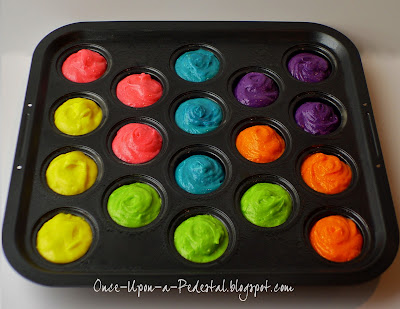 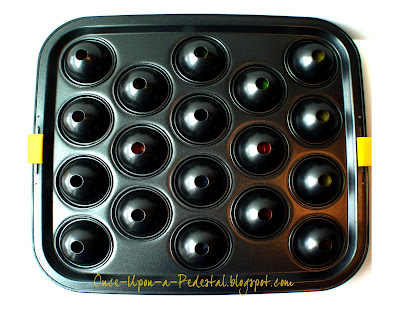 You can see the bright colors in the vents peeking through after the clamps were put on.

The instruction guide suggests baking at 350 °F for 25 to 30 minutes but that sounded WAY too long. My goal was to slightly under-bake them so that they wouldn’t dry out too much during the second bake time. They were done at 13 minutes in my oven. 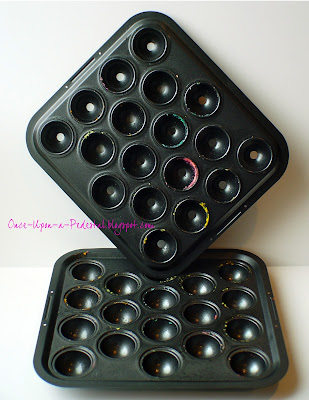 The pans are non-stick but do require a baking spray with flour to help the balls bake evenly. Clean up was fairly easy. 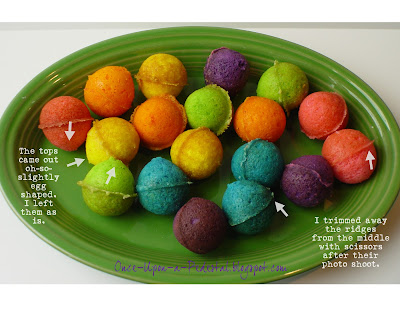 I also ended up trimming the tiniest bit off the tops to make them rounder. 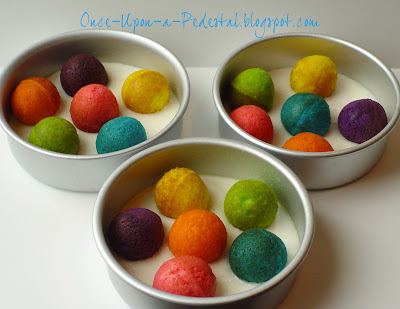 After adding just enough batter to cover the bottom of my prepared pans, the cake balls were placed inside. My original plan was to freeze the balls before this step but I skipped it so they were room temp when they went in the pans. 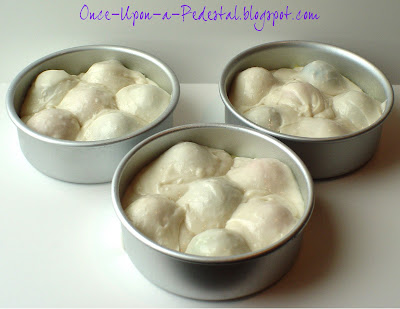 The remaining batter was scooped over each ball to cover. And into the oven they went. Looking rather more like dinner rolls than cake. I didn’t tap the pans or even the batter out for fear of uncovering the balls.

The filled 6-inch rounds baked about 30 to 35 minutes or until they pulled from the sides of the pan and sprang back when touched lightly. I didn’t use the toothpick method for fear of stabbing a colored ball (or hopefully soon-to-be-polka-dot) since the balls were already cooked and not a true gauge of doneness. 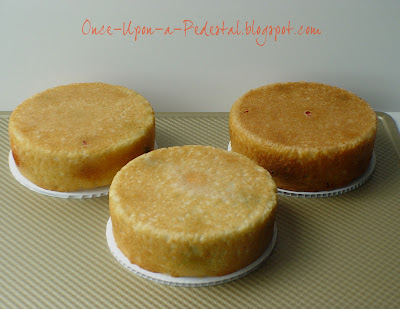 Off to the freezer to chill out and wait until the next day for a crumb coat and slathering of white frosting. 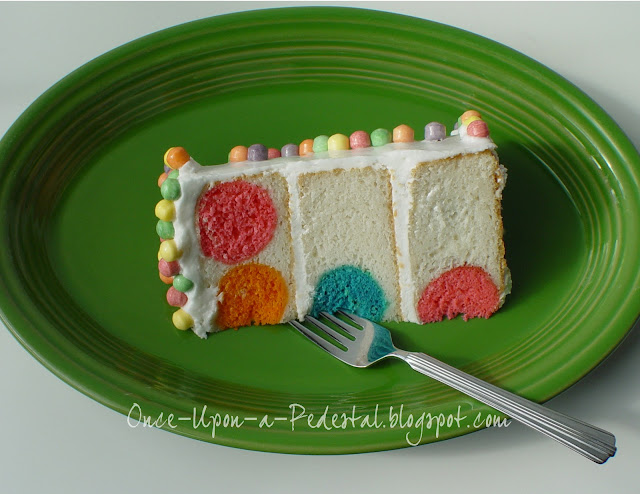 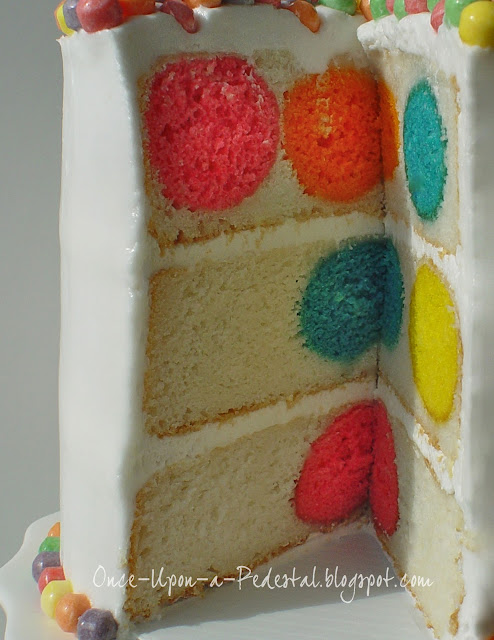 The first slice left this design. Not all dots showing but they’re in there somewhere. 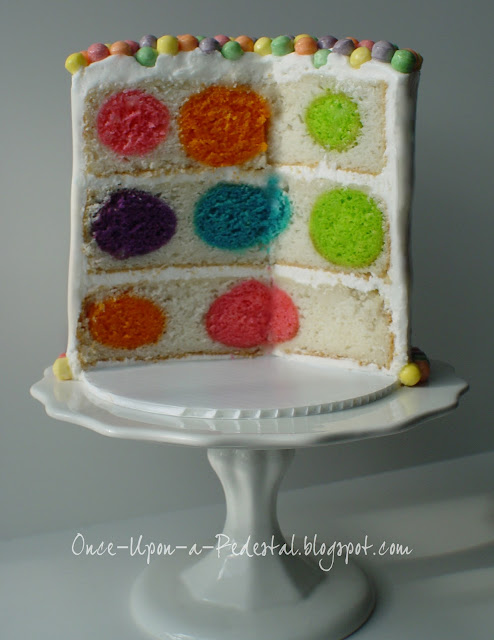 After cutting the second large piece, all but one color magically appeared. Perhaps placing one more ball in the pan would’ve produced a more even pattern. Next time. The colored balls stayed as moist as the rest of the cake even though they were completely baked before hand.

That is sooooo cool looking.

I would like to know what you use for a "crumb coat" . Cheers and Thanks, Deb D.

nice job thank you sooooo much

For the sake of those of us in the UK - what is instant vanilla pudding? I believe we can get the white cake mix, but don't know what the pudding is!

Instant pudding is a type of putting that you can just add milk to and whisk together, sets up on it own without having to be cooked. Jello Brand puts out what she used. When you add it to the cake mix your adding it in its powdered form which ends up giving the cake a nice texture and more stability if you want to carve. Keeps the cake moist also.

How is this possible?Such a great looking cake on the outside,becomes an even more interesting and beautiful cake once it's cut...Thank you for the tutorial.So generous of you to share your wonderful idea. Thank you again !

This recipe is must try on my list...I hope it comes out as good as this one.

Thank you so much for your tutorial, Love it. I always wanted to make polka-dot cake,just didn't know how. You're very generous for sharing.

You may know this product as an instant custard which comes in a box and all you need to do is add milk. Not many Americans know that the word "pudding" can mean something VERY different in the UK than it might mean here in the US. I was shocked several years ago to discover it was a fairly new concept in the UK of what you know as the "American Style Cake". You should hear American women, especially younger American women when I explain to them that it's not all that uncommon for a British bride to have a type of "fruitcake" or what we consider more of an "applesauce cake" as the wedding cake under the marzipan and fondant. Additionally, marzipan is rarely used in the US. For most Americans marzipan is an almond-flavored "dough-type" substance shaped and painted to resemble small piece of fruit. In fact, even fondant is a fairly new concept to many people still. Almost every formal cake ever made had a cloyingly, sickening sweet types of frosting, (see the Wilton recipes for decorating frosting as a good example) which I personally hated as a child and still don't care for very much. Since the creation of the boxed cake mix AND the frostings in the plastic cans created by Pillsbury, Duncan Hines, and Betty Crocker (3 top brands in the US) this is OFTEN what many families use for their standard ordinary "birthday" or celebration cake if they don't purchase one from a bakery of some sort. They're really an excellent product for a quick and easy cake. I hope these things have made it to the average supermarket store shelf. The cakes turn out a wee-bit "fluffier" than a cake made from scratch but still have an excellent flavor. Both have an important role in American baking. I often use a boxed mix as a starting point for a cake, just like the person giving you the recipe that used instant vanilla pudding.

That is so beautiful! Do you always put your cake in the freezer before icing? I've never done that before. How do you keep from getting a freezer taste?

This is awesome I love it.

The cake is so cute! What are the tiny balls on top of the cake and along the bottom? They match your batter so nicely.

Quick question: Wouldn't the cake balls become dry since you are basically cooking them twice?

This is so amazing. I am definitely going to try this. Thanks so much for sharing.

Putting the cake in the freezer before frosting does not give it a freezer taste since it's well wrapped.

The balls on the exterior are Chewy Skittles.

The cake balls are never dry unless you overcook them to begin with. Even then, the moistness from the batter during the second bake not only protects them, it actually somewhat "steams" them a bit. Never a dry bite!

Thanks for giving the tutorial a try!

Adorable and thank you!

I am just wondering one thing, you said you divide one cake into half and then color half of the batter in 6 colors. Did you use 1 and 1/2 boxes on the all white cake part?

Thank you so much! I can't wait to try this, just waiting on your reply. It sounds like you meant one box for the cake balls and one for the white batter, not sure though.... Since you said the eggs whites go into the white cake part.. Thank you!

Beautiful... i love this idea. thanks for sharing