Ok, I followed the recipe step by step, even found 2 other recipes and tried them....complete disaster....the gelatin had no scum on top, it wasn't firm, and wouldn't stick to balloons....any suggestions???

Did you warm up the gelatin mixture? Pretty warm. Microwave oven is good. I have notes from a bubbles class given by Tami Utley of Yummy Arts and if I can find them, I'll send you the recipe and info. We made great bubbles.

Ginnycakes, May I have the instructions also, Please, I also have a problem with them, Thank you so much.

I would greatly appreciate it....I want to make some special cupcakes for Christmas, and the bubbles were incorporated into the design. Thank you again for the help

I had the same trouble. I followed her tutorial, but it didn't turn out. It mostly stuck to the balloon, but there were bare spots on the balloon.Then I think I waited too long to do the 2nd coat and the gelatin had set too much.It was quite gloopy and blobbed in spots.There certainly wasn't even coverage... But I blew the balloon up bigger, as I'm trying to do a snow globe. I used 4 tblsps of gelatin to 8 tblsps of water.

Any tips from anyone??? TIA!

Thank you cakesrock, I have tried to open this pdf file to no availe. I appreciate it though. I will try the amount you used. Thank you

Well, I think I got a semi-success after the 6th (?) or so time I tried this! Here's what I learned: I believe I was heating the gelatin too hot because it didn't appear the right consistency or clear enough. 10-12 secs was enough. But it's a fine balance, because if you don't heat it enough or let it cool too much, it's too goopy. Also, you have to put a thin coat of shortening on the balloon, then wipe it lightly with a paper towel.I had too much the first few times, but I thought it wasn't sticking and the reason was I didn't have enough. In fact, as I said, I think I had too much. I also tried Pam, but think I had too much of that too. You may have bare spots on the balloon after the first dip - not to worry. They will be covered in the next coat. Spin the balloon around quite quickly, then hold it upright and let it drip, as the tutorial indicates. Because I was using a bigger balloon, I had some challenges keeping it upright once I had a few coats on. Good luck!

Thank you....I will keep trying. I used spray, I will have to try shortening. Hopefully I will be able to get it right...thanks again!!!

I have a question, going to attempt to make a snow globe using the gelatin and a balloon, will the gelatin dry clear since i'm not adding any color or dust to it??

It will be yellowish I would like to know how to make it clear as well. Also do you guys like to add luster dust to the mixture or paint with it after?

Mine wasn't too yellowish (I don't think anyway.) I have attached the photo of the cake. I was disappointed in all the bumps in the snowglobe, but just honestly was just happy one finally held together. And I had more adventures in gelatin - the bow on top is gelatin too (my first) and I was very pleased with how that turned out. I used sparkling sugar for snow attached to the globe, BC for snow inside and used Knox brand gelatin for the globe. 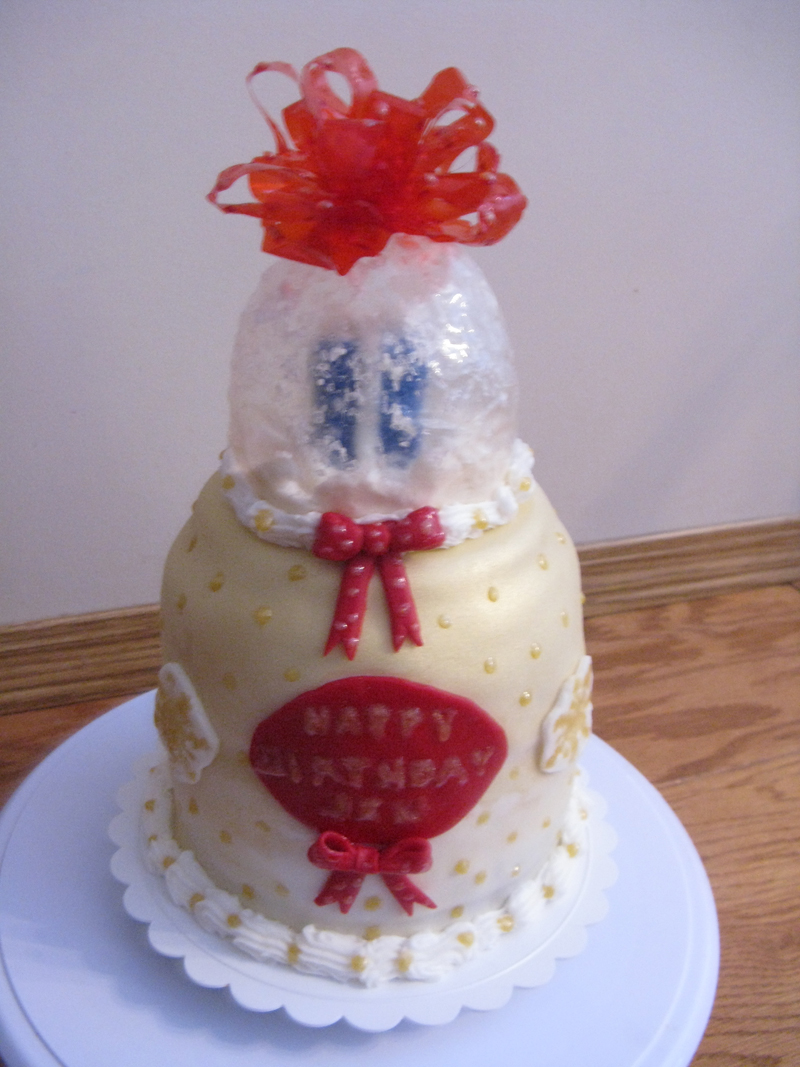 Mine wasn't too yellowish (I don't think anyway.) I have attached the photo of the cake. I was disappointed in all the bumps in the snowglobe, but just honestly was just happy one finally held together. And I had more adventures in gelatin - the bow on top is gelatin too (my first) and I was very pleased with how that turned out. I used sparkling sugar for snow attached to the globe, BC for snow inside and used Knox brand gelatin for the globe.

I think it came out awesome! I'm going to try using a ball pan first and then I'll do the balloon trick.

thanks for the tutorial pdf! will have to try these soon!

You can remove the yellow tone by adding a very small amount of violet coloring to the warmed gelatin mixture and it becomes clear. Just use it sparingly

It took me 4 tries to get this right (at about 100 balloons per try - did wonders for my lungs!), but it finally came out. One key thing that made it work for me was, like cakerock said, to use only the thinnest coat of shortening on the balloons. I also ended up sticking a toothpick pretty tightly into the mouth of each balloon and fastening it with duct tape. I then stuck the toothpicks in styrofoam. That way, they stood upright while they were drying and the excess dripped down toward the opening of the balloon, where it would be out of sight if it dried lumpy. It also helped keep them away from each other during the drying process, because when I did it any other way it seemed like they were magnets attracting each other, and whenever two of them stuck together, it messed up the surface. But patience paid off. Here's a link to my cake:
http://cakecentral.com/gallery/2183762/
I put some pearl dust and some gold and champagne luster dust in the gelatin before I made the bubbles. I used the 2 parts water to 1 part gelatin recipe and it was just right. I let the gelatin get very hot, because you have to make sure it melts. Then I let it cool to a temperature that I didn't think would burst the balloons. If the gelatin starts getting gloppy, you can reheat it in the microwave, although after about 3 or 4 re-heats, you have to make up some new gelatin mixture because it gets where it won't turn liquid anymore.
By the way, thanks very much for the tip on getting rid of the yellow color, sillywabbitz.

when you say violet coloring do you mean the dye we use for frosting or luster dust?

Made a globe last night. First one went into te garbage way too much gelatin and it was not hot enough. Take two seems to be drying well but looks a little deformed. I'm assuming the balloon got a little funny during the drying or I used too much gelatin. I will make one more just in case. Keep you posted!

Ok thank god I'm not the only one I have tried and tried
Who knew the gelatin would be so hard to work with
Heated no scum , gelatin wouldn't stick to the balloon couldn't get the mix right ggggrrr why is this so hard I have read all the comments have gotten little tips. I will try again fingerscrossed lol