Post Your Worst Cake!! (Cpntinued Since After The Crash)

I came home tire and with a headache, I have been laughing so hard my HD, keeps asking me if I am ok.

I think the Russian is #1, but that Barney, reminded me of the movie Alien! LOL

And kansaswolf....all I can say is, well, dang to have two cakes rank so highly in this group...kudos to you....I think...

I blame it on my sister (and other sister and one brother who helped)...

No really, we laughed SO HARD making that "party" cake, that it was definitely worth it... At least we KNEW it was bad at the time, and I can DEFINITELY say I've improved since then! Hee hee hee...

I'll have to send my sis the link to this thread, she'll want to know that her Russian cake has done so well!

O.K. I don't have a picture of this one but a few years ago I was hosting a playgroup around St. Patrick's day. So I had the bright idea I would make geen velvet cake instead of red. Everyone and the kids ate it and left after about 2 hrs. I went to change DD's diaper and let's just say it was a pretty horrible suprise. I had to call all of the mothers to warn them and let them know they didn't have to rush their kids to the ER for some freak intestinal problem. Thanks for all of the great laughs. We have to find that one of the Canadian, "happy Birthday EH." I laugh everytime I think about it!

I think the pile of cow poop deserves a ranking.

Kind of looks like a cow pile cake lol.

Oh so you mean to tell me is not cow pile?

Ok for me it goes
#1 Russian with the gold!
#2 Cowpile with the silver
#3 Kansaswolf stacked cake with the bronze
:lol

Here's the cake I did for my husbands birthday last year. It tasted great but it wasn't very pretty to look at.

It looked great before we left for dinner. But after we returned with the family, we found this. We all had a good laugh.

it look like someone smash the hell out of it!
OMG!
Edna

ok so now we have cow pile and massive cow pile explosion the runs...wow this is going to be hard.

I made this at my mil's house, sept in PA and she refused to turn on the ac. So I used canned icing and it just sarting melting. Poor, Poor Thomas!

My DS said "What dat"? And I said, "It's Thomas buddy"....so my little angel replies " No it not"! So, from then on I always ask my boys what the cake looks like to them, they are not going to lie for sure! 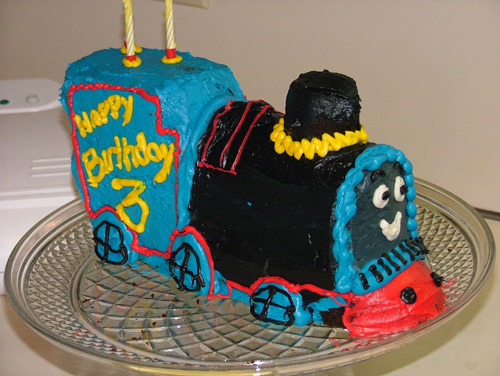 This past monday I had a cake disaster which was my worst by far. I was so upset that I didnt even want to take a picture of it. Mine kinda of had the same effect as Mickeebabe's cake where it looked great when I put it in the fridge and it just began tearing from the middle. But it tasted great and we still ate the whole thing. LMAO!

Chewbacca! What a Wookie!

Man these are funny! Kansas, "The Russian" and the "Hang Over" are just the best!

I don't have a pic of my worst "Worst Cake", but I've put out an APB to family members in hopes of sharing it with you all, but I'll give a description for now. It was my first, and the one that gave me the cake decorating bug; It was for my Grandparents 50th Anniversary, and being a Cakemuggle, I thought "how hard can it be"?

It was two tiered chocolate cake (canned choclate frosting), with the white columns, the gold "50" topper from Wilton, and the gold roses, leaves, and wedding rings you find in the wedding section of Hobby Lobby. I knew nothing about piping, leveling or doweling.

It was as smooth as a wrinked laundry, the "shell" border was, well, nothing resembling shells. The rings linked in pairs, spaced along the sides of the cake, gold leaves and flowers here and there, and the weight of the top tier naturally smooshed into the bottom tier, so it had a wicked lean to it. It was bad.

My next two worst are here below. The first is my attempt at a firetruck cake for my DS's 2nd b-day. It was June in El Paso which = 103 degree heat, so the Jolly Ranchers I used for the lights were literally melting. The RI accents were just crappy and breaking, and I had added so much Red (like 3-5 jars of the Wilton stuff) that the fondant was ripping like crazy. The best part? The (melting) chocolate donut mini's I just stuck on wooden dowels for wheels.

The second was for oldest DD's 2nd b-day (noticing a trend here). One of my problems is having enough time to get everything done, and I just plain ran out of time here. To be fair, DD #2 was 3 months old at the time. I didn't make the fondant bows like I wanted, let my dad and sister paint the "presents" cause I needed to shower, and realized at the last minute I hadn't prepared the cake board I just just rolled out a blob of what pink fonant I had left, and took a paint brush and quickly wrote the message on it. 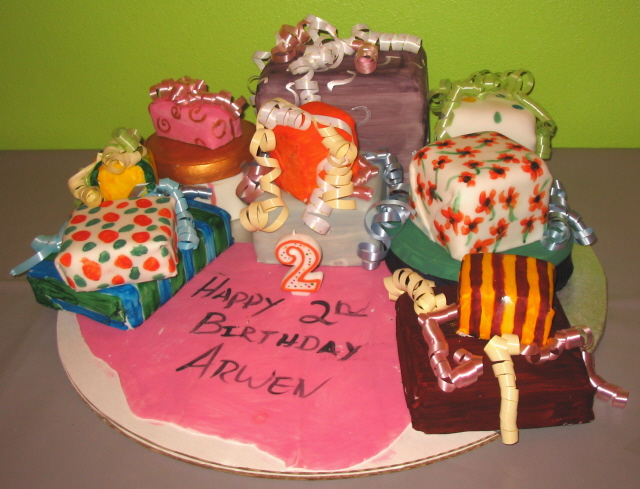 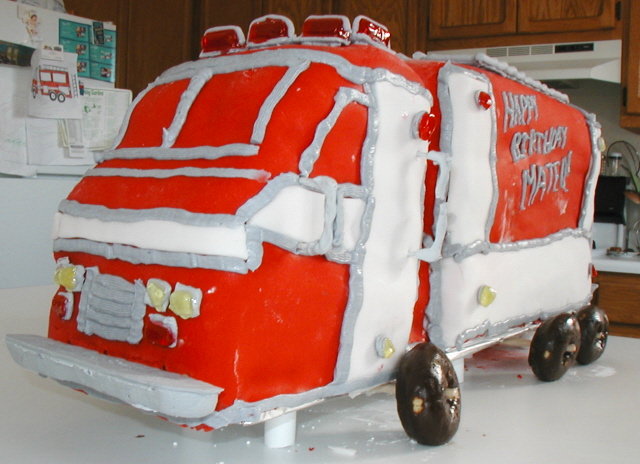 Okay, the donut tires got a good giggle out of me... I really like the use of Jolly ranchers for the lights, though, that actually looks cooler than it sounds!

But man, those tires would have to be COOKIN' to be going over 20 mph on a scale truck...

We probably have a new winner with this one.

OK I guess I can post my worst cake on here now. I tried the car cake and it was the first time I did it. I haven't used it since, I couldn't get it to look right to save my life. don't laugh too hard at it. I won't even show this one to anybody else.

OK - Who's ready for a good laugh. I had to post two, these were two of my first cakes 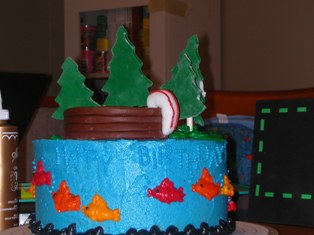 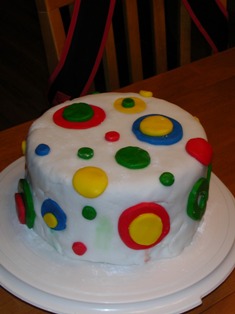 The Russian Guy Cake and Barney are in for a tie. My cakes are all bad so who am I to judge right. But the Barney cake made me laugh and spit out at my computer. had to clean it before I could type. That was funny. i needed the laugh. Thanks!!!

here is my first fondant cake with australian crimping. I hate it. LOL
it looked so bad, the teacher gave me some of her flowers to dress it up.LMAO 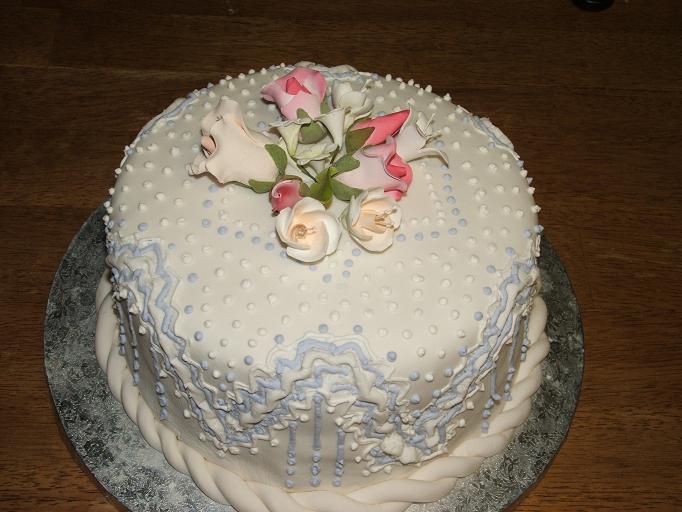 I never seen so many deflated tires on a firetruck..

I love the truck though, is cute and the Jolly Ranchers, neat idea!

Now..Thomas..poor thing...he looks like he is been on a train wreck..

Russian still at the lead..

This was before I took class 1 and 2. At least my nephew said it tasted good. 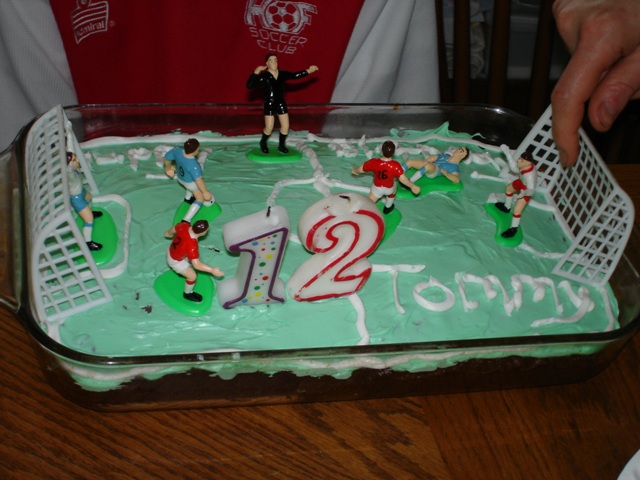 This was one of my first cakes-
it was messy, the roses were awful.... 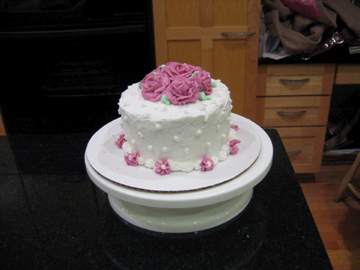 I love the firetruck, but the Russian takes it for me! Although Psycho Barney is a close second!

As for the soccer cake in the pyrex dish, it's not bad, we all had to start somewhere!

after giggling through some of these, I wanted to share two cakes... one from my collection, and the other was one that my two best friends made for me. I think they did a good job, being cakemuggles (lanibird, I'm so stealing that!), but I think it deserves recognition... 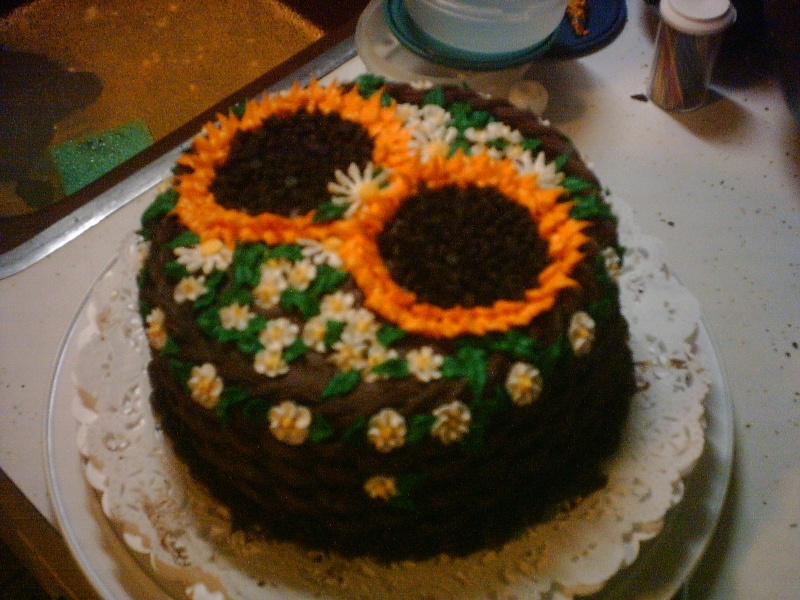 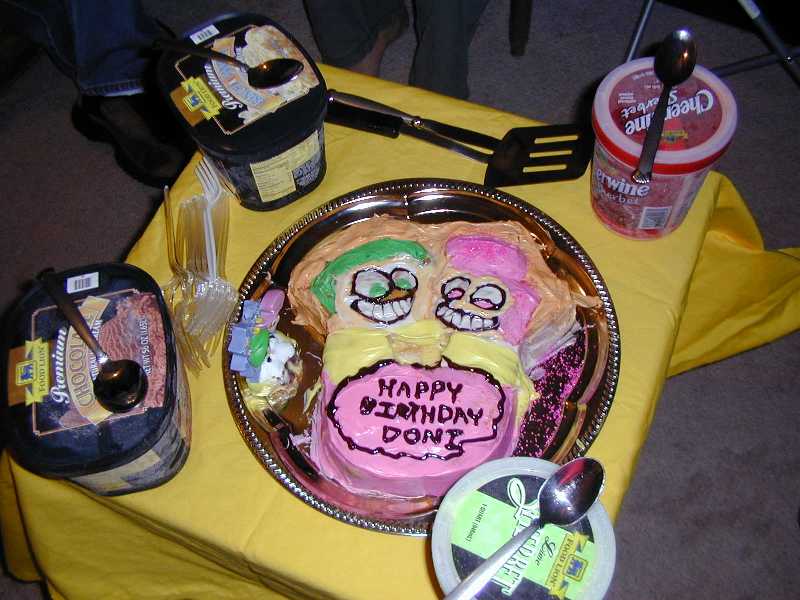 That is hillarious...and I totally agree...I can see Elton John in that cake!


Gotta go dig up my pics.

I cannot take credit for that one, it was sort of a group effort from this thread: http://forum.cakecentral.com/modules.php?name=Forums&file=viewtopic&t=581390&postdays=0&postorder=asc&&start=15

It is a great term though!

here is the ugliest cakes i ever made, that i took a picture of.. that is not to say i never made one uglier, but i was smart enough to not take a picture... but i took these... so you'll have to see for yourself.. 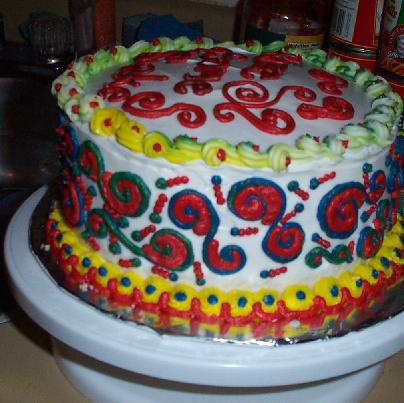 I think the cake crumbs in the icing add texture and I love the grass made from a star tip! 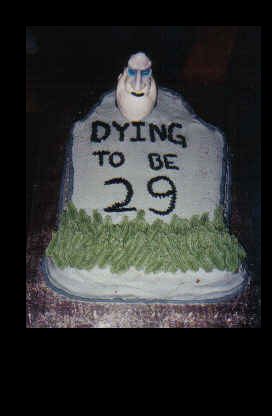 I didn't make this one, but my sis did. After I took my Wilton classes she was inspired to try her hand at decorating as well, and so she played around with trying to make a Jack-O-Lantern cake for mom's work.

Well, she was going for scary and got it, but not in the way she intended...

I think "The Russian" just found a friend...

OMG, that is hilarious! I think Lanibird is right, the Russian definitely has a friend!!

I think "The Russian" just found a friend...

I almost spill my tea all over with the elton John sunglasses remark!

I don't have one. Well I have made many ugly cakes I just did not take any pictures of them. KEEP ON BAKING