I am transporting a cake ( for my friends house) and not sure If it needs dowels.  It just an 8" round bottom ( fondant) and a 6" dummy cake on top. I wasn't planning to dowel since its styrofoam but wonder if it will move.  If so, would I actually dowel through styrofoam? I'm certainly not worried about the weight on bottom of cake. It's a double barrel cake on bottom, btw, so has a cardboard round in between. Making this cake. 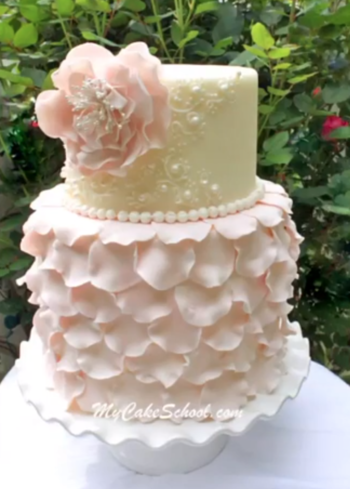 I would not dowel because of the movement, I would use royal icing or buttercream.  BUT, I would probably still put a small dowel or even straw in the bottom tier just in case the weight was a bit much. Beautiful cake :-) x

AI would "glue" it with buttercream.

One interesting about the cakes at our cake shop is that EVERY cake is pre-assembled prior to delivery.  We do a number of cakes a week so we would not be able to assemble on site, so we think about this type of problem all the time.  What I would suggest is either "gluing" with buttercream, as the previous poster suggested, or gluing with water itself.  Water and fondant make a very good glue.  In fact, I say better than buttercream.  Buttercream will never quite "fuse" the two together, but water on fondant will fuse the two together by the next day.  You would have to rip the fondant off before the tier came off the cake.