I am looking for a very good chocolate frosting that can be piped high for cupcakes and hold its place. It for an Oct. Wedding so I don't think I need to worry too much about heat. It going to travel over very hilly roads.

I have tried chocolate butter cream and that just isn't gonna work (flavor and look wise). I need a good pairing with devils food cake. Help?

Just a note: has to be peanut/nut free.

I also like the chocolate frosting on the hershey's cocoa powder can.  It holds it's shape really well. 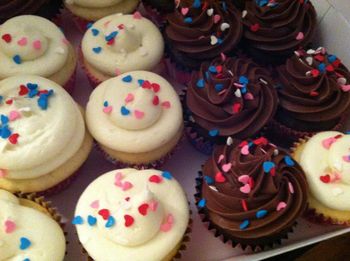 I used the Hershey's chocolate frosting recipe for these 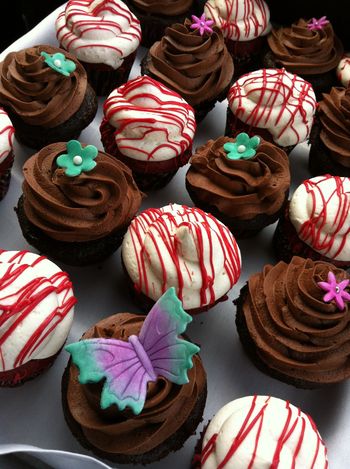 I used the Hershey's chocolate frosting recipe for these

Those look fabulous.  I love chocolate fudge frosting made from the Hersheys Cocoa Can.

That's the same recipe that I used to put some star tip squiggles on these fudge brownies. It's a crusting icing also.

Do you have to put chocolate food coloring to make it a dark brown color?  Every time I make chocolate frosting it is a light brown color.


Do you have to put chocolate food coloring to make it a dark brown color?  Every time I make chocolate frosting it is a light brown color.

Annie70, I've added both dark brown and black to intensify the color. Say for something like a camo cake where I want the color contrasts.  But adding a small amount of black will darken it up well.

hey for what it's worth -- i make this with softened butter, not melted --

Ano the powdered sugar is three cups -- just follow the recipe on the box of cocoa or google it :)

the Hershey's chocolate frosting gets darker over time.  It's light when you first make it, then gets darker.  You could also use dark cocoa powder.

Oh and I never melt my butter...I just make sure it's very soft.

With cocoa powder, I've even put boiling water on it, made a paste, let it cool, then added it to my regular buttercream recipe.


With cocoa powder, I've even put boiling water on it, made a paste, let it cool, then added it to my regular buttercream recipe.

Hm, that's an interesting idea. The buttercream one I made before had a problem with sort of.. separating. I saw today when I went back to that recipe other people had commented about the same problem. I have a different one from here I'm going to try.

I did Google, that's where I got the one I put up. I re-googled with "hershey's perfectly perfect chocolate icing" rather than "Hershey's Chocolate Frosting" and got the other result; the one you're talking about. Both from the Hershey's site. I'm going to give the Perfect one a shot, and a different Choc. butter cream and see how they fair against each other.

Sorry it took me so long to get around to replying here.

Excuse the crappy iPod photo. The left is the Hershey's Perfectly Perfect Chocolate Frosting, the other is a Chocolate buttercream which I can't remember the name of. It was found on allrecipes I believe. Anyway.

Both of them held their shape for 2 weeks (one of each just sat there uneatened, and thrown away. ;[) including in heat.

The Hershey's LOOKED the best, piped very nicely but I really didn't like the flavor. I could taste too much of the unsweetened cocoa. Not sure if I even wanna try it again with LESS cocoa. It didn't have that good strong yummy CHOCOLATE flavor. I don't know. My testers (mom,step-dad and fiance) all thought the Hershey's was the better of the two but it definitely wasn't great.

The other one didn't have much flavor at all. Probably too much heavy whipping cream, and it piped horribly (as you can see). Everyone was kinda "Eh" about it's flavor. I was the only one that liked this one better than Hershey's. 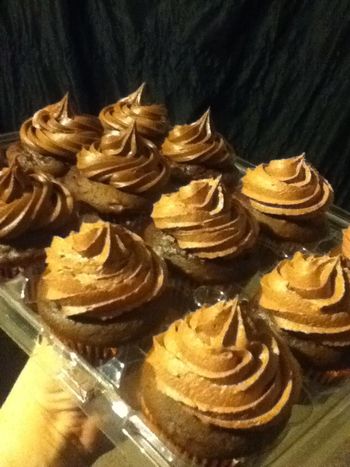 Soooo, I'm looking into some other recipes today to try and find a frosting I like. I have until the end of this month to get it right.. I've still not tried whipped Ganache. All the recipes I see tell you to get "Good Quality Chocolate" and I'm not judge of that. Yummy good chocolate to *Me* is a bar of Hersheys!

Just posting a follow up (not sure if anyone even read or care, but I do ;p).

I tried two more recipes for chocolate frosting. I feel like I'm getting closer to what I was going for, just not quite there.

The one's that are piped are the "Rich Dark Fudge Icing" and the three glazed one are the "Official" icing. 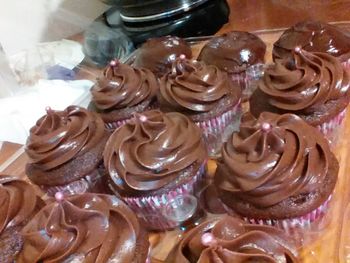 There were some problems with the "official icing", and that is why I only iced three. It came out really nasty flavor and super runny (even after upping the powdered sugar). I knew from reading and watching the tutorial that it would need to sit over night or at least a few hours to be worth using. However, the flavor was so bad I didn't bother. I just glazed a few so my testers could see why I gave up on it. It was not the fault of the recipe, it was definitely my fault for using chocolate with too high of a cacao percentage (60%). It was impossible to make it work for what I was trying to do. The one tester who loves dark/bitter chocolate ate two of the three!

The other frosting went over MUCH better in look and flavor. I only had to let it sit maybe 40-60mins for it to be ready to pipe. The taste that night to me wasn't right, I think I had ruined my taste buds with the other one. The next day it was a much better experience, but my testers (which expanded from 3 people to 5) all had the same reaction. "This is frosting or candy?" It was TOO thick for them.

If anyone is reading this: Any suggestions on how to lighten the frosting *without* losing the good chocolate flavor?

AWith what you have already tried, and did not like I would suggest your next option would be whipped ganache using milk chocolate, maybe with a touch of semi sweet. But before that, (do you have a vanilla buttercream recipe you like the texture of?) use one of the Woodland ones you already have made up and add it to your usual vanilla buttercream to taste. You've already encountered your testers tastes being different than yours. Since you stated it is for a wedding, you may need to put your tastes aside and have the bride decide if visually what you want to achieve trumps the taste factor of what you want.

I've used the following recipe with white chocolate and milk chocolate but you could certainly use a darker chocolate to get the color you want (milk chocolate makes it a beautiful light shade of brown but not dark). Maybe this could help? The original recipe said it was a soft frosting and said you could add more powdered sugar to get to your desired consistency, in the case of chocolate, you could add some cocoa. It pipes beautifully.

Cream the butter and sugar together until fluffy. Mix the vanilla in with the cream. With the mixer on low, pour cream into the butter/sugar mixture and mix until incorporated. Then add in the cooled melted chocolate. Once incorporated, increase speed to medium-high and beat for 3 minutes.

This makes 2 1/2 cups of frosting and I have doubled and tripled and it's always delicious.

Good luck to you!

I don't know if you are still looking to try another icing, but I use this exclusively and get rav reviews:

2 Lbs Powdered Sugar ( I only use pure cane)

Beat the butter on high until a very pale yellow

Add half of the powdered sugar, scrapping bowl

megsense Posted 29 Sep 2014 , 7:28pm
post #21 of 22
Okay.
I took the suggestion of using a butter cream I really like and just adding melted Chocolate. This went much better than the first chocolate buttercream I did (not shown, it was for a cake in July). I also did Whipped Ganache. 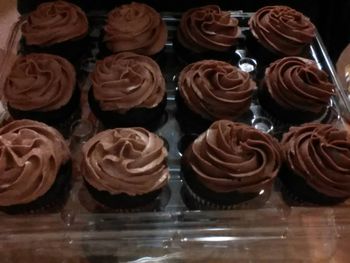 Left is Chocolate Butter Cream and the right is Whipped Ganache.

The Chocolate Butter cream was good, but I ran into a problem where the mix either got over whipped or I did *something* wrong. Had to add extra cream to get it smooth. It did not really crust like my usual butter cream, which is okay but it's a touch softer than I wanted. The testers liked it better than all the other attempts but not as much as they loved the Whipped Ganache.

To make the ganache I read a very fussy thread here about what is and isn't, and if whipped ganache even exists. It was strange but I got what I needed out of it. This is 1Cream(3oz) 2MilkChocolate (6oz) mix. And it didn't need to sit *too* long in the fridge before it was ready to be whipped. At first I over whipped it and it became unpipeable (horrible). I assume it was too much air, after doing some more reading I added a little HOT water and butter and went back to whipping and it came together. It's a MUCH milder in chocolate flavor than expected. It's almost like eating Dove chocolate.

I used 6oz ghirardelli milk chocolate ($2.75 per 4oz!!) and it only gave me enough to cover 7cupcakes. Now that the cupcake "order" is done being modifed (it changed 4 times). I need to make enough whipped ganache to cover 30 cupcakes. Sooo I may try Hershey's chocolate I can get 4oz for $1.20. I really don't know what else to do. But at least I've got a winner! lol.


I don't know if you are still looking to try another icing, but I use this exclusively and get rav reviews:

2 Lbs Powdered Sugar ( I only use pure cane)

Beat the butter on high until a very pale yellow

Add half of the powdered sugar, scrapping bowl

I am still going to try this on a Devil's Food "omg-your-done-with-the-wedding" present to myself. ;D