So to start off I wanted to do a christmas cake for the family. We had everyone coming so i wanted to make a nice cake to show off some of the things i have been learning. I had a full 3 page plan of what i was going to do/ make and designed this whole idea in my head. (first thing that changed was location. we are all meeting in vegas for the holiday instead of here.) I was going to pour sugar into a large puddle and use as a sesrving tray, howeer my copper pot was at home so i didnt want it to crystalize. No problem I will just pour white chocolate and use a serving tray of some sort. came out ok but couldnt eat the chocolate. In the spirit of the holiday I made a red velvet cake with a cream cheese-tinted green. Second thing i had to substitute was due to the loaction i was in making the cake there was no where to buy glycerine to make my fondant, before i have heard of mmf mind you. In a moment of desperation i thought no problem lets pour melted warm chocolate on top of the cold frosted cake. WRONG! don't try that one at home.... unless you know secrets I am unaware of. so im posting pics, one of the horrible first cake.... but the carrot turned out much better than the second one's did (oohh the second one i let my 14 year old sister be my soux chef ,so i wasn't as a perfectionist as i normally am) all in all i had a cake turned out ok, just no time for supports and by the end of the night the bottom layer was squashed! tasted wonderful both times though! (pictures came out backwards first pic was second cake) 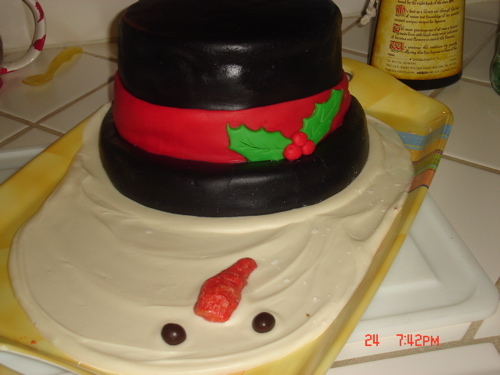 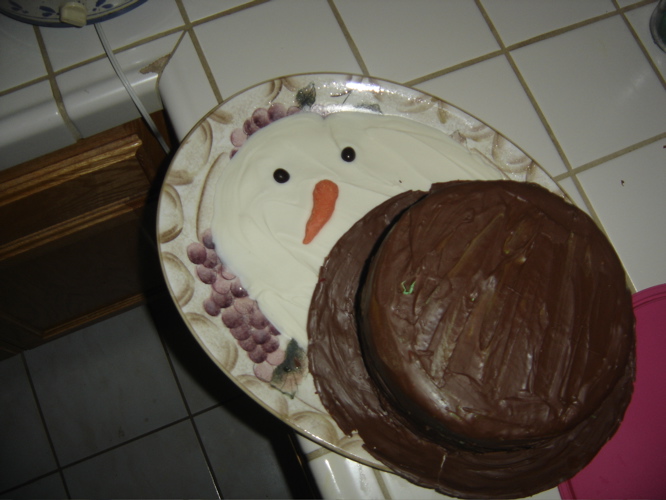 I think your second cake is great! What a cute idea!

Thats a great idea for a cake! Very very cute!!!

I'm guessing your second cake is the one that's higher up in your post? That one turned out really well!