How To Make The Lenses In Sunglasses And....

Ok guys....I have a Cake to make that is a very big deal and could be my big break so it has to be phenomal... The companys logo is a pair of eye glasses that are the big thick rimmed kind....the ones that are the current trend...and there are words behind the lenses so i need some help on how to make clear lenses....i was thinking about using sugar but wont i have bubbles? Also i am doing a tie made of fondant/gumpaste but i want it to look silk....any ideas? Please Please help me!! Thanks in advance!!

well what are you making the frame out of? there is technique in gingerbread hosue were you crush some hard candy and put it in where the window goes, pop it in the oven and it melts and looks like glass. you can also just melt the candy and pur into a scaffold type thing then attach to the window frame.. maybe something like that? as for silky.. that will be hard, id do something with luster dust.

Hi! I have posted this several times and I hope that it can help you.
For my ophthalmologist's cake in my photos, I made the lenses out of gelatin. this recipe can be tinted to make sunglasses. I made the frames out of gumpaste and the bows I attached with gum glue after they were completely dry. I just cut the gelatin to fit with a pair of scissors and attached them with a little water on the inside.
This recipe is thicker than that posted in the sticky for bows and flowers. It dries to a plastic-like form and makes excellent "glass" or dragonfly wings or windows.
I can't remember where I first got the recipe to credit the individual, but it is simple to make. You need to allow yourself several days in advance since it is thick and slow drying.

Combine and let sit, (bloom), for about 5 minutes. Dissolve completely over hot water, stirring very gently to avoid bubbles. Pour out onto a sheet of acetate* using a spatula to level, or tap it lightly on the counter. Let it sit, undisturbed, several days or until it starts to pull away from the surface. It will appear to be almost plastic and can be cut with scissors.

This is a stiffer recipe from that which makes the beautiful flowers and bows. In addition to the glasses lenses, I used it for my dragonfly wings as it accepts the food color marker well. For your sunglasses you should add the color in with the water. I hope this helps you. I find it fun to work with.

*Acetate is a clear plastic, available at craft stores or artist supply stores. I tried using glass once, thinking it was smooth, but it didn't release well at all.

I USED 2-LITER BOTTLE FOR MY '57 CHEVY'S WINDSHEILD, SO MAYBE THATS AN IDEA, ALSO IF YOU NEED THE TINTED, YOU COULD USE THE COLORED BOTTLES. THIS WORKED WEEL FOR MY CAR, CHECK OUT THE PICS GOOD LUCK

Hello! I suggest you use the gelatin sheets, they dry clear (if you want them tinted you can tint them) and are so easy to cut with scissors. Sugar would work well also, if you do decide to go that route i suggest pouring the hot sugar over the bottom of a bowl(if you want the shape of actual lenses) then when it dries dip the sides in water so it dissolves until you get the shape you need. I hope this helps......

Almost forgot.. As for your silky look. Luster dust would work wonderfuly or if you don't have any pearl dust from hobby lobby/michaels works just as well.

Can you add flavorings to the gelatin?

I'm thinking about using gelatin for my ice cubes, if I can't get sugar to work.

I've wondered this too. Posting so I can keep for reference

Wow, you guys really have me thinking... First of all, re the recipe I gave for sheet gelatin, I've only poured it out to make small flat sheets which I then cut out for whatever use. The wings for my bee cake, however, I needed larger so used purchased sheet gelatin, joined together with a little water to make a larger piece. Then I cut out the wings with scissors. The drawbacks to the commercial were: too wobbly, and I didn't appreciate the diamond pattern they come with.
Now, as to the flavoring and possibility of an "ice cube" effect... That gave me some thought. When my boys were little I used to make a gelatin snack they loved. They were called "Knox Blox" and could be cut into cubes that required no refrigeration. I made them in several flavors and here is a typical recipe:

In med. bowl, mix gelatin and juice. Add boiling water and stir until gelatin is dissolved. Stir in sweetener and juice. Chill until firm, then cut into 1"cubes. After they're cut, they will retain their shape even in room temp. You can use any combination of flavors you desire.

The reason I give the recipe,(other than it's fun), is: If you made them only with plain water, could they just maybe serve as "ice cubes"? Obviously, I have never tried this but it might be something to consider. I hope this helps.

I might have to experiment. It's for my own birthday cake, so I have full designer rights

Oh, this is sounding fun. Let me know how it turns out. (Maybe since it is YOUR birthday, clear tequila?!)

Home from work now..... off to the kitchen to experiment!

Is gum paste available at Michaels?

Here's a thread that will answer every gelatin sheet question you will EVER have!

Yes, Wilton's gum paste is available at both Michael's and Wal mart. I prefer home made, however. There are several recipes available here on CC, and on-line, Scott Woolley's and Nick Lodge's being my favorites.

Thank you for the tip - I appreciate it.

I followed the directions on the back- psprinkle gelatin over cold water for about 1 minute, add in hot water, stir until all disolved.

Then I poured into plastic ice cube trays and put in the fridge.

Gave tray a warm bath in a shallow dish of hot water for a few seconds and VIOLA!! they released and jiggled on out!!

on my face! What a fun application with gelatin. I hope they hold up well for your cake. Although they don't require refrigeration, my boys never let them remain too long on the counter before they were all gone. (I didn't know the recipe was on the box any longer. I have been using bulk gelatin...) The Propel water sounds perfect. Be sure to post photos when your cake is finished.

It did disolve the sugar bottles, but only after about 4 hours. Everyone who came in had to touch the ice!! It was so funny. The kids ate the jello. 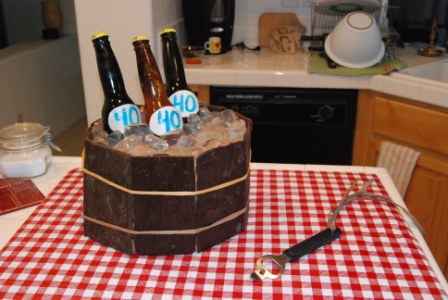 Hey, that cake turned out soo cool! Just make sure that you don't assemble it earlier than 4 hours, huh? What a terrific effect. I don't think I would have the courage to try sugar and isomalt is so expensive. I bet the kids had a ball eating the "cubes". Glad it worked for you and thanks for sharing the picture.

I just looked at your pictures and would have commented but you don't have comment access (or whatever it is called) enabled? Anyway, great.

Ooops, sorry. Apparently I wasn't signed in. My bad.

Hey, that cake turned out soo cool! Just make sure that you don't assemble it earlier than 4 hours, huh? What a terrific effect. I don't think I would have the courage to try sugar and is so expensive. I bet the kids had a ball eating the "cubes". Glad it worked for you and thanks for sharing the picture.

or have the kids eat the jello ice earlier and faster!!

Thanks for the compliments.

Sugar wasn't as hard as I thought. I did my first bottle with the knowledge that it would be crappy, and a throw away- just so I could play with it, and get the hang of it, and work out any kinks.

The next three were great!!

Give it a try

Am NOT going to read through this so I'm sure the experts have already helped, but I am putting a pair of sunglasses on a cake and I fully plan to use gelatin. As far as I've read you let it dry and just cut it out! sweet!