How Do I Sculpt A Pregnant Woman?

iv tried making one on my own she turned out ok but i was wondering how everyone else does them . can anyone help me out? i have a baby shower cake to make soon .

Do you mean a pregnant belly?

Bake your cake in an oven proof bowl the size that you need, and use smaller bowls or muffins for the breasts.

If that is what you mean and not a whole woman?

What are you making her out of? Cake or Fondant/Gumpaste.

This was given to me , cause I have been wanting to make one just no one I know is expecting so I haven't had a chance lol !!!

(apologies if it belongs to someone in here in CC. AGAIN it was emailed to me)


Belly Cake
We used two cake mixes to make our belly cake. The first mix was a simple sheet cake, 9" x 11". The second cake mix was split between a baked Alaska pan (the round tummy), and two miniature doll dress pans (there are four dresses in one pan).

We cut the bottom sheet cake to resemble a t-shirt, with a shallow neck and two triangular indentions to indicate the underarm area. We thinly iced this cake with a standard buttercream icing. Then we placed the half-round baked Alaska (filled with icing) on the lower edge of the t-shirt, and the two miniature doll dress cakes just above.

We then iced the entire thing, thinly, with buttercream icing and placed a raisin on the middle of the belly to indicate the bellybutton.


them get 3 different batches of fondant

The final steps were piping the blue flower on the shirt and stamping and painting .

Okay I never even read my previous post before I copy and paste the directions. They are kinda silly now that Im reading them because there are no measurements nor anything. I apologize .

And well specially the no visual. Maybe someone can be of better help

For mine, . I use 2 cake mix WASC recipe. The belly is a 9" round pan with a 9" stainless mixing bowl on top. (torte with buttercream). The boobs are approx 5" round ball shaped cereal bowls that go with my dinnerware and are oven safe. I would think the dress pan would be too pointy. There is a small pyrex mixing bowl that would also work. Divide your batter between these 4 pans.

Place on your cake board, ice with BC. Roll out your fondant larger so you can cut to shape. I use 2 pcs, covering the belly first, then the boobs, then I use a ribbon/bow to cover up where they meet. 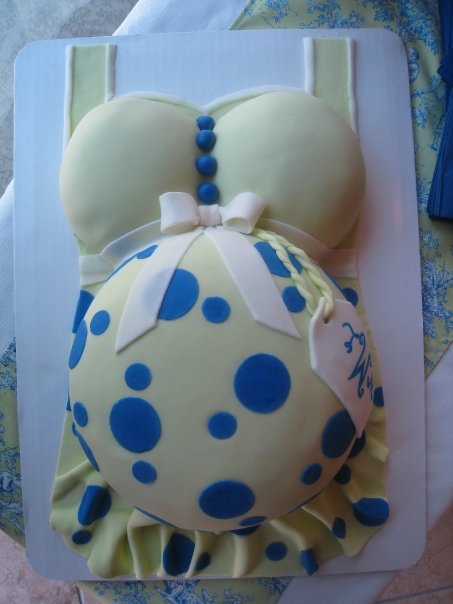 i think the OP wants the pregnant lady that sits ontop of a cake with her legs dangling over the edge.

in that case I dont know, sorry

I'm working on a pregnant woman right now, the kind that sits on the cake (Pink Cake Box).
It's much more difficult than I expected.
I've only made body parts before (for a pool cake), so this is new to me.
I gave it a few tries yesterday, then put my fondant away, will try again later today...

im sorry i should have been more clear . thank you all who responded to my post i want to figure out how to do it out of cake and out of fondant. but for the cake that i am needing it for is a pregnant lady sitting on top of a cake.

I have one in my pics that I did this week.
1. Roll a ball of fondant to make the belly. Squeeze the sides of the belly to make it not quite so wide.
2. Roll two smaller balls for the boobs, and sit them on top.
3. Roll a gumpaste/fondant mix into a ball for the head.
4. Roll 2 short pieces of flesh colored for the ankles. Squeeze and shape the bottom to make a foot. I covered my foot with pink so it looked like she had shoes on (just couldn't do the "barefoot and pregnant" thing lol)
5. Let all of this dry until hard.
6. Roll out a ball of fondant into a circle large enough to cover the whole body (belly and boobs). This will be her shirt or dress.
7. Roll out flesh colored into snakes for the arms. I pinch the ends to make her hands, then take a razor or exact-o to cut fingers. Attach them to the top of the boobs.
8. Using another piece of flesh color fondant/gumpaste, shape sholders and neck. Attaching them to the top of the boobs.

9. Roll out another circle of fondant to make the hair. Cut slices all the way around the circle, cutting some sections shorter to make bangs if you like.
10. I use a toothpick to secure the head to the body. I painted the lips on with gel color mixed with vodka.
11. I used chocolate fondant rolled into logs for the legs. I took a dowel and made a hole in the end to stick the ankles in.
12. Put the legs on the cake first, then the body on top.
HTH

thanks for the tip!

PERFECT THANKS SO MUCH FOR THAT TUTORIAL...SOUNDS EASY...I JUST GOT AN ORDER FOR THAT SAME CAKE FROM PINK CAKE BOX.COM...ILL POST THE RESULTS IN JULY! GOOD LUCK TO YOU ALL WHO ARE TRYING IT OUT!

rosralm...I posted some how-to pics of my pregnant figure on this thread: http://cakecentral.com/modules.php?name=Forums&file=viewtopic&t=675682&postdays=0&postorder=asc&&start=0