Hello, I am supposed to be doing a wedding cake for a client, and for the grooms cake he wants an x box 360.. this looks very challenging.. can someone tell me an easy way to do this or maybe has someone done it before tips/tricks?!?! maybe even step by step lol dont know where i would start!! she gave me this pic to show me what he wanted...


also.. what should i charge for this cake?!? thanks sooo much i really hope someone can help me out!! 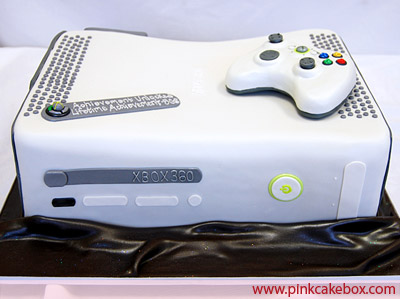 I just did the controller this weekend and it came out great. It was pretty easy, I found a stencil by googling xbox 360 stencil, enlarged it to the size I needed and used it as a template to carve the cake. The knobs I made out of gumpaste that I colored and shaped on toothpicks. I didn't do the bottom box (not sure what it is called) but that looks easy, it is just a square. Good luck, hth

I have one coming up in February and to me, it looked like 2 sheet cakes stacked and slightly carved to make rounded corners and a slight tapered middle.

I don't know if they want a controller yet, but you said to Google a 360 stencil. Is that a stencil for the system or controller?

The stencil is for the controller, the little thing on top with the colored buttoms (that is the controller, right?) here is the link
http://graffletopia.com/stencils/405

ohmigosh, that's awesome! Thanks so much!

It is real easy to do the console. It is just 3" high cake 12" long and 9" deep (actual console size) the top is slightly concaved and the edges curved to creat the rounded effect. The detail is added using fondant. I have made one in the past and have another to do in March. and the controler I also used the same template

THANKS SOO MUCH FOR THAT TEMPLATE! HOW MUCH DID U ChARGE FOR THE CAKE!?!? IDK WHAT TO CHARGE THE LADY!!!! HOW MUCH DID IT TAKE TO MAKE IT??

If you fortunate to live in a State that allows a home baker to sell cake(if you don't know then you should check into it and the risk if you still do so) then you should check your local area to see what the competition is charging for 3D sculpted cakes.
You don't have any pics loaded to gauge your skill level by. So, assuming you can shape the controller just right and smoothly cover your cake with fondant or BC to mimic the XBOX just right and you can nail the small details and labels and buttons then you should charge on the high end of your surrounding competition. It is a wise idea to figure out the cost of making cake and the base amount per serving that you want to charge and add extra for the specialty cakes like this. And assuming you are still able to sell cakes in your area- always advise the client of your prices upfront in the future. You price is your price for the hard work, skill and time involved in making custom cakes.

I am not sure about the pricing part but here that size would serve approx 50 so if that helps you deside on your own pricing.

I only did the controller, and it was for a friend so I only charged her $50. For a stranger, just for the controller, I would charge $100. The size I made would feed about 20 people. HTH

Check out my pics to see the one I did for my girlfriend's little brother! It was a freebie, but I probably woulve charged about $250 if it was for a customer. I havent seen many others that are standing up! To make it worse, I had to deliver it on a 10 mile bumpy dirt road!

i made one for my nephew he didn't want cake he wanted rkt so it made it easier to carve....i'm 2 years in to cake decorating and found the x box easy to carve and model...my controller came out a little big but i got an omg from my nephew so that was priceless....

Wow, this is giving me an idea! is my son's b-day this month and I didn't know what to come up with...he's an x-bos freak!! LOL

I made two x box 360 cakes, the first one was ok, it was for my son's birthday and the second one was for his friend's birthday which came out a lot better and it was rushed, actually they were both rushed, but I was happier with the second, like all others say just bake a sheet cake stack and carve, and you got a good template from pattycakesnj, I used my son's game as a template, it is not hard at all, you can also email pinkcakebox, seeing that is who made the one in your picture, and ask her questions I am sure she will be willing to answer, her's is awesome though. This is a picture of the second cake, the first I deleted from my photos. 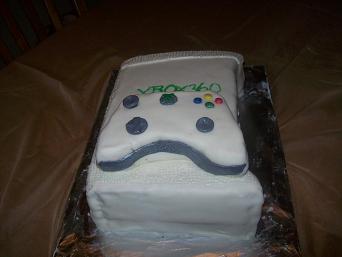 Here's one that I did. The pic doesn't really show up much detail, but this was a fast cake to do. The controller actually took longer than the cake.
i made the controller out of RKT and MMF.

http://www.cakecentral.com/modules.php?name=gallery&file=displayimage&pid=1531632d 2 (9 x 13) sheet cakes and then curved them.

Here's one that I did. The pic doesn't really show up much detail, but this was a fast cake to do. The controller actually took longer than the cake.
i made the controller out of RKT and MMF.

http://www.cakecentral.com/modules.php?name=gallery&file=displayimage&pid=1531632d 2 (9 x 13) sheet cakes and then curved them.

It was very well done Vicky I like it!!!

Thanks for the comment, but my kids are beginning to become my worst critics! They said after seeing the XBox cake, I need to take a break cuz it wasn't really my best. Gotta love them. So I gave the whole cake with my Army son to the base and they ate it all. Didn't complain about the 'decorations not being great'. Ha, ha.

I made an x box console without a controller, the x box was easy to do. I made a square cake and carved a curve to the front edge then covered in white fondant. I made the little holes on top with a coctail stick with a blunt end, and I made the little circle buttons with a cutter and then used cutters/piping tubes or whatever to emboss circles for the smaller buttons. This cake was for a guy who works in the gaming industry and they wanted a figure of his avatar sat on the top of the box lol.
I would think you could make a controller out of fondant pretty easily or does that have to be cake too? Even so, its probably an easy shape to carve out of cake if you wanted to, 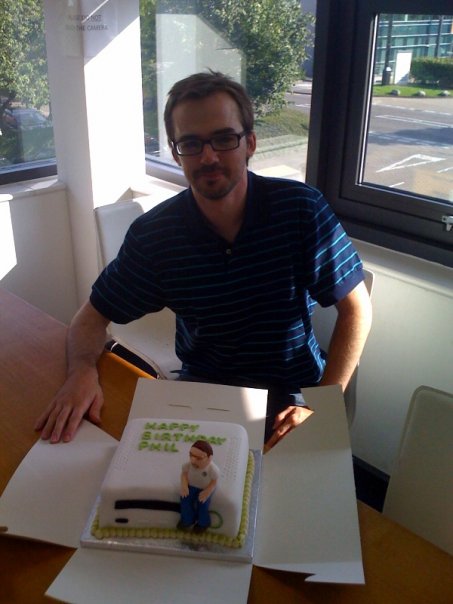