A friend wants a cherry chip cake for this weekend and said she use to buy the mix and the store and it was a vanilla cake. I went to 5 different stores and havent found it yet. i searched online but only found chocolate chery chip recipes. Does anyone have one made with vanilla cake?? I would greatly appreciate it if anyone would share. Thanks

Betty Crocker makes a "cherry chip" cake mix. I really don't like it but I have a friend who says it is her favorite cake. I'm in Canada and you can get it at Safeway for sure.

i had a boss who requested cherry chip when i brought in the office birthday cake. i'd never heard of it, either, and did the same thing you did, searching all over the internet and only finding "chocolate cherry chip." but he said it wasn't chocolate, it was vanila. so after quizzing him extensively on just what a cherry chip cake is, i ended up doing a plain white cake (WASC), and chopping up a bunch of maraschino cherries and adding them to the batter, along with some of the juice from the cherries in place of some of the liquid from the recipe. he said it was perfect and just like the ones he'd had as a kid (who knows, he may have just been being nice). i don't know if it was a true cherry chip cake or not but it was definitely good, if you like maraschino cherries. hope that helps some!

I love the Betty Croker one. I have found it at my local Kroger.

I needed actual cherry chips last year during my Christmas baking. I found Cherry Baking Chips at our Wal-Mart. They only have them during the holidays, but you can order them online. They come in regular size and mini.

Just google cherry baking chips and you will find online retailers that carry them. 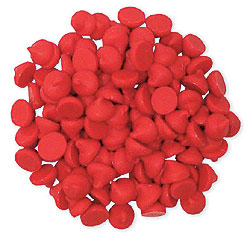 This is from the gourmet thread