Trying A Colette Cake And Some Decadent Flavors

Anyone else tried her Edwardian wedding cake?

I'm doing a 2-tier "inspired by" cake today using her Edwardian ivory-on-ivory cake for my final wedding cake class tonight. Took 2 hours just to do the decorating on the 6" last night!, but I'm really happy with it so far. Today I have the 10" to do, then find someone to eat them (I give them away to friends usually--we can't eat that much cake)....

I'm trying Toba's decorator's BC, and I should point out that it's Ok, but the high butter content is making it take longer to do the piping, because I have to keep popping the bag in the freezer and "freezing" my hands by grabbing a frozen chicken

to keep it firm enough to hold up. lol

I'll post pics later today when it's done. If the bottom turns out like the top, I'll be really happy. I've never tried anything this ornate before.

Have a great day everybody!

to keep it firm enough to hold up. lol

I have her wedding cake book and the Edwardian Cake is beautiful. Make sure you post a pic. I can't wait to see it

. I'm sure it's going to be gorgeous.

What an undertaking! I can't wait to see the results. I had to laugh when I pictured you with a frozen chicken on your hands!!

Can I ask how you made the coconut BC? I am suppose to do a tasting on Sunday and I was going to start experimenting on Saturday. (I'm at a math conference until then... so I am cutting it close!)

I can't wait to see this cake!!! I'm sure it will be wonderful!!

I made coconut filling by just adding coconut extract drop by drop to regular BC until it tasted "wow, that's coconut-y". I spread a layer of that over the chocolate cake after brushing the layer with a rum wash, and then just sprinkled and pressed a layer of flaked sweetened coconut right into the top of the filling and placed the next cake layer right on that. I can't wait to try it--the flavor combo when I tried a bite while building it was to-die-for.

The 10" is in the fridge chillin' now, then I start with the piping. Can't wait to put it all together and show you all. (No one else here at home gets as excited...

I really like how it turned out. Wish I was a better photog, but it was REALLY fun to do!

Now I have to transport it to the class and "learn" how to stack with plates, then drive it home and find someone to eat it. 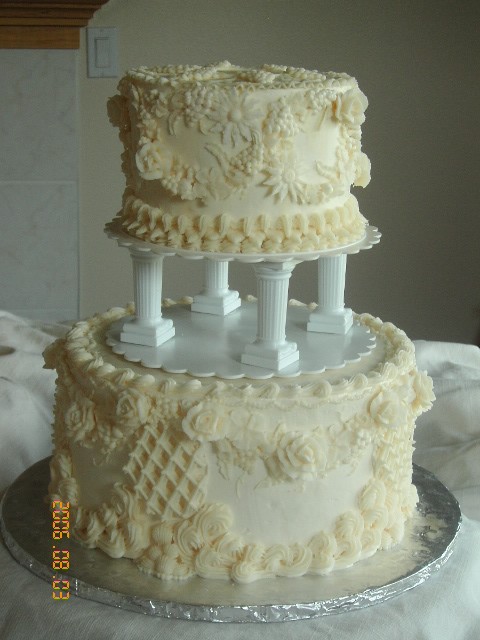 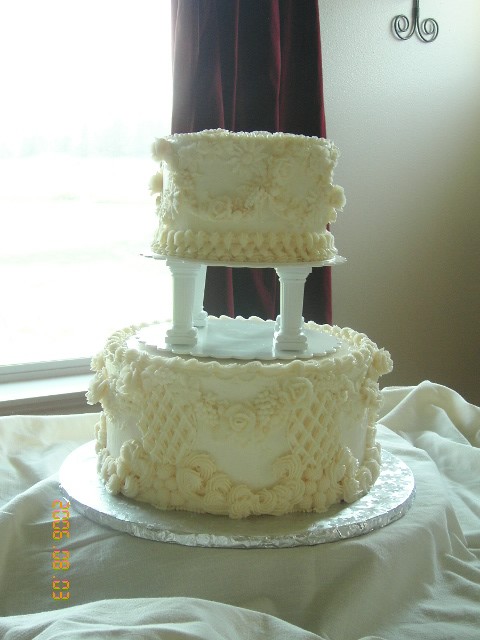 You did an amazing job!!! Did you pipe the daisies right onto the cake or did you made them on nails and transfer? Also, what kind of wedding cake class are you taking? It surely is not a Wilton course...

Your cake is amazing! Congratulations on a beautiful job.

Well thanks you guys. I needed that. I'm having a bummer afternoon since DH came home and told me that whenever I work on cakes "nothing else gets done"....which is just not true--EVERYthing else gets done, including running our business, house work, etc; I just squeeze cakes in here and there. He's my best friend and my biggest supporter, so that really sort of...took the wind out of my sails a bit. He's super cranky because he got like 2 hours of sleep last night and left here at 2:30 a.m., but it's very unlike him to act that way, so it was like

I piped all the roses, buds, 5-petal flowers and daisies on a nail on wax paper in plain old BC and let them crust for some days, then just peeled the wax paper off and placed them on a line of #18 piped swag so they'd stick. Dropped a lot and broke them too... The roses had to stay for the drive, so I stuck toothpicks in the cake sides with just about 1/4" sticking out, then stuck the rose bottom onto the pick to hold them.

It was just a 4-week class at a local cake supply store, but no one there has ever made a wedding cake cept me, so I just "had fun" more than really learned anything new...nice to get out, though, and a good excuse to make this cake.

Good thing I took the pic this afternoon--sure enough, someone accidentaly stuck their elbow in one edge of the bottom cake as it sat on the counter at the class...I can fix it, though, not too big a deal.

First of all let me just say your cake is exquisite and you should be so proud.

As for the dh, I am married to someone who is so supportive and encouraging just like you say yours is. I dont know about you but when I dont get any sleep, sometimes it amazes even me the things that sometimes slip out of my mouth.

I am sure he does not even realize how he made you feel at that point. I know what that feels like from both ends so even though you dont know me, I am sorry that happened and I think you should not let it take away from the joy of your accomplishment! The house can always get cleaned tomorrow and the world will go on!!!!

It turned out just beautiful!!!! One day I hope to be that good.

your cake is Awesome!!! absolutely breathtaking.

You have a cake to be proud of, very nice.

Beautiful cake. I would love to see it in person - that is so much better than a photograph.

Regarding DH - If you are living in a place like a lot of us where it is hot as all get out then he is not the only on that is cranky. Combine the heat with lack of sleep and I would be a wild, crazed psycho. I bet he will be back to his sweet old self before you know it.

That cake is gorgeous! Wow

I just have one question.....what is rum wash?

Wow, that is one beautiful cake. Well done.

Yep he was back to his adorable, wonderful, and handsome self today....

A wash is just a sugar syrup of half water/half sugar, heated on the stove to boiling, cooled, then add whatever flavor you like (I used rum flavor), and sprinkle or brush on the cake layers before filling. It moistens the cakes a bit and adds an extra layer of flavor. Wonderful!

Your take turned out just beautiful! I'm glad the DH was back to himself as well. I have one of those hubbies-he's so sweet and loving ALL the time, that when he says just one little negative thing, it totally throws off my day!!

I'm sure he feels better when he gets a little sugar into his system! (my trick is to make sure we ALWAYS have chocolate in the house in one form or another!!)

I'm glad you're feeling cheerier today, and your cake is GORGEOUS!! It gives newbies like me something to aspire to one day!

"Now I have to transport it to the class and "learn" how to stack with plates, then drive it home and find someone to eat it. :wink"