If Cake Weeps, I Weep!

Well, it was a very long weekend! My brother just graduated from the University os Arizona this past weekend and boy was it interesting making his cake.

I live in San Diego, so I had to bake the cakes then transport them to Tucson to my in-laws place such that I could assemble it. Everything was going good until after I frosted the base cake with Wilton's Whipped topping mix and thought I would save time for the next day if I wrote some of the writing on the sides of the cake. So that's what I did. Wrote out "Congrats, Andy!" on two sides of the cake and put in the fridge overnight. Well, next day comes around, come back from the ceremonies to finish assembling, pull out the cake from the cake container and see that the blue writing weeped down both sides of the cake

Man, I was mad that happened. So then I tried to cover it with more whipped topping mix and that didn't help because it kept weeping. I finally gave up and decided not to use either one of those sides as the main forefront.

Then while assembling the cap portion, I placed the cookie on top of the cap, but the cookie started to bend due to its weight, so then I had to scramble to find a board to put under the cookie. All said and done, it looked decent except for the weeping on the 2 sides, but while the cake was on display, my father-in-law took out a whole corner of the cake with his watch while trying to hand some grilled meats to my mother-in-law. Thank goodness my brother saw the cake before that happened and I had already taken pictures of it.

Man was I tired after putting this one together! It was my first time using Wilton's Whipped Topping mix. Did anyone else have problems with weeping with this stuff or was I just ignorant and didn't know that any colors placed on whipped toping will weep? Well, lesson learned and life will continue on. Thanks for letting me share my story. 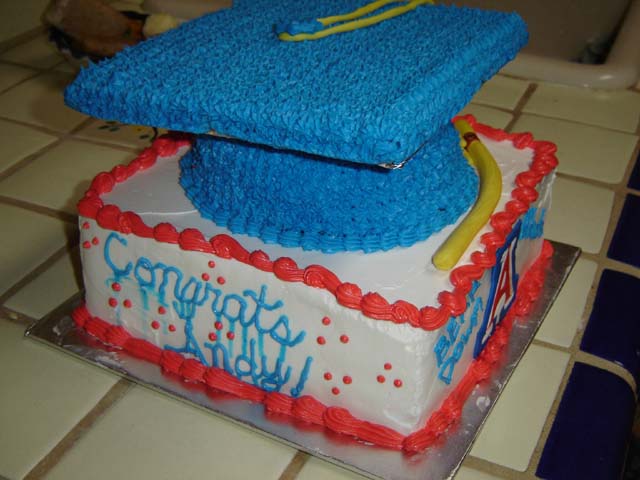 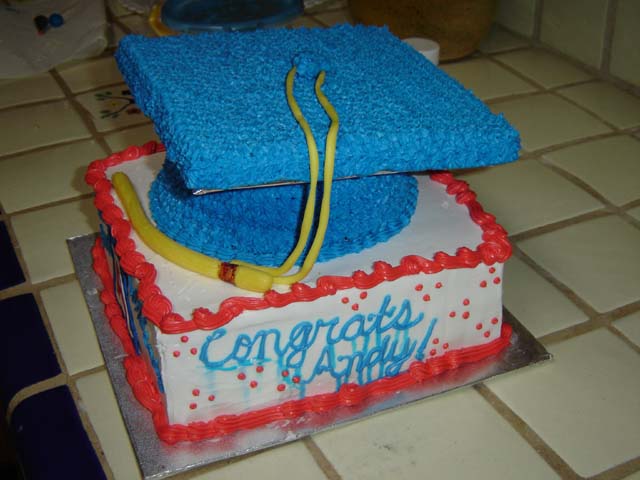 Nice cake! My guess would be it weeped because of the refrigeration. Maybe when it was coming to room temp, condensation built up making it run. I've never worked with it before though so I'm not sure.

I've had a few family member cake mishaps too. My Mom dropped an icecream scoop on her Mother's Day cake. My brother took out the corner of a cake once...trying to get food. I've learned to keep cake away from all the other food around my family. Everyone just gets way too excited--LOL!

Great cake. The very first cake I made weeped too when I took it out of the fridge, wish I knew how to avoid the situation.

Love the cake, it's very pretty.

I've dabbled with different mixtures of whipped frosting-mostly combinations of the Wilton mix, Cool Whip, "Bettercreme" purchased in gallon-size cartons from our grocery store's bakery &/or stabilized whipped cream (in the Wilton Yearbook). I've also decorated strictly on the non-dairy liquid mixtures when I worked at a local bakery. No matter what, I've always been told & found that the darker the color you're decorating with, the more likely it will be to bleed into the whipped frostings. My only success at controlling this somewhat has been to stick w/pastels or light colors, for writing particularly, or to forwarn customers that if they're intent on having the darker colors bleeding is more likely. Another option that I've worked with mostly for adults who don't like the sweetness of buttercream is to frost the sides (or wherever you won't be writing) in whipped cream & the top in butter cream (where I usually do my writing). This way, at least there's a compromise & I can cut down a bit on the buttercream & still keep too much bleeding from going on. I tried to attach a picture of a 1/2 sheet I did this way but I had trouble with the file size-I can try to send it directly if you'd like. The area within the top border & the border itself are buttercream-the border is closer to the middle than what I normally do since the sides are frosted by pulling toward the middle to create a smooth surface-I don't actually pipe whipped cream onto the top-it just gets pulled along toward the middle. The 2 different types of frosting don't completely meet, leaving a very small gap between them, which I then pipe the buttercream border over. The butter cream would be too heavy to pipe the border too close to the edge on top of the whipped cream & I'm not sure how well the buttercream would stay put on top of the whipped either. This often comes in handy for me so hope it can be helpful for you as well!

i use small parchent triangles that i cut out to use for my writing b ags and if i need to write on any form of whipped topping bag i stripe my bag half white buttercream and half whatever color buttercream... then when i write i write with the white color on the cake.. this way it wont bleed

The cake looks great anyway! I have never tried whipped icing and after hearing your story...I probably never will!!!