I posted about this cake in the HOW DO I forum before I started it...it was supposed to be a stand up panda. I thought he'd be more appropriate in the disaster forum. Oh well, guess I'll start over 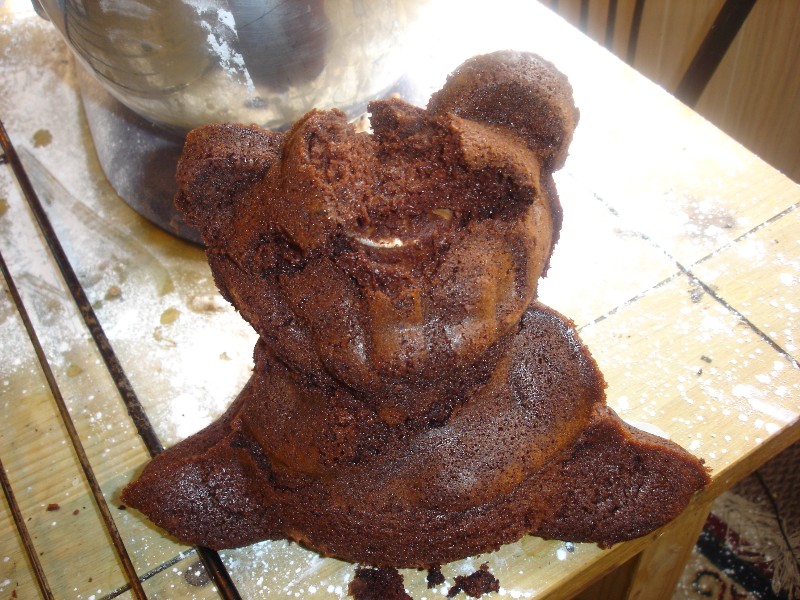 You might be able to stick the piece that broke off back onto the main cake with buttercream. Something like that happened to me before and that's what I did. You could never tell once it was all covered in BC.

I AGREE WITH CHRIS J. IT'S NOT A DISASTER...JUST STICK THE "HUNK" OF CAKE ON HIS HEAD. NOONE WILL EVER KNOW...AFTER YOU ARE DONE DECORATING IT!

amen, chrisj,
frosting covers over a multitude of messups. LOL

Oh yeah! And I've had a WHOLE BUNCH of those. LOL

OH NO!! I just looked over & saw this: Oh Teddy why did this happen to you?

Okay, now its out of my system :lol

Do you still think I can save him 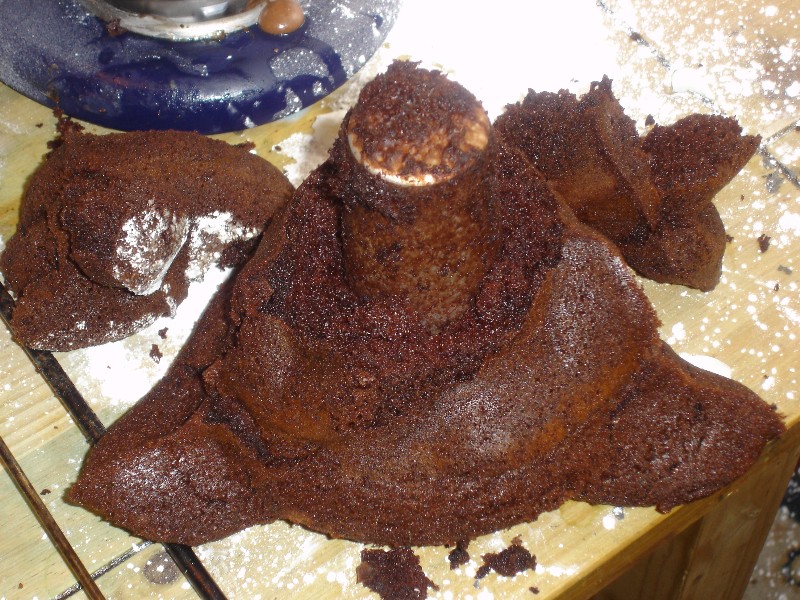 Poor guy...either way, it will be eaten!

Still looks yummy! He's just asking to be eaten up!

OH NO!! I just looked over & saw this: Oh Teddy why did this happen to you?

Okay, now its out of my system :lol

Do you still think I can save him

Do you have a poltergiest? lol

WHat the heck happened?

Is it because of the heating core? I swear I could never get that stand-up bear pan to work with the core and I finally had to just use it without it and had success. I think it's just me, though. Everyone else seems fine with it. My cakes kept breaking.

He was sitting untouched the whole time...as soon as I got the first picture uploaded & posted it I turned around & well you know the rest!!

dsoutherngirl: I'm not sure, but thats what it looks like at the moment. I might try it again without it.

How quickly did you take him out of the pan after you took him out of the oven? If he doesn't cool enough in the pan--he is going to keel over like that.

Also--when I make him I always take out the heating core before I remove him completely from the pan.

And--what type of batter did you use? Generally, a mix of a pound cake and a regular cake mix will do. When I do him chocolate, I use DH Chocolate Fudge and a package of choc fudge pudding and add in an extra egg. I believe it's the recipe for the DH Chocolate poundcake found on the side of the box.

Hopefully your next one will work better.

Lisa: I followed exact instructions on the bear box as far as cooling. I usually go by my own times, but I've never used him before so I thought I would follow directions.
I was going to take the heating core out, but he was broken in the middle, so I thought that would make it worse. I figured I could leave it in and patch up the holes...guess not

I should have used a pound cake/cake combo, but I was being lazy & didn't want to run to the store. I did the DH devils food, doctored it the way I usually do, but I added an extra egg.

I guess I will try again & see what happens...maybe I can even keep someone else from ending up in the disaster forum - gotta find the bright side I guess.

Here I was getting ready to try my first 3-d cake the rubber ducky....lol Im thinking I might need to wait.....lol I made cake balls last night they are yummy so you can call them teddy balls.. OK that sounded bad

lol anyway try them they are good... As to mr teddy I think he just wasn't ready to shine yet... Try it again Im sure it'll do great!.. LOL I'll pray for you if you pray for me and Mr. Ducky.... Quack Quack!

Don't worry about Mr. Ducky...I'm sending good thoughts your way. Teddy needs all the prayers he can get

) gave me for a recipe and it worked!!!!
http://www.wilton.com/forums/messageview.cfm?catid=7&threadid=57996&FTVAR_MSGDBTABLE=

. I didnt try this recipe at first because the amount of crisco was a bit off putting, but it worked and tasted great. I sent to cake to the zoo with my husband for them to eat, because i just made the cake to practice. They loved and said it was the best tasting cake i had sent so far (they've only had mix cakes so far...havent ventured into scratch yet...but am going to try one this weekend--fngers crossed). This batter is very thick, makes a generous amount..i had leftover and baked a 6 inch round. It may be worth a try...took me three trys to get it right

i was ready to throw out the bear pan, but my hubby was like nope you will get it...keep trying...he even helped me search for recipes on the net...

hope the next one turns out...

I nearly fell out of my chair when I saw..."Do you think he can still be saved?"...LOL

I'm glad you've got a good sense of humour about it, poor teddy really IS "A slice of god help me" !

princessjellybean: I'm thinking this one is going to be at least 3 tries

thank you for the link to the recipe, but as you can probably see I am baking impaired..I have never made a scratch cake that has come out. I've even tried some of the recipes raved about on here & I think its just me. I am however going to try the next one with the poundcake combo. Thank you for your encouraging words.

Jamessweetie: Sometimes you just have to laugh...looking at Teddy I couldn't do anything but!!

Well I can say with full honesty that this thread has made my entire day, I am still laughing!

And finally...the last of Teddy. This is what he became when I took out the heating core: 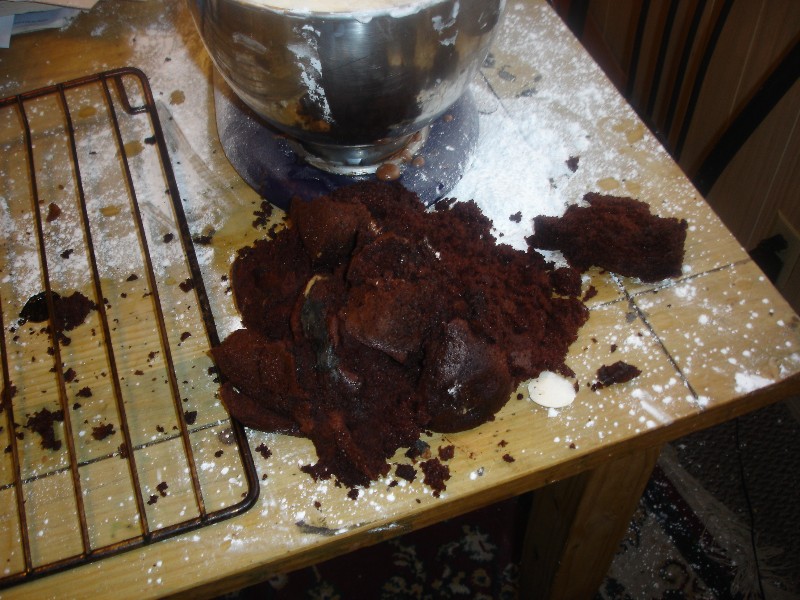 ge978, Thanks for the laugh! That darn teddy is probably the reason cake balls were invented to begin with. You will find several threads on teddy disasters, so know you are in good company!!

I feel so much better though that your counter looks exactly like mine after I bake a cake! My kitchen ends up looking like the baking aisle of the grocery store exploded!

Newtodecorating....I knew cake balls had to start somewhere...believe me I am having a good laugh right now also.

Jamessweetie: I was wondering how long it would take someone to comment on the mess in the background

I am a total pig when it comes to baking...powdered sugar is covering my whole table, floor, face, hair, child..you name it

dsoutherngirl...maybe I can post a tutorial on "teddy balls"...I'll have to pm Jackie

I've always used a butter recipe cake mix with no problems, but have never tried chocolate (and now probably never will).

Laugh it up and move on!