I got an email Sunday morning from the bride who's wedding cake I did on Saturday. In it, she's complaining that I didn't do her flavors right. Didn't ask for refund, nothing like that, just said she was very disappointed.but I gotta wonder.

So I got the contract out, looked at what she personally wrote in herself, and lo and behold, I did the cake exactly as specified to the tee.

I scanned a copy of it, attached it to my reply to her, and started scanning back thru every email between the two of us since the day she contacted me. I keep all correspondence saved. I see where I sent her a contract with her flavor choices, which she asked me to change, I sent her a revised contract with those changes, which she then said she wanted to change again. What she now wanted, was two different flavors in each tier. This is probably where I could have done things differently: I replied back to her "please write in your specific choices so it is in writing and I see it when I am working on the order". She returned the contract to me, with absolutely no mention of combining both flavors into each tier. So it is written, so it shall be, right?

After that, I never spoke to her again until a couple of weeks ago when she came to make final payment. Now, at that meeting, I had that contract out in front of both of us, I went thru every line of that thing, made new notes about wanting the tiers staggered, and how placement of the snowflakes was going to be arrangednot a word about the flavors. So it is written, so it shall be, right?

I explained to her I do not go back and scan thru emails for details of orders. I refer to the contract, which in this case, she personally filled out when it came to the flavors. I told her, I see that we did indeed discuss this in previous emails, but after the 2nd time you changed the flavors, I asked you to write in very specifically what you wanted so I would know what your wishes were. That wasnt done. I am very sorry, but this misunderstanding is not my doing.

So she replies back to me today, emphasizing the email conversations. I said, yes, Im not disputing the fact that we discussed it, but again, I asked you to put that in writing and you didnt. I honestly didnt remember talking about it until her e-mail yesterday

I offered to make her a new anniversary cake with the flavors she was expecting on her 1st anniversary.I am not willing to do anymore than that if she presses this matter.

What do you guys think?

Buyers remorse. Sorry but it's her own fault, she had different chances to tell you what flavors she wanted and never brought it up. I dont think you have any blame in this, I think she is trying to get you to 'offer' her a refund.

Oh, and when I delivered it, the mom, looks at it (very beautiful by the way), and says "shouldn't it have more snowflakes?" I looked at it, and said "It would look silly with more snowflakes." That may have inspired the bride to complain, cause I bet mommy said the cake decorator snapped at her....heh heh.

I agree. It sounds like mommy might have planted the seed of discontentment. Do you have pics of the cake? I love snowflakes!

Can you post a picture? I'd love to see this cake!!! And yes, I think buyer's remorse is the issue here...or, she's one of those who complains about everything. I mean honestly...who has time to send emails about cake the day after their wedding???

Hi Jamie, I don't sell cakes professionally, but I sold real estate for 12 years, and it's all about what is in the contract. If you had it in writing, then that is what is binding. The two of you went over it again right before you fulfilled the agreement and she did not make any changes to that part of the contract. Just because she mentioned making changes in a few emails does not alter the contract. It would have to be written in for it to be binding. She's "fishing" for a refund, could be partial or more; it's hard to say. You handled it correctly. She messed up. I think it was nice gesture on your part to offer another cake.

Here it is. It had little ice patches in areas (piping gel and irridescent rainbow flakes) that don't show up well in the pic. The mold that these were made from were specifically chosen by the bride as well. If there were different sizes of flakes in this mold set, I would have added more, but more of the size you see....would be overkill. I LOVE this cake. 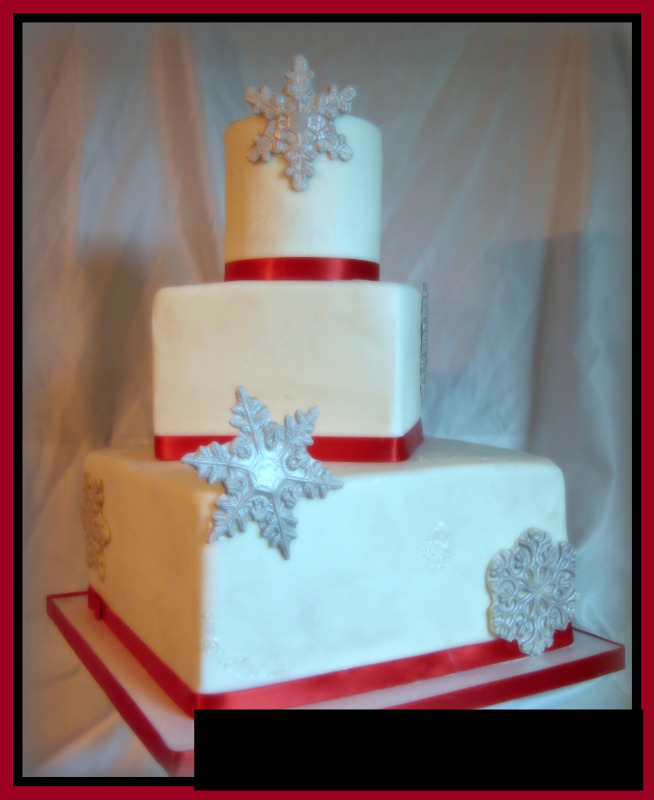 Wow, very pretty! I agree with the others, she's wanting you to offer her a refund. Not your fault though, you did everything right.

Those snowflakes are gorgeous!!! This is beautiful, don't feel bad about this at all. You did nothing wrong!

Oh, and when I delivered it, the mom, looks at it (very beautiful by the way), and says "shouldn't it have more snowflakes?" .

What alot of MOTBs forget is that it isn't *their* day or cake or flowers or dress - it is their daughters.
So hmmm, yes, i am thinking the MOTB has had some imput into the email regarding the cake.

Your have covered all bases - so rest assured that NO fault lies with you.

as to why on her first full day of marriage the brde would be contacting you anyway - shouldn't she be totally engrossed with her new DH?

maybe this is not one very happy bride - and your going to cop the flack over it.

Yeah, I know. It makes me wonder. What's really going on? Cause something tells me, it has nothing to do with the cake. Nuhhhh-thing.

What does she want? She hasn't asked for a refund?

Maybe she just wants validation that SHE'S right and YOU'RE wrong.

What does she want? She hasn't asked for a refund?

Maybe she just wants validation that SHE'S right and YOU'RE wrong.

Bwahahaha. Thanks Mensch, that cracked me right the hell up!

I'm wondering if the mom and bride had a payment arrangement and possibly, because mom didn't like the cake, mom does not want to offer to reimburse the bride for what she put out for the cake.

I'm wondering if the mom and bride had a payment arrangement and possibly, because mom didn't like the cake, mom does not want to offer to reimburse the bride for what she put out for the cake.

I don't doubt any possibilities, there are just too many crazy things people can think up nowadays.

Well, I must say...you did a beautiful job and this bride has no reason to bitch. Good luck with this PITA

What's this bride fishing for you ask? Some compensation probably.

What does she deserve? A smack in the head.

That's one gorgeous cake girl.....made specifically to her signed contract....she doesn't have a leg to stand on.


I don't get some of these couples nowadays. When I got married nobody saw or heard from us for at least 10 days after our wedding day......we had better things to do! hahaha

Of course we didn't live together before our wedding....that could be the difference.

People enjoy Bit***ing. I'm fully convinced most people are just happier when they B.

I don't get some of these couples nowadays. When I got married nobody saw or heard from us for at least 10 days after our wedding day......we had better things to do! hahaha

Of course we didn't live together before our wedding....that could be the difference.

Thanks D! I wonder too....really. You're really sitting down the morning after your wedding, after you should be all exhausted after a night of partying and romping in your new marital bed (ok that made me laugh just typing it)....but you're in front of your stupid computer drafting a lengthy complaint about the order of the cake flavors???

I think the reason brides take the time to complain the next day is to make their complaints more valid for when they ask for a refund. I guess they figure if they didn't hesitate with the complaining, it must mean they are really unhappy. But as we all know, 9 times out of 10, the brides that do this, so it cause they want a refund.

The cake is gorgeous!

Well she is the bride and the world does revolve around her, maybe you should offer to give her a total refund and make her a free anniversary cake for every year that she is married.
Everyone knows that the the tinest little detail wrong with the cake will RUIN the entire wedding.
Honsetly I'm surprised that she has'nt annulled the marriage yet with such a disaster of a cake, it will be a miracle if they stay married longer then 6 months...

...this is said with total sarcasm of course, she's a nut job and your cake is gorgeous and completed per her specifications in the signed contract. Case Closed.

Don't forget the free birthday cakes every year for all of their kids, plus free cakes for any relatives.....