So, I Guess You Can't Put Mmf Figurines In The Oven!

My son asked me to make a Lego Batman cake (as in the Lego Batman videogame) for his sixth birthday. He wanted a Lego Batman, Lego Robin, and several stacked Legos on top of a blue cake. I showed him the Lego cake by sweetpea8 from the gallery, and he said, "Yeah, kind of like that. But make them a little smaller, so they fit." This kid is specific.

I decided to try MMF, instead of rolled fondant - everyone keeps saying it's so much tastier. I used the T's MMF recipe from TsSweetcreations (Thanks, T - it was delicious!), and it was so much easier to make than traditional fondant, albeit a lot stickier to knead. Then I wrapped it all up and let it rest overnight. The next day, I added GumTex to part of it and started to model my little Lego men. They didn't seem to be holding their shape very well, so I added more GumTex and tried again. Feeling frustrated by their inability to hold an edge (Legos are so square!), I decided to try the old trick of putting them in the oven with the light on to dry out quicker.

A couple of hours later, I opened the oven to discover Lego men straight from the mind of Salvador Dali. Yeah - turns out that marshmallows melt when warmed. I have no idea why my brain forgot that little tidbit of information - it's pretty basic stuff!

I rushed out to the local bakery supply shop just before they closed and bought a pack of Wilton's rolled fondant. I whipped new figures together with that + lots of GumTex - stayed up until 2:30 in the morning working on it. I had a lot of fun, though, and am pretty pleased with how they turned out - they aren't too wobbly! The MMF worked okay for covering the rice crispy legos (although they do look a bit squashy) and the cake, and everyone said it tasted great. So does this still count as a disaster, since I caught it in time?

Here's a photo of the finished cake. I'm sorry I didn't think to take a picture of the Dali-esque Lego figures in the oven - I was too busy panicking! 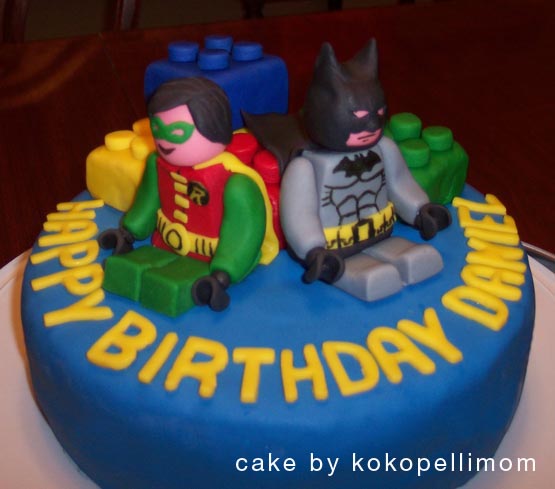 I did the exact same thing once! Except I put the handle that was supposed to go on a tea pot cake. I had read that you could do that to speed up the drying time. Yeah, turns out that was gumpaste, not fondant! It was just a blob in the oven.

Wow!! What a great cake. Sometimes the best cakes come from a disaster. I wanted to do a lego cake for my boyfriends birthday to recapture his youth so this is nice to see! Great figures and I love the details on the belts and the abs LOL

I absolutely agree! Your cake turned out PHENOMENAL!!

The cake is cute and the story is hilarious!

I swear I read on here to put the fondant in the oven to dry, too, so I tried it with my groom's legs. Yep, they melted! Your cake is awesome!!

Oh, that is a sad story. I'm glad you were able to save the day. The cake looks awesome!

That's Talent! i loveeeee your cake!

Your cake looks awesome! I love the lego idea. I have recently tried the MMF and it tastes great! But I think I have decided that I am only going to use it to cover my cakes and the just use the store bought fondant to make flowers and other details. I haven't tried the other home made fondant recipe on here. Thats next on my list of things to do.

Your finished cake is banger though!