I have taken the Wilton Courses that show how to make roses out of fondant with a flower cutter. (The cutter with 5 pedals on it) However, I have read where others have made roses out of a regular circle cutter. Does anyone know where I can find a tutorial on this? If not, can someone explain to me how this is done with a circle cutter?

I've been using a circle cutter because the Wilton 5 petal cutter doesn't make the size that I need. I'm using Nicholas Lodge's gumpaste recipe and it is totally different from the results I got with Wilton's recipe...it comes out bright white and almost springy and fluffy. It also doesn't smell bad like gum-tex does. (LOL, I sound like a commercial but if you haven't tried it yet, you should.) It dries faster and looks better too. I use a little bit of tylose mixed with water for the glue.

First, make the center on wire and let it dry. Make it about the same height as the circle that you'll be using. I bend a hook into the wire, dip it in glue and then push it into the center from the bottom. I've made some centers from foil but it's harder to get the right shape than it is with just gumpaste.

Make a couple of petals with a circle cutter (I've been using the medium metal wilton circle), roll into an oval shape after it's been cut, thin and soften with the ball tool, and attach them to be the rose bud. Let them dry a while.

Make more petals the same way, rolling the oval a bit longer. I also roll the ruffled edge with a toothpick, which I saw in this tutorial: http://cakesbyfrancesca.com.au/videos/rosetutorial.wmv (takes a while to download and watch but it's worth the time) After about the 5th petal, I start putting the glue just on the edges of the petal in kind of a u-shape, and then putting the petal on so it's more of a cupped shape.

Last night I was experimenting with drying some of the outer petals on spoons for a more open shape. It seems to work as long as you only let the petals dry 5 or 10 minutes. I forgot a couple and they were hard to stick on the rose when I remembered an hour later.

I used the Wilton calyx cutter because that's what I have 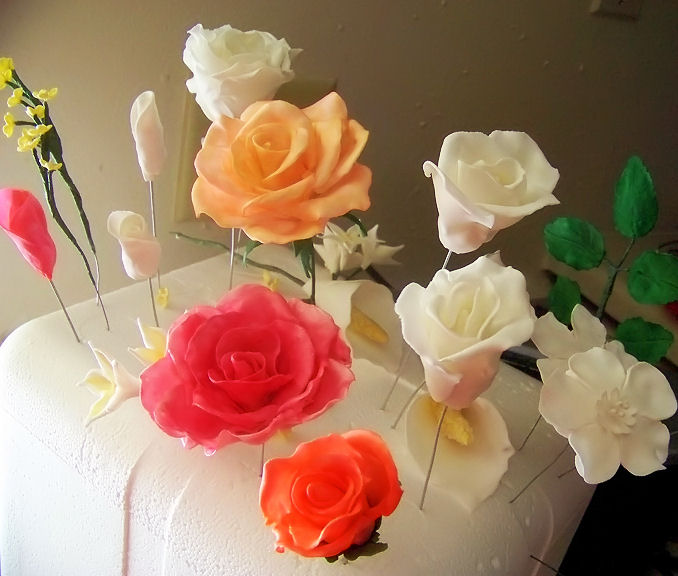 Edna to the rescue ... she's got a great tutorial on this on youtube.