I thought it would be fun to start a Cupcake Club like Oprah's Book Club and test out different cupcake recipes. The intention of the CCCC is to explore new recipes and techniques.
This is no place for bashing... constructive criticism only. You can say you didn't like a recipe, but say why, and if you have suggestions for 'fixing' that issue. Example: "The flavor was good but the cake was too dry, so I added 1/4 c. more oil and 1 egg." Or something to the effect of, "They came out dry, did anyone else notice that? What did you do to fix it?"
The first time you should follow the recipe as it is given, otherwise you're not truly testing the recipe. Then... if you loved it... you're done. If you felt it could be improved, make your improvements and post what you did.
...Anyone can jump in any time! If the sound of the recipe doesnt appeal to you then try the next one.
Thanks to the ladies on the How about a thread to seriously discuss making cupcakes?????" thread for helping me out with this!
Rules:
1. Have fun!
2. No bashing!
3. Start with original recipe.
4. Give constructive criticism.

Hello Fellow Cuppie Addicts!!!
Here is CCCC recipe #12, hope you like it!

Cupcake preparation
Preheat oven to 325. Prepare cupcake pans with liners.
Sift flour, baking powder, baking soda and salt and set aside. Place brown sugar, peanuts, peanut butter, butter and cream cheese in a mixing bowl and mix for 1 min. on low. Turn up to medium and mix for 3 min until well combined.
Add eggs one at a time mixing well and scraping sides. Add dry ingredients slowly with mixer on low speed. Mix until incorporated, about 30 seconds. Scrape down the sides of the bowl.
Add sour cream and vanilla and mix on med for about 15 seconds. Remove bowl from mixer and add chocolate chips, using a rubber spatula, combine thoroughly. Fill cups about 2/3 of the way up and bake at 325 for about 30 minutes. Cupcakes are done when a toothpick inserted in the center comes out clean. Allow to cool completely before adding Goober Gobble.

Chocolate Goober Gobble
Use the whisk attachment on your mixer to whip peanut butter and melted chocolate until very smooth and shiny.

Assembly
Core out the center of the cupcake using a knife or (my personal favorite) a melon baller. What you do with the scraps is up to you. Fill the hollowed out cupcakes with a heaping tablespoon of Goober Gobble.
Serve immediately.
I hesitate to suggest further embellishment of the Goober Gobbles, but what the heck! To turn these fun cupcakes into a carnival, sprinkle one or more of the following over the Goober Gobble: Chocolate chips, chocolate chunks, raisins, chopped peanuts, chocolate covered peanuts, peanut M&Ms. Etc.
After assembly, you may keep the Chocolate Chip Goober Gobble Cupcakes covered in a tightly sealed plastic container for up to 48 hours at room temperature.
[/quote]

This must be very, very, very good!!! I had Marcel book (Death by Chocolate) and lost it (still looking everywhere for it)!!!!

This sounds really nice, I like the idea of a Cupcake Club. Count me in. I will try the recipe this weekend my husband loves chocolate & peanut butter He will be our biggest fan and taste tester.

Is anyone else having fun just trying to say, "Chocolate Chip Goober Gobble Cupcakes" ????

They sound wonderful, thanks for the recipe.

Ok Here they are! 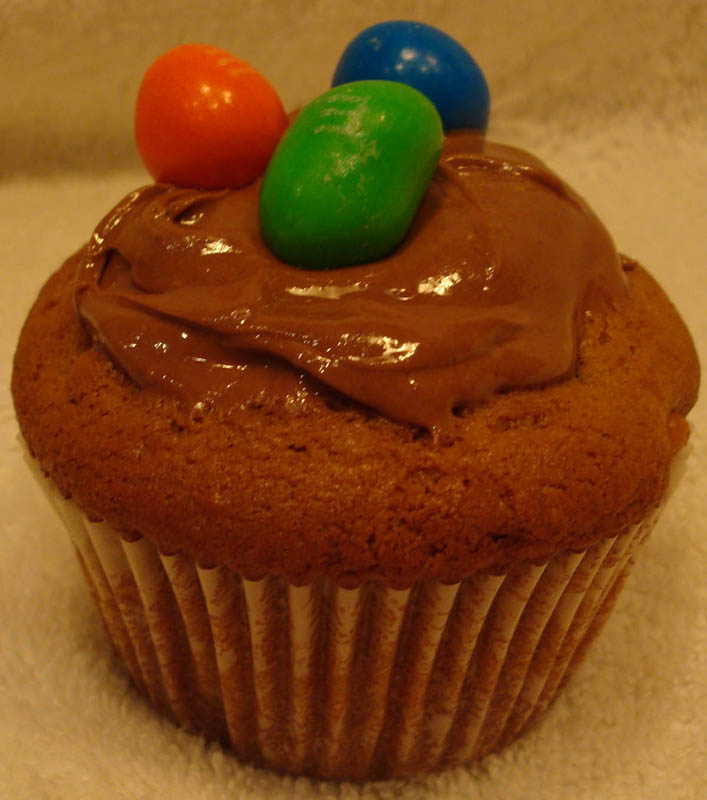 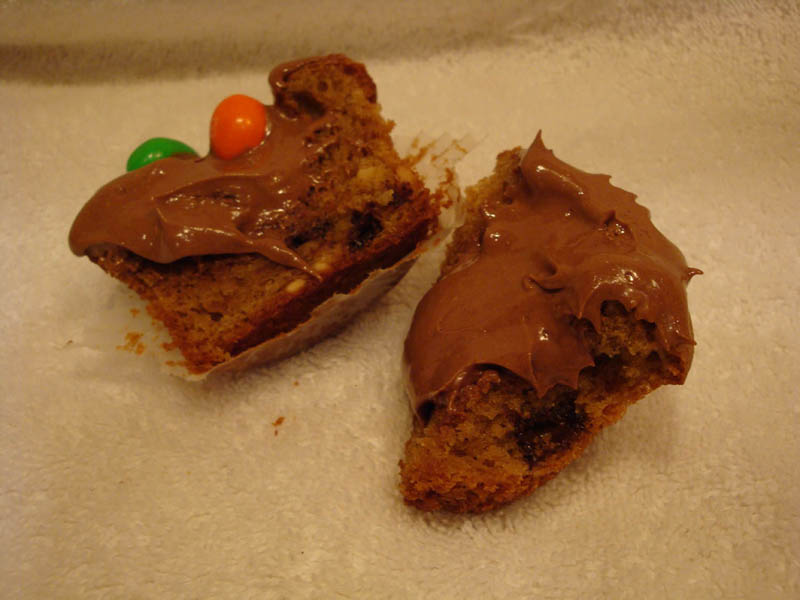 Those look delicous! That gooey center looks so yummy! What did you think as far as mixing, baking, texture, tasting etc?

OH MY....definately will have to try these when I get back in town, me loves peanutbutter and chocolate!! yummy mummy!!

I love that you added a picture. These look soooooo yummy!! I can't wait to try them!

I made these cuppies a couple of days ago and I thought that the cupcake itself was dry. I also didn't like the nuts in the cake. I loved the flavor and the Goober Gobble was delicious! I topped them with milk chocolate ganache because I needed more chocolate and that helped but they were still dry. Next time I will omit the nuts and cook them at a lower temp.

That looke so yummy. I want to participate, but I am not much of a baker. I am hoping that in doing so, I will learn. Anyway, how long does the recipe last? Do you pick a new every other week or once a month? I am just trying to figure out if my schedule will permit me to participate while the thread is live or if I might be a little behind everyone else. I am sure it doesn't matter. I was just curious. Thanks!

That looke so yummy. I want to participate, but I am not much of a baker. I am hoping that in doing so, I will learn. Anyway, how long does the recipe last? Do you pick a new every other week or once a month? I am just trying to figure out if my schedule will permit me to participate while the thread is live or if I might be a little behind everyone else. I am sure it doesn't matter. I was just curious. Thanks!

Hi there really isn't a time frame for this cupcake club. You try the recipe and post what you thought of it. They pick a new recipe about every 2 weeks. You try the ones you think sound good and if it doesn't wait until the next one starts. Have fun with it that's what it is all about!!

If any of you would like to post the next recipe, please pm me with your number.
thanks

I made these and they are really good. I didn't find the cake part dry at all. My family LOVED them so much, they're all gone

Hmm. There must be a fine line with the baking time then whether they come out dry or moist? I thought first, maybe because there's butter instead of oil but with all the peanut butter, and that, should bring the moisture in I would think. I have Grandkids cakes to make this week but I still want to put these on my list to make.

I am sure that's it! I baked mine too long for sure! Hehe! I feel like an absent minded professor at times! lol

The second I smell them I pull them out! My pregnant sense of smell probably helps me a lot

Awwe Congratulations!!!!
I loved being preggers!

. I love being pregnant too, but it was so much easier when there weren't as many kids

. Now I just feel so tired all the time. But I LOVE having a big family.

For those just catching on, here's the link to CCCC #13:

Here's the link to the thread where I posted all the cccc recipe links.