Oh! They ARE cheaper!! I forgot that they carried pastry fillings... thanks.

I just went through and got some great ideas and wanted to thank everyone for the post, I also wanted to know when adding the lorann oil to the cake batter due I still add the vegetable oil or does that replace the oil? also when flavoring buttercream with lorann oil do I still use one dram or does it depend on how much buttercream I am using? I am new to the gourmet flavors all my cakes are basic with basic buttercream so again I am very grateful for this forum.

The flavored oils are like an extract, but made with oils instead of alcohol so they work well in chocolate and candy.

They are super potent so they are mostly sold in tiny little bottles, called drams, that are qual to 1 teaspoon. You can buy larger bottles directly from their website https://www.lorannoils.com/c-6-super-strength-flavors-candy-oils.aspx
but the best price for the drams is at Fondant Source .com (sold in 2-dram packs).

Super Wal Marts have begun carrying them, but not in my town.

I use 1 dram in the WASC recipes and in buttercream, but it also depends on the flavor so you have to experiment first. Some of their flavors seem to be much more potent than others.

I use 2 drams of the butter flavor in my MMF.

I e-mailed www.amoretti.com last night requesting a catalog saying that were highly recommended (

THANK YOU linstead!) and they called me this morning to make sure it was okay if they sent samples.

Of course! Bring 'em on! After talking to her more she decided to throw in a few extra samples and she said that thier samples are free, so if I want to try something before I buy to just call and ask!!

She said their flavors are used by top cakers and win competitions left and right (well, in better wording than I'm am repeating)...

AND... she gave me even more flavor ideas!

Oh, and I forgot, they have anew flavor from the Tonka bean, which has tones of vanilla, almond, cinnamon, and cloves. The bean itself is illegal in the US and UK because the seed contains coumarin, which can be lethal in large doses, but they have captured it's flavor.

Thinking about that chocolate layer, I doubt it would stay crunchy when hardened between moist cake, but I'll give it a shot anyway.

Oooh, I can't wait to try out these new flavors!!

This is one of the best threads EVER!

What if you add paraffin or paramount crystals to the chocolate first? And maybe a thin layer of buttercream on the cake first?

The flavors sound so awesome. Can't wait to start expeirenmenting!

OMGosh!!!!! This thread is fantastic...so many ideas and I'm not sure which one I want to try first.

MacsMom....thanks for all the different flavor combos. Not sure if it's been asked/answered or not..but which ones do you find that are your clients favorites? 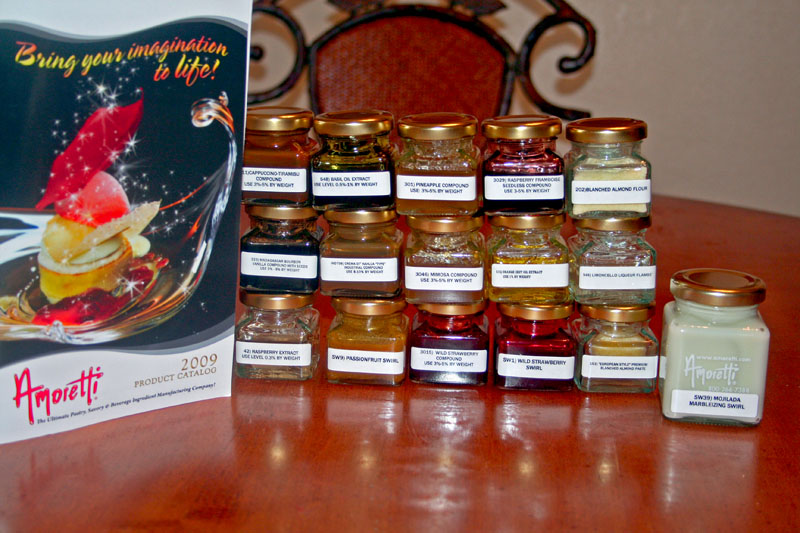 Not sure if it's been asked/answered or not..but which ones do you find that are your clients favorites?

so we just email or call them and they will send out free samples of our choice???

those samples are amazing! i emailed yesterday but no response yet. i am in canada though so they might not send to me.
what to try first...!!!!

They just emailed me! Because I am in Canada I will have to pay the shipping.
Not sure what the price of shipping will be though. Waiting to hear back from them.

I would love to get the free samples, but don't they have a min. of a case per flavor---like 12 bottles? That would be ridiculous for someone who doesn't have a high turn over rate. Now for a coffee shop that goes through flavors I could totally understand, but I would hate to "love" something & not be able to buy it

Their ordering guidelines say "No Minimum Order" ... I emailed and requested a catalog and asked about minimum order requirements. I'll post what I find out.

Thanks for all the ideas, these flavor combos sound amazing!

If they don't have a min order I'll do a jig. Maybe I was looking at the wrong pg (crossing fingers)

The information in this thread is priceless. Thanks to MacsMom & everyone else that has jumped in to help the OP. I think everyone that reads this thread will end up learning about something new. CC is the best site with the BESTEST of people.

Oh, & w/ fondant source.com, they were very accommodating. I needed some things that weren't available to put in the shopping cart. I emailed & they gave me the items at the internet price

Thanks for a wonderful thread.

I can't wait to try these. I think I'll start with Raspberry Truffle!!!

just emailed them, i'll see how it goes!

Andrea from Amortetti just called me to get an idea what I am looking for. She made a couple of suggestions for the "burnt orange" wedding cake I am doing in April and is sending samples of their mimosa compound and champagne (not sure if it is extract, oil or compound) along with a sample of their orange food coloring.

She stressed that they have NO minimum order requirements and are happy to send out samples if we aren't sure about something. She said that they do not want their customers to order something and then be stuck with it when it doesn't do what they wanted/needed.

Macsmom first off I would like to say thank you for sharing all your information. It is very sweet of you and very appreciated! I have a question for you when it comes to cakes like your banana split cake. Do you make one WASC recipe and then divide it and add the needed ingredients to the divided parts? Also for the banana and cherry how much puree would you add? Again thank you so much you are amazing!

I spoke with Andrea this morning and I should have my free samples next week!