How I Did The Snowman

I have been getting pm's and questions about how I did this snowman cake.

The hat is made from fondant. I basically took a round piece and kind of wrapped the head and then tucked it under itself so no one would see a seam. Then I added a fondant ball to the end and secured it to the snowman with a toothpick. The texture you see is royal icing dyed the same color as the hat. I just kind of piped and smooshed it around till I was happy with the look. I then brushed some pearl dust on it to give it a little "shimmer".

The scarf and edge of the hat... I rolled a base color (into a rope and then flattened a bit) then I rolled and cut strips of white and laid it out on my base color. After I had the white laid out to make my stripes, I rolled it into the blue a bit (don't make it too thin or it will split at the color separations). Then I just picked it up and wrapped it on. The knot on the scarf is an illusion. I just cut a small piece so it would look like it was tied. No way was a knot going to happen without tearing the scarf.

The Mocha Peppermint Truffle Fudge Filling... Sorry about some of the measurements, I'm not much for recipes and kind of "wing" stuff as I go.

The base recipe for the truffle filling is actually from www.allrecipes.com. I love making those truffles so I knew what I was going for before I started.

To that recipe I added some Fat Free French Vanilla creamer that I dissolved a couple tablespoons of decaf coffee in. I don't remember how much cream I added as I was looking for a consistency that would hold up but not be super stiff. The peppermint came from peppermint oil. Just about 5-6 drops gave enough peppermint to the batch so that it would be in the filling and not overwhelm the cake. 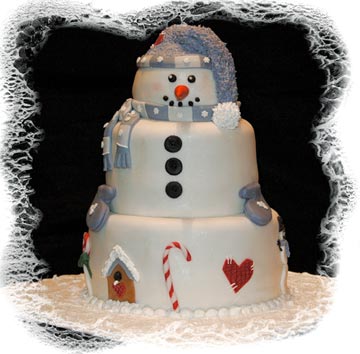 That is so cute! You have done a brilliant job! I love everything about it.

That's an amazing cake. Beautifully done.
How nice of you to share with everyone else!
Thank you

Thank you so much for sharing!!!

Thank you for sharing your instructions. Your snowman is adorable. I love all the details. This is a super cute cake.

Thank you so much for sharing this with us. The snowman is precious!

He is so cute. The truffle recipe from allrecipes is soooooo good! Thank you for sharing.

Thanks for all the directions. Snowmen are my favorite, and yours is adorable

Thank you so much, the recipe sounds delicious & your snowman is wonderful.