i just bought the wilton halloween cookie cutters (set of 1

because it was on clearance after halloween! i was wondering if anyone has some ideas on how to use them to decorate everyday cookies (not halloween themed)?

haha!! i don't know how that smiley guy got up there but it was supposed to say "set of 18"

I have those, the house can be for housewarming parties. The cat is cute for just general use animal lovers. I like using the leaves for fall. The cauldron is good for camping themes also.

The apple would be one that is good for everyday use.

The cat isn't a typical Halloween cat so you could use that all year.

The leaves would do for the whole season of fall.

THe tombstone can be used for any over the hill birthday.

You can also many of them for a theme like Harry Potter too.

I think if you cut out the spider and move its arms it looks like a piece of wrapped candy.

The Frankenstein head looks like a piece of bread upside-down.

the ghost in the bottom left looks like it could be jabba from star wars or ursula from ariel.

the broom could also be for an african american wedding.

The one in the lower right corner also looks a bit like a piggy bank.

Hmmm...cauldron could be used for St. Patrick's Day pot of gold.

Candy corn could be used as a blank palette for anything. You could draw a cheerleader's megaphone in it.

Spiderweb could be the base for a flower.

wow!!! thanks for all of the suggestions!

Candy Corn could be a slice of pie or pizza !!

Oh, I love the ghost as Ursula from little mermaid idea. I'll have to use that one! My suggestion is to use the tombstone as a purse with a strap.
I do that one.
Heather

* tombstone could be turned into a wardrobe from narnia
* apple could be a peach or any fruit with leaves on top
* bottom left ghost could have the little tail part cut of and be used as a child playing dress up
* broom could be a paintbrush
* turn the cauldron upside down and you can use like an outer space helmet for an alien or a fish bowl
*Spiderweb for obviously spiderman, or as "great job" stars or fireworks
* frankenstein could be an old lady with crazy hair and earrings sticking out (instead of the neck pins)

Good question...it has really gotten me to look at these differently. Thanks! We should do this with ALL of our cutters!

i would have never thought of using these cutters in all of those ways!!!

so creative! thanks again for all your suggestions!

I have used the ghost cutter for all of these... 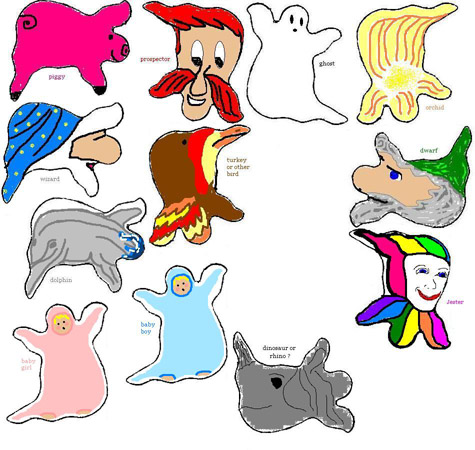 ok, so my friends and i are planning to get together and decorate cookies for christmas and i think i can get away with using most of these cookie cutters for an xmas theme...

i was going to say the cauldron could be an alarm clock or even a fish bowl if you lop off the two legs..........snowglobe is a great idea for it too!
I think you could probably take the shapes and print em' out and just start drawing and see how many different things you could make.....it's really gonna make us all look at all of our cookie cutters differently huh??

That picture reminds me of a game I used to play with my kids when they were like 2 or 3 and couldn't really draw that well...I'd make them draw something, it was usually a blob of some sort with some scribbles and then I would draw in details and turn it into something....a whale, a shark, an elephant, my kids used to get such a kick out of thinking they "almost" drew an elephant all by themselves!!! They used to display the pictures proudly telling anyone who would listen that they drew it "and mommy helped a little" LOL

I wonder if the frankenstein could be marge simpson?

The spider cutter could be a little girls face with pigtails sticking out.

You could use the bat and make Holly and berries, Gift tag cookies out of the Tombstone and frankenstein and a handheld bell out of the broom.

This is just pure genius. I never thought about coming up with other ways to use the cookie cutters. I'm tempted to spread out all my cutters and study them!

The spider looks like it could be used for a piece of wrapped candy or - with legs cut off and just a little remnant left of one leg - you could turn it into one of those thought bubbles that you see in cartoons.

i use the tombstone for a "gift tag" cookie.
i love halloween

This is a great thread! I'm gonna have to print it out and stick with my cookie cutters!! Thanks everyone!

Several times I've picked up a cutter and had no idea what it was so I posted it and asked for opinions. Each time, people have enjoyed the thread immensely.

Perhaps we could have a monthly "What would you use this cutter for" thread?