I am making a football cake...the client wants the New England Patriots team on it...she wants the plastic pieces, not a picture. I've been all over the internet looking for the team and I'm having no luck. Can anyone offer a suggestion on where I might look for this item?

Thank you for your help.

... I assume you tried www.NFL.com, and I don't even know if they would have anything. Try searching toystores based in NE? I had a similar problem with a Red Wings Hockey cake. Hockey isn't that big in CA, and then it's the Sharks - NO players to be found........ I did purchase a set of 3 small wrestlers for $9.99 at Toys'R'Us, and painted them red with white accents, per the uniforms I found online. I know that's a lot of work, but maybe you can give her an option of doing something like that for more $$, or printing onto cardstock & taping the little paper-cut-out players onto popsickle sticks... maybe she would be okay with that, given the alternative of "nothing". Maybe you can also suggest putting the Patriot Logo in the middle of the football field or something? I did that for a SuperBowl party one year, it's not that hard of a logo. Good luck with this!

If you cannot find anything else.....
How about if you search online for images of each player you want, then resize the photo to the appropriate size, print them in color (maybe 2 each so that you can place them back to back) , cut them out, cover in clear shelf paper or packing tape to protect and adhere to a toothpick to stick in the cake?
(I would cut around arms and legs to remove as much backround scenery as possible) 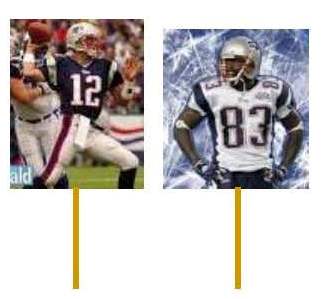 Edible images of the players cut out and mounted on fondant stick in the cake with toothpicks?

IMHO if she wants toys on the cake she should provide them. Honestly I don't think they make 'em.

I wonder what the Monopoly pieces are for the NE Pats Monopoly set? Maybe they are players? But you'd have to charge her for the game as well....