I really need some pictures of some vintage wedding cakes. My in laws anniversary is on the 12th of December and I would love to make them a real wedding cake. They got married in 1964 so this is their 42nd anniversary. My mother in law was 17 when they got married and she said they didn't have much money and she never had a wedding cake or a bouquet. I want to make this special for her, but I'm not sure on what kind of design. I assume lots of piping! I don't want to make a modern cake I want it to be the cake she would have had back then.

I think something that would help make it look "vintage" would be a topper similar to what they did back then...maybe the old-style/ traditional bride and grooms on top of the cake? Maybe you could find one on ebay?

I know my parents (married in '59) had a set of large satin wedding bells in very pale pink as a topper and the rest of the cake was very plain with subtle light pink decorations.

Looking at the pictures, it was gorgeous but very simple!

Very sweet idea, your MIL will be so touched!

Thanks for the idea! I've been looking on ebay for a topper but I'm not even sure what was "in" back then. I like the bells idea and I figured maybe the ribbon on top or tulle.

Here are some cake toppers from the 50's

I'll see if I can upload a pic of my wedding cake. We used my parents topper they had for their cake in 1957. 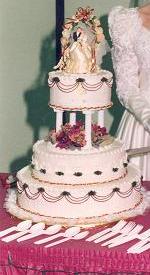 I really can't like the designs from that period of time, but I was doing cakes then. What I remember of them is, all buttercream, all white, sometimes pastel pink or blue buttercream roses, ruffled swag borders done with #104 rose tip, string work, sugar molded bells, doves, or angels, bridges, stairs and fountains. Yuck!

Sort of this kind of stuff.
http://www.jacquespastries.com/victorian_three.htm

Or yeah, just do lots of white on white swags, strings, and buttercream roses.

Here are some pictures from some 1970's wilton books that I have. If you don't see anything you like I can get more. 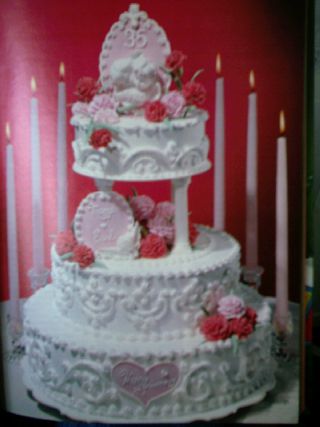 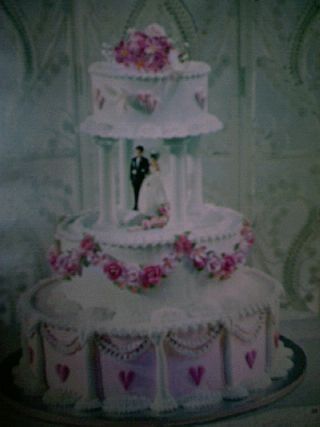 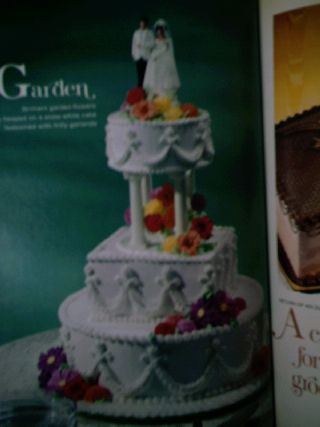 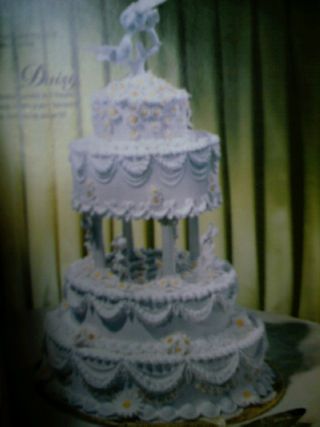 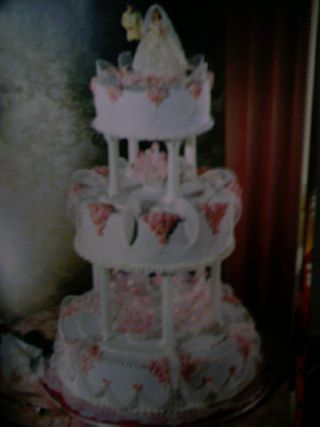 This is the cake I did for my course 3 final. It is "vintage" looking - and was not difficult to do at all. I did this one in ivory colors, but you could easily change it to white.

Brendansmum, you're so sweet to try to make this cake in the style they might have had if they'd been able to!

I have several old books that have wedding cakes in them. What I do recall is that most of the time the cakes were round, stacked, and very ornately decorated. Plenty of heavy draping (tube 18 zig-zag over a 104 ruffle, overpiped with maybe a tube 15 zig-zag, tube 2 double drop strings on top of that). Sugar bells were "in" and would be placed at every other starting point for the drapes, with roses at the points without bells. Rather heavy bottom borders that were created in multiple layers.

Fondant was nowhere in the picture, it was all crusting buttercream, and lots of it!

Toppers were usually a pair of bells or a bride/groom, on some sort of plastic base that elevated them off the cake. There was generally gathered lace around the base and sometimes a heart frame in the back that would be covered in the same lace. What we now consider tacky and gaudy was the height of fashion back in the day!

Go figure! Once in a while you'd see two doves, but not often.

Sometimes the top borders were vertical shells piped to "drip" down the sides of the cake about 1/4 of the height, with double or sometimes triple drop strings hanging from them. Many times these strings were overlapping. Those layers were the least decorated ... there would be "white space" between the stringwork and the bottom base. Some bakeries would fill in this space with a vine and rosebuds.

Most people ordered their cakes from the local bakery; there wasn't a huge "cottage industry" of cake decorators in every town to select from so you went where you could afford the "cake of the baker's dream" ... my mother (who has been married for 55 years to my dad) tells me there wasn't much in the way of "consultation" back then. You went in, told them the date, number of servings, and picked out a topper. Your cake was delivered to the hall and parked on a table and you were grateful you had one. The skill of the baker was evident in how ornate your cake was decorated. The more skill and experience he had, the more elaborate your cake would be. It was a point of pride for a baker to be able to pump out dozens of wedding cakes each weekend in and around the everyday cakes and birthday cakes his bakery had to handle. And if he was particularly skilled, it always showed in his wedding cakes. And chocolate cake was almost unheard of.

Of course, 1964 was at the beginning of the "turning point" in wedding cakes .... the home baker who had learned to decorate a cake or two was just beginning to get a toehold in the industry, and you might see white plastic pillars between tiers now, but not necessarily every tier. The way I've seen them is that there might be a 3" set of white grecian pillars separating the top tier so that it could easily be removed for freezing and the rest of the cake cut to serve.

There's lots more of the history I could tell you, but I think you are getting the picture. Another thing you might want to "research" is to call some of their friends and ask if they have a photo of their own wedding cake from that era. You can judge by those photos how involved you want this anniversary cake to be, whether or not you should have pillars, etc. Good luck with it!

p.s. if you would like me to send you some photos from those old books, just pm me and I will try to get them to you asap.

I did a small two tiered in my wedding cake gallery on my website. It has yellow roses on it. The original picture was so hard to tell but the couple said I hit the nail right on the head!