My twin boys are three years old and i need some advice on potty training them. I have started already about a week ago but haven't had much progress. They wont get anywhere near the toilet and they do play on the pottychairs but don't really want to use them for that purpose. So far i have had them pee at least twice a day on the floor(carpet by the way) and in the week poop three times on the floor. They will pee in the potty and i do offer rewards but it seems like they just get too busy and forget and have accidents. Any advice would be greatly appreciated. 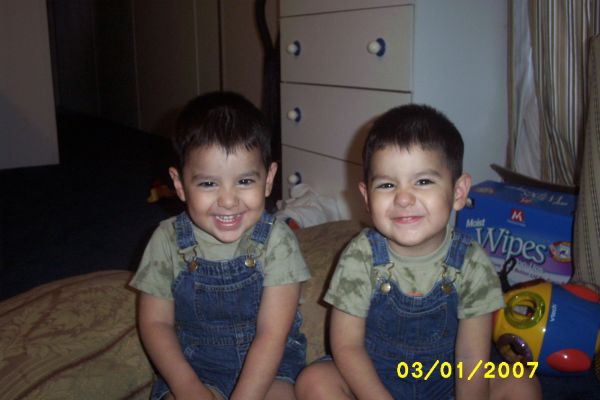 Off subject-- they are precious.

OK. On subject-- keep rewarding. Also have them help you clean up-- plastic gloves of course if warranted. I had my son do this, and it really helped-- especially when I was sure that he could control it. I didn't get angry, just matter-of-factly said, "OK, we can't read or play until we get all this cleaned up" and then had him help dry up, get his clothes changed and dirty ones in the washer, etc. My sister did this with her daughter too. It really seemed to get the point home-- not so much punishment, just natural consequences of actions. I did reward my son with Skittles (others use m&M's but he can't due to peanut allergy). Day care did the same. In fact we started at 2 1/2 because they were all starting together (for any interested parents) since many of the kids were ready to move to the 3's class and needed to be potty-trained before that. My husband and I called it "potty boot camp" and the positive peer pressure really seemed to work. If they go to anything like that, it could help. Also watching Daddy sometimes helps, though mine is 4 and doesn't stand yet. (Can't "reach" and I was NOT cleaning up the messes resulting.

Good luck. It's not fun, but it's SOOOOO nice when it's done.

I forgot- for the "forgetting" because they are busy playing, try having a timer set for whatever you think is reasonable, and have them try "just in case" when it goes off. I also make mine go "just in case" before we leave the house and he will STILL try to protest.

They aren't in daycare so their not really around other kids except my other two. Thats another question, My oldest is five and a girl. I have to let the twins run around naked because they will not wear the underware and i can't afford to buy pullups. I have three kids in diapers and they all get the same size and brand that i buy in bulk at Sams. Anyway, back to the question, Do you think that it is ok for my 5 year old girl to see my twin boys running around naked all the time? I don't want to traumatise her or anything.

I don't know on that one. It may depend on your family's overall attitude. I have been debating this one about my 4-year-old and his cousin (girl) who is 3 1/2 who used to bathe together. I think the general rule is that when they start noticing differences between boys and girls, it's time to stop that kind of thing-- and your daughter may be old enough. Maybe bribe them to wear the underwear to start with? Or how about swimsuits-- will they wear those? I'll bet you could get those really cheap at thrift stores or consignment sales and let them wear that for now?

Good luck. I know it's not fun.

If you don't mind me giving you advice that has worked for me the 15 yrs. that I had an infant to 3 yr old daycare. Here it goes. Do not put those confusing pull ups on them unless you are going shopping. They act like a diaper and the children have had 3 years of being use to the way diapers feel wet. Let them pick out some big boy underwear. Have them wake up early, run to the bathroom and when they finish, let them put on their big boy underwear. Yes, they will leak. They will also make the boys unconfortable. Some kids don't even mind this feeling, so they have to be brought to the bathroom more often. Next, they do not get to do anything fun until they use the toilet, meaning, no tv after breakfast until they potty. No going outside until they potty, no playing fun games until they potty. This seems cruel, but the way you go about this is to say, " Hey, do you want to watch Builder Bob on TV? Well, as soon as you potty, we can watch. or Who wants to go play outside? As soon as you go potty, we can go." Do not give in until they potty. No potty, no fun. Believe me, this process should take no more than 2 weeks. Also, for boys I never used a potty chair. I would sit them down, facing the back of the toilet, where they could hold on and it would automatically make them aim down and then they could flush. Once they were able to go on comand, they were then given a step stool and still held on to the back of the toilet with the lid up. Make sure it is extremely clean at all times. You also need to control how often they get liquids. If they requested a drink, I would ask them to go potty first and then they would get their drink. This way if theywere thirsty, it made them learn how to get control of their muscles so that they could go on command. The whole process should only take 2 weeks for them to fully understand and be able to get control. If it is taking longer, maybe some steps not being followed. The only time that I would have problems would be when the parent insisted on using pull ups and the child would think they were wearing diapers.

When my son was two, he was big into Star Wars. To get him interested, my husband came up with the idea to go with him to the toilet and they would fight swords into the toilet. Needless to say, they had some cleaning up to do after every use. Well, it was one of my husbands favorite bonding moments. LOL And no, I did not let anyone in my daycare use this technique.

I forgot to mention why I refuse to use a little potty chair. Some children will get so use to little toilets that when they go shopping or to eat out and need to potty, there are no little potties in the bathrooms. When the child sees the big toilet they might panic and have an accident because the big toilet scares them. If you start off with the toilet in your house, then they won't notice a difference in the big restrooms at the stores or restaurants.

I just started potty training my 2 1/2 year old son a few weeks ago. Some people say that it only takes a week to have them fully trained. My son is not going by that rule. I knew it would take awhile for him to get it. He wouldn't have anything to do with the potty chair, so I just let him sit on the toilet with the little seat that goes on top of it. The first few times, he just sat there and I read him a book to get him to stay there. After about five times of just sitting there, he started using it. He lets me know when he has to go sometimes, but mostly I have to keep asking him. Some people say that stickers work well for rewards. What got my son started was that he saw his male cousin, who is four, going to the potty. That got him interested in it.

Ok, my boys wont even let me put underware on them. If i force them on them they scream and pee at the same time so then i just have to change them again. As far as trunks, their ok with them but they still just pee and they are those who don't care if theyre wet. I know that i'm not putting 100% into this and that is my problem. I work 20 hours a week and when the babysitter comes over i Have to put diapers on them cuz she will not clean any accidents. They will use the potty when i put them on it, but if they have to go and i don't put them on the potty then they just go on the floor. I should also mention that they are behind on their speech and see a speech thereapst twice a week and at their evaluation she said that they had the perception of one year olds. Could this also be part of the problem? Same thing with the toilet, their scared to death to sit on it even with the little seat on it.

My son was a late talker. He still doesn't say too many words. Everyone told us that he was too old not to be potty trained. We didn't worry about it. He couldn't go "pee pee" if he didn't know what it was that we were telling him to do. When he started using words for his actions, we started training him. We waited until we knew that he knew what we were saying.

It sounds strange but try putting some cherrios in the potty and tell them to aim at the target. It worked for my oldest. He would also poop for those little gold stars. We had a chart in the bathroom and every time he went he got a star. After filling up the page he got a special prize, usually a new, cheap video....got I HATE Barney