Are These Good Enough?

Okay cookie people, I need your help! I made these to enter into the fair this weekend....do you think they are good enough? Or should I just enter one of them? One is for the decorated sugar cookie entry and the other one is for the "theme" contest...which basically means any baked good that has to do with the theme, which is Kick it up. Please please give me some honest feedback. Thanks. 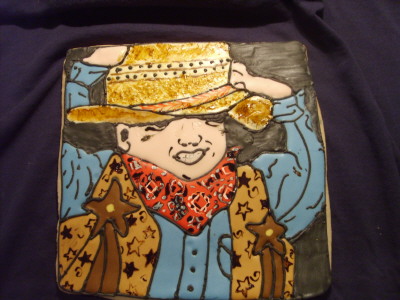 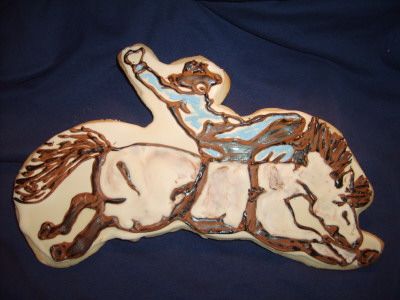 I love them both, but the first one really does have the best detail in it.

Fabulous job!! I wish you the best of luck!!!

I agree, go with the young cowboy. It is so detailed. Both of them are incredible. You'll win!

I love them both...but agree with the others-the first one is the one! Good luck!

I vote for the first one too!! Great...well done!

Thank you everyone. I am planning on entering them both in different categories....if they are both good enough to enter. If one wasn't good enough then I would only enter the other one.

On a side note, I don't understand how 140 some people have looked at this and only four people left a comment.(which I very much appreciate so don't misunderstand)....is it really hard to say I think they both aren't good enough/one is good enough/both are good....watever your opinion is? I can understand low comments if people don't know an answer, but everyone has an opinion.....

Chimming in, BTW this is my 1st look! LOL

The 1st cookies is awesome, the detail is incredible. You should win by a mile. ( if not the judges will need to be taken outside.....if you know what i mean, JK!)

The 2nd cookies is also great, the perfect example of " kicking it up".

They are both really great and you should win hands down!

Good luck and let us know how you did!

I agree- both are great but the 1st one has incredible detail. Best of luck to you! I am on a lot of message boards for many different things, and I can tell you- ADD A POLL!!! People never want to take the time to respond unless it's something that benefits them (usually- and I'll change that to 'most' people). This is my first look and I responded- but that's not always the case. I try to make the most of my time on here because I work a lot and don't always get as much time as I'd like to to just browse and get what I need to done.

They're both great- enter both! The first is so detailed and the second just fits the theme perfectly! Good luck!

OH, for sure enter BOTH..... they are amazing ! It is really hard to type, but I have my fingers crossed for you !

I would definately enter the 1st for the decorated contest and the 2nd for the theme. They are both very good but the 1st one is outstanding!

The first cookie is incredible in detail! I LOVE IT. I'm not fond of the second. Probably just because the first one is so amazing I am comparing it to that one.

I love the first one a lot more. I would enter the first and not the second. The second looks a bit too messy. I think what throws me off is the shading within the horse. It looks more like smudges than intentional shading. Although they are for two different entries, I would still only enter the first.

Was that mean? You wanted honesty

Dont take the non comments as personal. We have a lot of lurkers here who dont ever give their opinions but rather like to cruise the forums and "see" what's out there. I did it for awhile before I signed up and then started commenting.
But I also agree with the general consensus here, the 1st cookie is very detailed but the 2nd one is deff more than just "good enough", it's way cool. You cant help but win with those as entries!

I think they are both great. If you could enter both of them then to so. I am sure you will win. Let us know how it goes

I like both of them - but if I had to choose between the two - I am with most other CC members - I love the first one!! All I can say is WOW!!!

As to your non-response question: I do cakes some, but not many cookies, and have never entered a fair, so I feel my opinion would not be an educated one in the matter, so I probably wouldn't respond. I was curious to see what you had in your thread, so I looked! Guess I'd be a lurker here! I think most people don't respond if they think they can't help you. Good luck!

Thank you everyone. I am planning on entering them both in different categories....if they are both good enough to enter. If one wasn't good enough then I would only enter the other one.

On a side note, I don't understand how 140 some people have looked at this and only four people left a comment.(which I very much appreciate so don't misunderstand)....is it really hard to say I think they both aren't good enough/one is good enough/both are good....watever your opinion is? I can understand low comments if people don't know an answer, but everyone has an opinion.....

Sometimes, the topics are listed on the front page as "most recent topic replies" or whatever it is. This is how I actually found your thread. I have no interest what so ever in cookies or cookie decorating as I am into cakes myself. So, I normally would have just left this thread without commenting, but wanted to give you some feedback regarding this issue. Some people (myself, again) don't always have the time to comment on every thread they read. A lot of times, I'll go into a thread thinking it might be informational, but knowing that I don't really have anything to input. A lot of times, though, is exactly what I said..the title of the thread isn't informative, so out of curiosity, people will open it to see what it's about.

I, personally, don't really like either of your cookies. And that's a reason I don't comment often either. (1) I don't like hurting people's feelings and (2) I don't have a whole lot of experience under my belt so I feel like, "Who am I to give negative feedback?".....and I completely refuse to tell someone something just to appease them, or just to be nice.

HTH and good luck in the fair.

they are both really good - the first one is my favorite - I really like the horse too. Good luck (although I don't think you'll need it!!)

I like 'em both! Throw them both in the ring and see what happens!

The detail in the first is amazing! The second really captures the theme. I say enter both. Good Luck!

I am a huge fan of your cookies...I always love to see what you have done!! I absolutely love the first cookie...hands down winner in my book!! I like the 2nd one, too, but if you want honesty...it's not my favorite of yours. I think it's something to do the face area of the cowboy...I know it's too little of a space to get in a lot of detail, though. I like it, I do...I would enter it. Good Luck!! Jodie

I like both of them.Its hard to pick just one!!!!

Unlike everyone else here, seemingly, I really like the second one a lot better. I like the smudging and I think it does look intentional, but I'm better at designs and not so much at realistic-looking art, so don't know how much weight that opinion has!

The first one seems a bit off...like crooked or something...I can't really tell what he's doing. It is obvious, however, that a lot of work went into the detail and you've done a great job overall.

Good luck in the fair!

Catita74 I like the second one better too. It's more artsy. The first one has some problems with the left arm not matching up to the hand and the face is not quite right.

As for people not commenting read the 1000 similiar other complaints made by other people. It happens.


Good luck at the fair. I am going to enter too just haven't made up my mind yet on what to do.

I love the first one a lot more. I would enter the first and not the second. The second looks a bit too messy. I think what throws me off is the shading within the horse. It looks more like smudges than intentional shading. Although they are for two different entries, I would still only enter the first.

Was that mean? You wanted honesty

thank you everyone for your input. I fixed the arms a bit on the cowboy. he is a bit "off", which is why I was asking if I should enter him or not, because he isn't "perfect". I take the good and the bad when I ask for honesty. =) Thank you for giving me your honest answers. I decided I will enter both of them, even though they aren't perfect, and if I win, Yay me, if I don't, Oh well. LOL. Thank you again everyone for your thoughts.