I'm looking for anyone who has done a white cake with black icing scrollwork or accents. I had a bride recently who wanted black scrollwork on a white cake. The lady who came to the tasting with the groom's mom used to do cakes, and told the bride it would bleed, and talked her into dark chocolate scrollwork instead. I say jillycakes black and white cake, didn't see any bleeding.

Has anybody else done this? Have you noticed a bleeding problem? And since the bride has ok'd dark chocolate scrollwork, would you argue the point if the majority of you guys have noticed no bleeding? I want her to have what she wants, but if it bleeds, I ruin the wedding cake, and that would stink.

I'd also be interested to know what type of icing you used, if you've done this.

I think if the bride is ok with the idea of the dark chocolate I wouldnt try to push her into the black because there is a possibilty it could bleed although I dont think its much of a chance what you dont want is for the cake to bleed and the mother in law to walk around all day saying i told her not to use black that would suck so of the bride doesnt have any complaints about the choclate use the choclate sounds yummy anyway.

I love this design. HTH K'ly 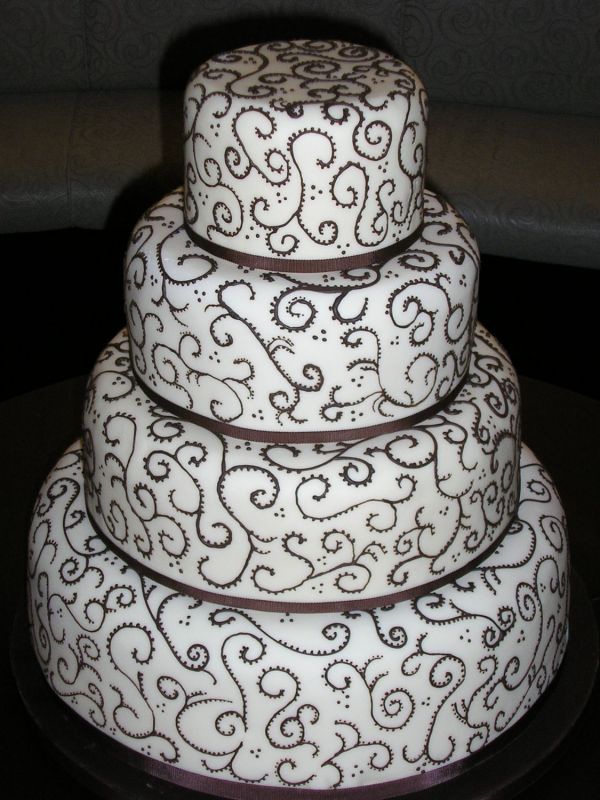 Me too. It's awesome. I guess I should just let it stay with chocolate scrollwork. I would really like to know if anybody has had bleeding problems with all those great black and white cakes I found in the galleries.