The Most Bizaare Cake You Have Been Asked To Make Is...

I just wanted to hear what you all have been asked to make, cake flavors, fillings, designs, shapes, etc. I thought this would be interesting to see.

I know that there has to be some things that seem "odd" that people ask for...

Well this week I had a request for a little girls birthday. She want Grave Digger with Barbie Driving! And she wants a REAL barbie.

I have agreed to Grave Digger and Barbie is negotiable.... Although it had changed from a John Deere Tractor with Barbie driving....

Well this week I had a request for a little girls birthday. She want Grave Digger with Barbie Driving! And she wants a REAL barbie.

I have agreed to Grave Digger and Barbie is negotiable.... Although it had changed from a John Deere Tractor with Barbie driving....

lol we lived in Iowa for a while and when I was reading your post I was thinking, wow that sounds so Iowa and I looked over at your location and got a really good chuckle.

well lets see, i was asked to make a 12in circle bright yellow smiley cake for after a funeral.....she is a really nice co-worker thats the only reason i agreed to it.

Not so much bizzare as wierd, I had a baby girl shower cake that the customer wanted done in all pale blue. This was her favorite color and she had also requested that the gifts be blue also. Go figure. Well, I just couldn't bring myself to do it. I posted the final result. She seemed to be pleased with the cake.

I had a bride give me an 3x5 picture of an old yucky castle in England nothing specail in looks but its where they got enganged. She wanted to surprise him with thier wedding cake to look like it. So I said I would do it. because no one else would even think of it. Here is the picture when they saw the cake they both cried because it was exaclty what they remember and wanted. I still think its ugly and could do better now since I have more experience but non the less they loved it! 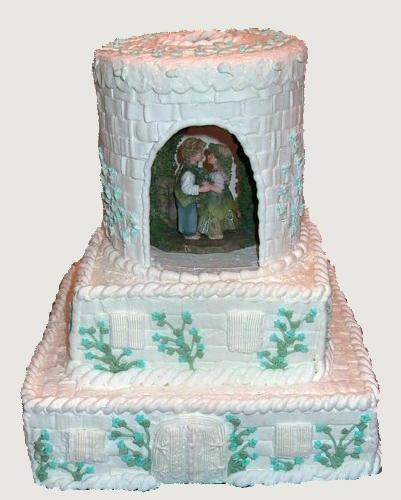 Well, this was strange to me...

I did a wedding cake that was based on a birthday cake photo.

45 "records" and musical notes made out of gumpaste.

Okay, not too terribly odd until I had to make the 45's pink and orange! Then, they wanted those super thin "candles" in the top.

Finally, they wanted names of their band and their friends' bands as record labels written on the records. They were all punk rock bands, so they had names like "Capitalist Casualties", etc. But, the oddest was the name of the bride's band (which I won't repeat here) because it's in the lanugage Africaans (sp?), and it means F*&* O#@!

I didn't find this out until I was at the reception and I asked one of the band members what it meant! I was stunned. Honestly, I didn't think to ask when I was decorating, but if I'd known, I don't think I would have made it. You can see it at my photos.

Anyway, don't know if anyone else will find this strange, but I did!

I had a lady order a Barbie cake for her sisters party; since the sister was turning 40; she wanted the dress to be all blck with a black veil over the barbies face as if in mourning.

She also ordered a cake with a hill with the sister's name going up one side & down the other.

On top of that... She wanted a round cake with musical notes on the side & an FSU logo on top for her niece. I had to get my daughter's cello music to help with the notes. She loved all three cakes.


lol we lived in Iowa for a while and when I was reading your post I was thinking, wow that sounds so Iowa and I looked over at your location and got a really good chuckle.

LMAO, Yeah the girls in my family are tom boys (although we seem to grow out of it) To many boys in the family, not enough girls! And grandparents being farmers!

I wasn't asked to make this cake specifically, but my friend Paula's b-day is around halloween & she was dressing up as a soda shop girl..She loves gory stuff...this is what I came up with:


Definitely the most bizarre cake I made: 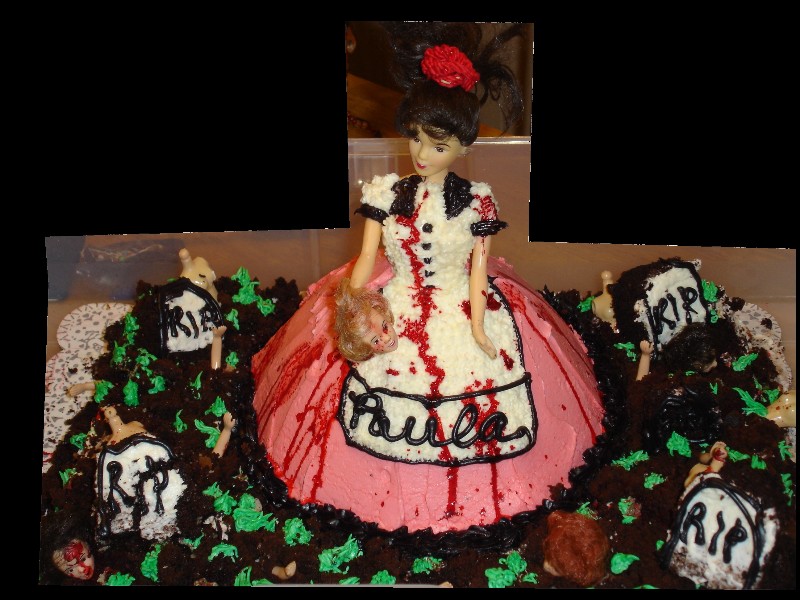 The most unusual cake I have ever made was a suprise 50th birthday cake for my aunt.....it's a toilet cake, complete with little suprises in the bowl. My grandmother though it would be funny and asked me if she thought I could make one, so I gave it a try. I was happy with the outcome, my aunt thought it was funny, and people are still talking about that cake at family gatherings. 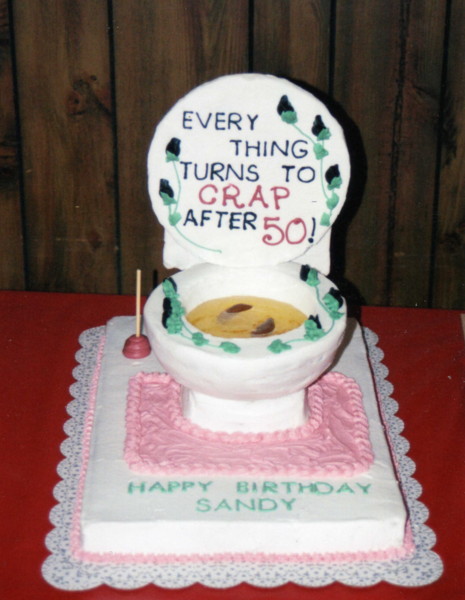 I knew that you all would have something! These are great!

SLK...hahaha..I'll have to say yours is equally gross too

These are so funny - kinda too bad it isn't included in the "Adult themed section" - I'm sure those were some surprising requests!!!

So was the bride from South Africa? Just asking. You won't believe with what

names the rock bands come up with here in South Africa.


BTW the spelling is Afrikaans.

The weirdest cake I have to make was for a secretary to the high school football coach. She had decided to quit in the MIDDLE of football season (we take our football seriously here). The cake was normal, run of the mill 1/2 sheet cake with a "pile of dog poop" on it.

I was asked to make an exploding cake with a balloon inside so that when it was cut it would burst in their face. I knocked it back, cos I didn't want my cake plastered on the walls and not even tasted. Plus I wouldn't even know how to do the balloon part!

An exploding cake? Sounds like a cake for Duff...... that guy on the food network... he made a "rocket" or "cannon" cake that shot real fireworks.....

Yep mac - I would say they take their football very seriously!!! Gross cake!!!

So was the bride from South Africa? Just asking. You won't believe with what

names the rock bands come up with here in South Africa.


BTW the spelling is Afrikaans.

Thanks Eliza for the spelling! I knew I got that one wrong.

No, she's not from S. Africa -- I don't know why they chose a word in that language. When I found out what the word (begins with a V) means, I couldn't believe that they would want that on their wedding cake! I must have looked like

when they told me, but I tried to keep my cool.

BTW the spelling is Afrikaans.

I just learned something new...I never knew that! I even had to look it up

Um, mine would be a nude female torso....from shoulders to upper thighs, which I do quite frequently, with and without bikini. But, this one was to be lavender "skinned" with darker purple "accenting". I didn't even ask why, just charge extra for the freakiness of it and went on my way.

Um, mine would be a nude female torso....from shoulders to upper thighs, which I do quite frequently, with and without bikini. But, this one was to be lavender "skinned" with darker purple "accenting". I didn't even ask why, just charge extra for the freakiness of it and went on my way.

LOL so what do you charge for "freakiness?"

You should post that pic (in the adult section, of course!)

Oh, I wish I'd taken a pic of it....but it was about three years ago and I didn't have my digital camera yet...lol

If I recall, I tacked on about $10 and they didn't bat an eye. I had another one that was "normal" colored, but they wanted a tattoo and a gold belly ring on her.

Well not as wierd as all of yours, but I had someone order 8 dozen petit fours with little american flags and elephants piped on top for a republican theme. But then she realized that the party that was running for office that she was throwing the party for was non-partisan ( is that spelled right?) anyway, so she changed the order to have his nae written on the petit fours and small flowers. I had already made half of the little miny royal icing elephants so I charged her for those. I still have about 4 dozen little elephants in a tupperware somewhere! Not sure I will ever have anything else to use those for!

My team at work was having a huge Halloween bash--we have a bit of a reputation for what we do at Halloween. This one year we did a murder mystery where people had to go to different offices for clues to help figure out who the murderer was. I was asked to make a cake with severed arms since that was part of the story line. So I made a sheet cake, had my hubby trace my arms and then cut two arms out of the cake. Added a broken finger, some bones sticking out the back of the arms and then took my decorator brush and flung red color gel all over the place for blood. Pretty nasty, but they they all loved it.

I've been chomping at the bit to share this one again... I did a full sheet cake for a wedding a few weeks ago. The couple just "woke up and decided to go to the court house and get married." The cake was decorated with BLACK BC; BLACK roses/buds and leaves; with VULTURES made from BC and resting beside two Harley motorcycles. Yes, BLACK...all over. The couple are members of a local motorcycle club/gang/chapter, whatever you want to call it. The bride CRIED when she was it. When a bride cries, it's not always a good thing. This one LOVED her cake, and has referred several people my way for "unique" cakes. LOL. I tried to get her to do a tiered cake...could've gotten much more creative, but she insisted that she was a "plain Jane" and didn't want anything "special." Go figure. Anyway, that's my contribution to this hilarious posting. I'm enjoying these stories.

Hm...the weirdest cake I've done so far would have to be the Jabba the Hutt cake I did for my nephew last year. Nephew wanted him to look gross and slimy just like the real thing. Well, Jabba ended up looking like a big pile of quacomole complete with bikini clad Princess Leah.

My weirdest request comes from my niece (his little sister) she wants a mystery machine, being chased by a UFO, a witch, and a "panfer" (panther) we'll see if I can pull all that off.