[SIZE=14px]In mixer bowl, combine Tylose & water, mix until completely clear.  Then add the other ingredients, one at a time, in the following order, blending well after each addition.[/SIZE] [SIZE=14px]Conf. Sugar, cornstarch, meringue powder, then corn syrup.  When all is added, beat on medium high for 4 minutes, scraping down sides of bowl with spatula as needed.  A hand mixer can be used because the amt. you are working with is so small.  Store in ziplock bag with all excess air removed or SV will dry out.  Pipe to make webs,nets, & flower outlines.  When using molds, leave flat to DRY WELL, before handling.  Bending the dry mold will break the lace.  If the finished items become too stiff, soften them by placing a slightly damp towel over item as needed to regain flexibility, then remove from mold & bend to apply to cake.  Store finished items flat in airtight containers or ziplocks.  Cleanup with hot water.  Sometimes the lace will rise out of the mold as it dries. [/SIZE]

How do you know when it's 'done'? That is, what is the certain appearance you're looking for after mixing for 4 minutes?

It will become a little thick, pasty, & sticky. Spread it with a flat edge onto the mold, scraping off any excess.  Let dry several hours, lift an edge to check for elasticity before removing completely.  If you wait until it is firm, just soften by laying a damp cloth over it for a moment or two as needed for the flexibility you are looking for.  I often slide the mold off the table onto my palm, support the middle & work the edges loose.  Less likely to crack.  I am a novice.  This was my very first mold, made 3 days ago, and it went well. What do you think?

Thank you for this, I've been wanting to try this for ages. :D

What do you think?

I've order from this place.  The molds are a long strip, about the length of a half sheet pan.  I tried them out, and one came out great, and the other I fought with.  I used Sugarveil, which I am not very impressed with.  I've ordered a couple of mats and the Sugar Dress product from GSA.  Should be here today. I'm hoping it's a better product, but will try this recipe out too.  I'll post my results with the Sugar Dress and if I get around to the other.

This site has some different designs, some are the same as GSA, but they are only one strip.  The real mats have at least three per, so not sure which is the better way to go.

I have used magic decor  of pavoni with  models like these lace mats.

can i used gumtex instead of tylose ... we dont get here in dubai

Cakelady247, You buy Pavlova Magic at the supermarket, i.e. Coles or Woolies or probably any other as well.

I have not tried gumtex in this recipe, but it seems to work in a lot of them as a replacement for Tylose.   It is not expensive, so why don't you just cut the recipe down into smaller amounts and try it.  In certain applications, gumtex does not thicken the way Tylose does, so it will not give the same elastic effect.  Tylose can easily be ordred from ebay, or other sites on the internet.  WalMart even carries it.  Hope this helps some.

I used  gumtex instead of tylose and it did not work.  :(

AWhy don't you try to find if you have gum tragacanth? Or try the other gums on half the recipe to see which one works? I think you can find the others.

I did try it but I ended up using a little more water.  The consistency just didn't seem right.  I used it with an inexpensive mat that I purchase from wholeport and it did work.  The first time I put too much on the mat and was impatient so it didn't come out too well.  I tried it a second time using much less and letting it dry a bit and it came out pretty good.  Didn't use it on anything.  It was just a test.

Are you associated with  'Bespoke Cakes by Etam'?

I just visited the site, and WOW!

The cakes are unique to say the least.  Beautiful.

Hope you will find the time to get back with us.

Melt MM in microwave in 30 sec. intervals till melted, stirring well after each.  Don't want to burn the sugar, now do we?  Use immediately, will harden as it cools.


I did try it but I ended up using a little more water.  The consistency just didn't seem right.  I used it with an inexpensive mat that I purchase from wholeport and it did work.  The first time I put too much on the mat and was impatient so it didn't come out too well.  I tried it a second time using much less and letting it dry a bit and it came out pretty good.  Didn't use it on anything.  It was just a test.

This was Goreti's post, and she was responding to the post above hers, which was about DawnEdwards recipe, which used Tylose.  So I feel sure she was using Tylose.  Hope this helped.

I think I may have figured out the recipe, and when I can figure out how to post pictures I will show you.

However, I am still perfecting the recipe, (still a little to thick to pipe, but good through an extruder) and as soon as I do I will let you know. It worked really well! doesn't stick, and dries flexible.

Can someone tell me how to post a picture???

Were you able to come up with that recipe yet??  Can I have it??  Please, please, please...I like the idea that it will dry AND remain flexible.

Even SugarVeil has to be put in an airtight baggy to keep it flexible.  Every recipe I have tried can do that, but none will remain flexible in the open air.  The only advantage that I can see with using SugarVeil over the other recipes, is that it dries, & can be removed from the mold, fairly quickly.  I came close, but after 24 hours it started getting a little brittle, would still flex some, but did break if I bent it too far.  That was with it sitting out on the table the entire time.  So we really do need your recipe, if you have finished it yet?  Thanx! 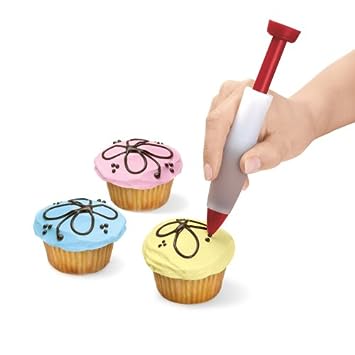 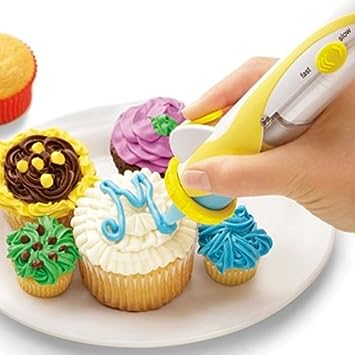 The E-Z DECO icing pen: Blue with the manual lever.  This gave the best control, and you could swap tips more easily, you could use ANY tip you wanted, and it produced the best results, with the least mess!.  It fit in the hand, as if you were holding a pen, felt normal.  And you could see what you were doing easily.  And better control the flow.  I even did some string work with it, using the frosting.  And a 4 row high over-piping, again using the frosting.  I could not do these with the other 2 pens.  I did not make royal for these tests.  This is not to say that this pen is any easier than just using an icing bag.  But the more I used it, the better I liked it.

The original plunger icing pen:   It did produce a nice thin line, BUT...If you squeeze on it WITHOUT holding the plunger down some, the plunger just gets forced back up and so you run out of icing, no pressure.  And if you apply pressure to the plunger as you write, it works, but is a little hard to control /stop the icing from coming out a little when you are done with a letter, and no longer want it to come out.  It does work, but not as well as the above option.

Battery operated Frosting Deco Pen:  I had high hopes for this one, but...  You can only use the tips that came with it, and the writing tip is just tooo big!  I like a finer line.  And it is messy to fill, the plate they provide for filling the pen from the bought icing container, really made a mess.  But the worst part was controlling the flow!  You have a fast and a slow speed.  The slow speed is fast enough.  You press all the way down to force the icing OUT.  Then you  back off the pressure HALF WAY to throw it into reverse, so the flow will stop!  If you let the pressure off the switch all the way WITHOUT this 'halfway' step, the flow continues and you have a mess.  I experimented with all the tips, was able to get them to work, but not how I would have liked...  I am a very unhappy camper with this one.

Maybe we can figure how to adapt a cheapo air brush to do the job??  Hope someone can figure this one out for us.  lol

Hi everyone!  Finally was able to upload the pictures, showing the results, of using each of these pens. This was done using the little pen with the plunger, #1 in the pictures.

Main drawback in my opinion, is that it does not hold enough icing, and it is hard to fill.

Probably not doing it properly.   And, yes, I can write a little neater than that!  It was running out of icing-again!

And it only has the one writing tip.

The E-Z DECO icing pen: Blue with the manual lever. This pic shows the best results that I was able to obtain, using tip #3 with the E-Z Deco icing pen, pic #2.

You can use any tip you want with this one, and NOT the others.  I did some quick string work on the container.

And a 5 high over-piping, that fell over because I did not let it set up between pipings, & I was using DH frosting.

Then I did a 4 high one that stayed put, also with the DH frosting.  . This pic shows how thick the icing comes out using the battery operated pen, #3 in the pictures.

The reg. piping tip has a hole that is just too large for any decent writing, IMO.

(JWinslow, I remembered that one! lol)

did you figure out how to do the sugar veil recipe? I would love to have it when you figure it out.

I did this last fall, it might help. It would be easier to just go buy a bag of sugarveil, though, as far as how often you'll use it (not often). http://acaketorememberva.blogspot.com/2013/10/homemade-sugarveilelastic-icing.html

Once again you have come through with something realistic, and doable, thanks!

You posted: I did this last fall, it might help. It would be easier to just go buy a bag of sugarveil, though, as far as how often you'll use it (not often). http://acaketorememberva.blogspot.com/2013/10/homemade-sugarveilelastic-icing.html

ADo you bake it or let it set overnight?

This isn't sugarveil, but it is used in decorating, and works with most molds.  Check it out.
http://cakecentral.com/t/769021/homemade-gel-for-decorating-cakes-recipe

Hi I am a newbie, I too am looking for the sugarveil recipe, I have tried the original recipe but it did not work I think to much icing sugar. I have looked at the recipe with the corn syrup, but the sugarveil that I bought was just white mixed powder.  so I don't think the corn syrup will work. and I think tylose will only make it brittle and hard so it will not be flexible. Any one with more idea,s