AAAAhhh. This is a crazy crazy topic. I have to get my 2 yr old in the bath. I'm quite certain in my latest busy-ness she hasn't had a bath in two days. Ew.

You should see my kids right now. They just got done with lunch and need a bath, too, because their faces and bellies are all red from Spaghettio's.

I love this place. Cake_Freak you've made me hungry talking about spaghetti. I really need to lose some weight. Stop it!!!!

Where is the recipe for the duff butter cream? My search function isn't working too well for this site, for some reason.

mmm. someone suggested I use fudge instead of bc. yummy. I want to try duff's but I hear its really buttery. Though butter and choc are good combos too.

I want to show off so I'm afraid to try a new recipe.

Yeah, she was pretty yucky. I try to not give her spaghetti-os or spaghetti just cause of the mess. She loves to put the bowl on her head. WHEN ITS FULL!


*Cook's Note: Make sure to have a completely clean and dry mixing bowl when you start your process. Any fat or liquid at all in the bowl will stunt the protein development of the albumen (egg white protein) and you will not have a proper meringue at the end. The results could be disastrous.
Start whipping egg whites slowly in the mixer until foamy. Increase the speed of the mixer and slowly start adding the sugar until all the sugar is incorporated. Once all the sugar is in, increase the speed of the mixer even more and whip until the mixture is shiny and stiff. You now have a meringue. You know when your meringue is done when you pull out the whip, hold it horizontally, and if you have what looks a "sparrow's beak" on the end of the whip.

Replace the whip, turn the mixer on medium and start adding the butter a bit at a time. Once all the butter is incorporated, turn the mixer on high and let mix; depending on the weather, the buttercream could take anywhere from 5 to 15 minutes to form. You will know when it has formed when you hear the motor of the mixer start to slow down and whine a little bit; also, when you first add the butter, your meringue will break down and look weird and this is what you want. When the buttercream is done, the mixture will be homogeneous, consistent, and tasty.

Remove the buttercream from the bowl and transfer to an airtight container. Buttercream can be kept at room temperature for a few days or in the refrigerator for a 1 to 2 weeks, but always use warm buttercream when icing a cake. To warm up the buttercream, put it back in the mixer using the whip or the paddle, and apply direct heat with a propane torch you can find at any hardware store.
Source:
Contributed by: jen13 on Sunday, August 27. 2006 at 15:17:51

Sue sells sea shells,
She sells them by the sea shore

Raise your hand if you remember "Heckle and Jeckle"

Were those the guys in the Highlights for Children magazine? 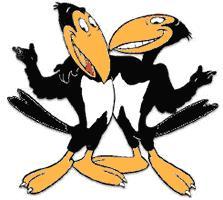 Nope, that was Goofus and Gallant. I asked my mommy.

I can actually hear myself getting older.

My SIL lives in Monroe, NC just the way I like it.

I learned from Doug, you have to wait a couple minutes for the pics to show.

My SIL lives in Monroe, NC just the way I like it.

LOL! I know the feeling. And once I refreshed the screen, I did see the pics.

Also, I just made a batch of the infamous duff's buttercream and let my husband taste a spoonful. His reaction was: [lips curled] "Ewwww, it tastes like butter, maybe it would be good if it were on a slice of bread." I on the other hand love butter and thought it tasted good. So, I'm sure that is absolutely no help to anyone, but it's my experience. Yes, I'll make it again because it is not sweet at all, but when I make it for others, I'll be sure to use it as a filling so that it will be mixed with something.

Thanks, mite for sharing that info. I think I'll pass on that BC. Besides I have a good recipe that everyone likes. My husband and daughter gets upset with me if I change a recipe. They always tell me "leave well enough alone".

I still gotta find "my" buttercream.

For you un-young, heres a joke I just got in my email.

A little old man shuffled slowly into an ice cream parlor and pulled himself slowly, painfully, up onto a stool. After catching his breath, he ordered a banana split.
The waitress asked kindly, "Crushed nuts?"
"No," he replied, "Arthritis."

itsloops:Sue sells sea shells,
She sells them by the sea shore

and my back has 1 tattoo so far! lol yes im planning for more of both tattoos and peircings)

cakesbymonica: OMG that joke was funny!!!!

Monica, here is the recipe I use and my family says it's a keeper.

Cream butter, shortening, and extracts until light and fluffy - about 5 minutes.

Add flour to creamed mixture. Beat until thoroughly combined. Add powdered sugar, about ½ lb. at a time beating until combined. When all Sugar has been added and combined, add 2-4 Tlb. Milk, depending upon consistency desired. Beat for an additional 6-9 minutes on medium speed.


Plunk, plunk, fizz, fizz oh what a relief it is.

Thanks so much! I will definitely try it!

Does anyone remember a commercial with a kid in a walker, running all over the house, up the walls and then the mom leans over and gives him "the look" and the kid takes off again? I think it was a carpet commerical when I was 8 or so. I just remember it being so funny.

I seem to remember it and I think it was a carpet commercial.

Remeber the commercial (I think jeans) where kids wher sitting on their butts and had their hands on a pretend steering wheel. Then they would move down the road fast. I remember they said they when they made the commercial they would shoot the frame have the child move a couple of inches and then shoot another frame. It took forever to make that commercial.

You always have room for Jello

CAUSE OSCAR MEYER HAS A WAY WITH B-O-L-O-G-N-A!


To this day I have to sing the song to spell baloney.

I don't remember the carpet commercial but I do remember the "Where's the beef" old lady as if it were yesterday. LMAO!!!

I only have 1 tattoo. No more for me.

It was one of those things to do for my 30th birthday.

ahh it hurt but no biggie lol

I don't know if I want to become involved in the insanity, but I've been lurking on this post from the beginning!

Janette, your buttercream icing looks good.... does it crust??

It gave me vertigo.

I don't know if I want to become involved in the insanity, but I've been lurking on this post from the beginning!


Too late, you've fallen into the trap!

Move your right foot, clockwise in a circle and then draw a 6 with your right hand.